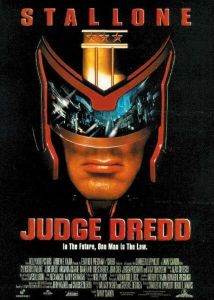 This week’s look at Stallone takes us into the often-iffy realm of the comic-book movie. As Batman proved adults could enjoy characters in tights, companies sought to find characters to turn into live action heroes and rake in the profits. Stallone also turned his sights toward the four-color pages for a superhero. Somehow, he ended up trying to become Judge Dredd.

I actually went to see this one in theaters on its opening weekend as it was a thing my pal Allen and I did in those days. If I remember my thinking, I was out to support any comic book movie, no matter if I’d read the comic it was based on or not. The 1990s was a weird time with comics like The Crow getting made into decent movies. It was possible that Stallone had found collaborators to make him a worthy costumed hero, right?

Well, if he ever bothered to wear the damned costume.

Sometime in “Third Millennium,” as the helpful narrator tells us, the Earth has been ravaged by war and the few cities left are huge, but somewhat lawless. The Law has been given over to an elite group known as the Judges. The most effective and ruthless judge of all is Dredd. As we see in his first scene in which he judges Rob Schneider guilty of something and sentences him to five years in the Aspen penitentiary. I wish he was guilty of lazy comedy. I also wish it was the last we see of him, but …

So, some sixteen minutes into the movie, the main character takes off his helmet and ceases to be Judge Joseph Dredd and turns into action hero Sylvester Stallone. This really, is the main downfall and greatest flaw of the film as Stallone, the credited screenwriters, the producers, and director Danny Cannon (who won a “Design a Judge Dredd Movie Poster” contest in his teen years) failed to grasp a basic notion about Dredd: he is the faceless symbol of The Law. In the finished film, Dredd spends most of his time out of his iconic costume.

Dredd as he should look.

And spends most of the film’s run-time looking like this: 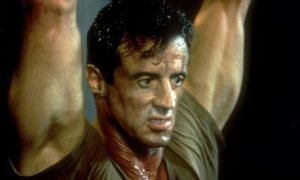 Standard attire for Stallone at the time.

So, the plot of the film concerns the return of corrupt Judge Rico and his partnership with corrupt Judge Griffin, who engineers a crisis that takes both Dredd and Chief Justice Fargo out of play and allows him to re-start a cloning project that actually produced Dredd and Rico.

Oh, did I forget to mention that Dredd is a clone? Yeah … that happens a lot in the future.

So, Dredd, now stuck with Schneider’s character, must make his way back into MegaCity One, exonerate himself and stop Rico and Griffin’s mad scheme, all the while not wearing a helmet. Meanwhile, Judge Hershey, Dredd’s nominal love interest, continues to investigate his case and learns of Griffin’s cloning initiative that just happens to have the clever name of “Project Janus.” See, it’s cute because … oh, never mind.

While still in the nuclear wasteland outside the city, Dredd and Schneider get captured by a group of post-apocalyptic hillbillies known as the Angel Gang. Oh, they’re from the comics, too, but share only a few visual similarities. Instead, they play up the yokel aspect and Dredd dispatches them in a way that is disproportionate with the threat they actually possess in their scene. I guess this was the sort of violence that parent-groups use to crow about at the time.

Back in the city, Griffin introduces Rico to a scientist played by Joan Chen. I suppose she has a name, but the movie doesn’t seem all that concerned about it. Hell, it doesn’t even care about her motivation. In her initial scenes, she hates Rico, but is soon — inexplicably — in love with him. I guess you can chalk that up to the charm of Armand Assante, who plays Rico. I suppose it could also just be the screen persona Joan Chen cultivated back then. She liked to play with fire.

So, as you can imagine, Dredd and his comic-relief troll make their way back into the city and Rico double-crosses Griffin and everyone meets at the statue of liberty for a big showdown in the cryogenics facility where all the Janus clones have been kept for–

Wait a minute! This is a movie that features Sylvester Stallone as a future-cop in a screwy fascistic society who must track down his sworn enemy, culminating in battle inside a cryogenics facility? I’m watching Demolition Man again, right?

Fuck, and Rob Schneider’s here too? What the sam-scratch is going on?

This is the second great flaw of the film. The script is such a depressingly bog-standard 1990s action movie affair that it mirrors a film Stallone made not two years previously! Honestly, though, I can’t blame him for that. He doesn’t have a script credit on this dog and probably chose it because it felt familiar, even as the Dredd veneer seemed fresh. It also facilitated his progression at the time.

Since the Comedies, Stallone chose to follow the action hero path of his pals Bruce Willis and Arnold Schwarzenegger. From Cliffhanger to Demolition Man, he was getting ever closer to the ideal: a superhero. Unfortunately, the only comic book project ready for him at the time was this … a script that functioned decently enough, but fails to understand the character, world, and tone of the source material.

Just a little aside here about tone. In its native England, “Judge Dredd” is a satirical comic strip in the pages of a magazine called 2000AD; covers of which appear in the opening credits of the film. What makes Dredd interesting is how he actually chafes at the hero-cop mold. His world is lawless, but the way he has been trained to enforce The Law de-humanizes him and his victories are often punch lines to long jokes about intrusive governments and potential police states.

The film, in turn, is about Stallone Character B (the Force of Freedom) getting a tough lesson about lenience thanks to “lovable” comic Rob Schneider. I hope you can see the tone problem here. This is an on-going issue with comic book movies as seen through the examples of Captain America and Green Lantern. The most recent Marvel film is fun, snappy, and skirts the line of camp and seriousness. By setting it during World War II, the character is allowed to be straight-faced about his patriotism. It’s the perfect treatment of the source material. Green Lantern, on the other hand, is about shoving the beloved space-cop into the familiar structure of a Batman or Spider-Man film instead of trusting the adventure elements of the comics.

The same is true of Judge Dredd. The character is forced into an uncomfortable format. The film takes the character far more seriously than anyone involved in the comic ever has. Writers Michael De Luca, William Wisher Jr. and Steven E. de Souza miss that parody aspect of the Dredd milieu and, as a consequence, the movie is laughably earnest. Of course, that sort of earnestness is why we enjoy Stallone so much.

Okay, before I wrap up, we need to get back the cryogenic lab. In the Demolition Man entry, I said the scene in this film is more successful. Why? One reason: Armand Assante. Just enjoy this scene as an example of his standard line-delivery in the film:

Assante makes for a much better antagonist than even the noted crazy of Wesley Snipes. When Passenger 57 gives you kooky quips, Assante SHOUTS! HE ALSO SHOUTS SOME MORE! AND THEN HE OVER-PRONOUNCES WORDS LIKE “THE LIIIAAWWWW!

Clearly, he’s the sort of actor I like to see in movies.

The sequence also gives Judge Hershey a bit to do in fighting Joan Chen’s inexplicable scientist character. Hershey was played by Diane Lane and she’s always nice to see in a movie. Around the time Judge Dredd came to cable, Indian Summer was also in heavy rotation, making Lane a crush for many young lads looking for seemingly attainable cuteness. 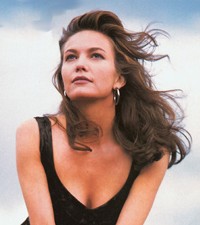 The Future of Law Enforcement

I know, I just digressed again. The thing that really makes this cryogenic lab fight better than the one in Demolition Man is the way they climax. In the earlier film, Stallone’s character freezes the bad guy and shatters him. Here, Rico falls off the Statue of Liberty after Dredd offers this Bond-worthy quip: “Court’s adjourned.”

Oh, this film also features the obnoxious runner, “I knew you’d say that.” Stallone’s Dredd utters the line to all the people he judges … it then comes around as a charming quip at the end after Hershey gives him a kiss.

This is the level of insight we’re dealing with here. 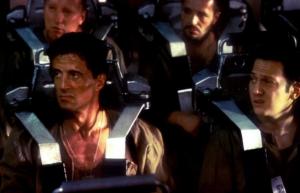 Also, if you haven't noticed, Rob Schneider is in this.

Director Danny Cannon claims much of the deviations from the source were at the behest of the star. I imagine that’s true, considering how much the film feels like an extension of Demolition Man, but at the same time, Cannon is complicit in the film’s tone, excessive violence, and the presence of Rob Schneider. So, really, no evading blame on this one. Cannon would go on to direct I Still Know What You Did Last Summer and to create the visual grammar of “CSI: Crime Scene Investigation.” He also serves as a producer on all the “CSI” spinoffs and “Nikita,” so it seems his talents were better suited for television all along. Stallone would step back from the scale his Planet Hollywood pals played on to appear in more subdued action fair like Assassins and Daylight, leading to his attempted return to drama with Cop Land and his eventually path into the wilderness.

Stallone In His Own Words:

“I loved that property when I read it, because it took a genre that I love, what you could term the ‘action morality film’ and made it a bit more sophisticated. It had political overtones. It showed how if we don’t curb the way we run our judicial system, the police may end up running our lives. It dealt with archaic governments; it dealt with cloning and all kinds of things that could happen in the future. It was also bigger than any film I’ve done in its physical stature and the way it was designed. All the people were dwarfed by the system and the architecture; it shows how insignificant human beings could be in the future. There’s a lot of action in the movie and some great acting, too. It just wasn’t balls to the wall. But I do look back on Judge Dredd as a real missed opportunity. It seemed that lots of fans had a problem with Dredd removing his helmet, because he never does in the comic books. But for me it is more about wasting such great potential there was in that idea; just think of all the opportunities there were to do interesting stuff with the Cursed Earth scenes. It didn’t live up to what it could have been. It probably should have been much more comic, really humorous, and fun. What I learned out of that experience was that we shouldn’t have tried to make it Hamlet; it’s more Hamlet and Eggs…”

Stallone By the Numbers:

Times Schneider does his feeble impression of Stallone: 1

Erik Amaya is the host of Tread Perilously and the former Head Film/TV writer at Bleeding Cool. He has also contributed to sites like CBR, Comics Alliance and Fanbase Press. He is also the voice of Puppet Tommy on "The Room Responds."
View all posts by Erik →
This entry was posted in Projected Pixels and Emulsion and tagged armand assante, Judge Dredd, stallone, the stallone diary. Bookmark the permalink.