GTA V and the Ick of Being a Gamer

Please refer to the this Tumblr post as I do not have the ability to make an image at the moment.

So, as you might guess, I’m playing GTA V at the usual snail’s crawl pace I play every video game because I’m a completist (completionist? We need to finalize this word). I must discover everything. I’m nearing the 45% marker and I have to say it’s probably the best GTA yet, with San Andreas just behind it. I’ll save my fuller thoughts on the game and my opinion of IV for another day. Today, the key issue I want to explore is the rise of male gamers feeling threatened by those who criticize the sexist and chauvinistic streak in the game (and, as it happens, feel threatened by the existence of female gamers).

Take another looks at the image in that Tumblr post. Here’s the problem with GTA V: I’m enjoying it a great deal, but I don’t espouse the attitudes of the Youtube commenter. I don’t think the game is giving me my balls back. As it happens, no one ever took them. I also don’t look to a video game to give me, ahem, titillation.

What I want from GTA is some silly mayhem, not a digital strip club. The game features a strip club mechanic, the object of which is to get the stripper to take you home for an night of “hot coffee.” While the Youtuber seems to get off on poorly rendered digital boobies, I find the whole thing absurd. Such a minigame makes sense in the hyper-real satire of GTA, but it’s still kind of crass and if there is a satirical point to be made by gaming digital strippers into unseen digital sex, it’s certainly lost on a part of the fanbase.

Then again, this is the same game series that tried to make sex itself a minigame. Satire may not be the point.

And while the mere presence of the strip club mechanic does the game no favors, more troublesome is the storyline itself. The main characters are compelling for various reasons, but the few female characters I’ve seen at the 45% completion mark are generally unlikable and fit into the usual tropes and stereotypes: Michael’s wife is an ungrateful, spendthrifty shrew who screws around with her high-priced fitness instructors, his daughter a fame-whore just short of doing the deed to get her fame; Franklin’s aunt pretends to get in shape and in touch with her “girl power.” Trevor is the only character to have a friendly female presence, so far, by way of Maude, a Jabba-esque bounty hunter who sends Trevor off to capture bail-jumpers. It’s interesting that the only female voice that could be interpreted in the game — at least as far as I’ve played — as “sympathetic” is drawn physically grotesque. I’m not entirely sure what the take-away is supposed to be from that. 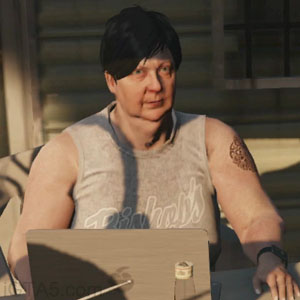 Seriously, Trevor and the game have actual affection for her.

This is actual game footage.

And the choads carrying on about the need to reclaim their manhood via this game isn’t making it any easier.

It’s astonishing to watch this tide of resentment appear as video games, the entire past time, are pretty much evenly distributed between the sexes now. Some are genuinely threatened by the appearance of women in their hobby. Me? I’m pretty happy to know some fantastic women I can talk games with; I fail to see how it’s a threat. Then again, I’m not the most masculine person out there, otherwise, I might be terrified or something because someone noticed parts of a game I like are sexist and misogynistic.

To even allow a video game so much power that a few valid criticisms of its sexist content threaten your identity is just … well, sad. Ron Swanson would be ashamed of you.

Erik Amaya is the host of Tread Perilously and the former Head Film/TV writer at Bleeding Cool. He has also contributed to sites like CBR, Comics Alliance and Fanbase Press. He is also the voice of Puppet Tommy on "The Room Responds."
View all posts by Erik →
This entry was posted in Armchair Philosophy, Level Up, Nerd Alert and tagged digital thingies, getting my balls back, gta v, manhood, sexism, video game. Bookmark the permalink.