As surprising as this may sound to some of you, “Star Trek: The Motion Picture” has never screened at a Yakmala event. This might even seem like an oversight, but honestly, the will has never been there to screen it. Justin avoids it, reciting his mantra, “I’ve never seen it,” whenever the film is brought up. For me, the film is somewhat special.

For years, I had a VHS copy of the “Special Longer Version” that sat unwatched as part of a box set. Oh, there were a couple of false starts, but the movie was largely a mystery to me, glimpsed only in clips. When I finally sat down to watch it, something remarkable happened: I fell asleep.

In fact, it kept happening every time I tried to watch it. While the movie still eluded me, I was happy to have a cure to my sleeping problems at the time. By the point the Enterprise set off on its mission, I was out cold.

That said, I did eventually see the “Special Longer Version” all the way through and discovered the beginnings of an intriguing and thoughtful film. The main problem with the movie: it’s overthought, overproduced, and underwritten. That said, I think “Star Trek: The Motion Picture” is too easily dismissed by fans and film geeks. So, today, I’m going to defend the film.

Okay, maybe “defend” is a strong word. I’ll call out some of its rarely mentioned finer qualities while remind you why it’s been relegated to a poor status alongside the fifth film and “Star Trek: Nemesis.”

If there is one thing the film gets right, it’s the music. Jerry Goldsmith’s score is sweeping, magical, and lush. The main theme that he composed for the film came to be THE theme for “Star Trek” into the 80s and featured every week on “The Next Generation.” Beyond that, the score carries a lot more weight than it normally would. As production slogged on, Goldsmith’s music was one of the few things working for director Robert Wise. In a film full of long special effects shots and equally long shots of people looking at a big TV, Goldsmith filled in a lot of the missing drama. Consider the music that plays during the cloud sequence or the journey across the V’Ger vessel. They suggest a much bigger, mysterious, and interesting confrontation to come once the Enterprise makes contact. Consider the love theme for Decker and Ilia; I’m pretty sure it’s the only one ever written for the film series. That piece of music even appears as an overture to the film on home video.

Having listened to plenty of Goldsmith’s scores, it’s easy to see why this one came out a little bit extra: it benefited from his treatment on “Alien.” The sweeping, somewhat nautical strands appear in that score as well. Director Ridley Scott was less impressed with that broadening of the scope and pulled back the score to a large extent, opting to use soundscapes and older Goldsmith music. The composer was furious. “Star Trek” director Robert Wise clearly gave him a (mostly) free hand to make the big, spacey music he wanted to write. The results are a set of compositions that belong in a film that is much, much better.

Without a doubt, the effects in the film are very special. I don’t mean that in a sarcastic way. The effort put into the work is easy to see on screen. The models are very well rendered. The various close-ups of the V’Ger ship are nothing short of spectacular. This quality came with a certain amount of difficulty for the director. He eventually called in FX guru Douglas Trumbull to redesign some of the shots and completely transform a sequence in which Kirk and Spock enter an inner chamber of V’Ger and Spock gets attacked by … um … floating data.

A shot from the aborted "Memory Wall" scene.

What Trumbull gave the film is its trippiest, most interesting series of effects: the Spock Walk. Instead of awkwardly floating on a poorly made set, Spock’s visit to the inner chamber sees him reliving V’Ger’s journey from a planet of living machines, across the universe to Federation Space and, finally, Earth. Instead of a literal flashback, the sequence suggests much of the journey, only offering a few concrete details. Some of it resembles a Yes or Journey album cover, but it is a truly unusual scene. Trumbull also gave the world the actual realization of “2001’s” famous Star Gate sequence, so the Spock Walk is very much a version 2 of that scene. Much of it is what the effects designer calls “First Person Cinema” — a technique that puts the viewer right in the eyes of the character.

He also brought that philosophy to Kirk’s first visit to the newly re-fitted Enterprise. The sequence is a showcase of model work, first person cinema, and even blue-screen technology. There’s one shot where Kirk and Scotty look out over the ship’s saucer section where the scale seems off and the ship is clearly a model, but other than that, the sequence is well executed.

In terms of story, it goes on way too long. While I understand the intention of the scene, giving both fans and Kirk a long look at their ship lovingly remade and updated, it means Kirk doesn’t set foot on the ship until the 25 minute mark. It’s something like 5 minutes of model work and music. That lack of urgency betrays the supposed threat of the approaching V’Ger.

It's only a model.

Same goes for the endless cloud sequence, the shots of the V’Ger ship, the wormhole sequence, and any number of dull scenes where the characters talk to one another. Which leads us to the thing that really sinks this project.

At the core of “The Motion Picture” is a really great science fiction idea. A NASA probe returns to Earth having completed its simple program and attaining consciousness along the way. Believing its creator to be a machine intelligence, it threatens to wipe out all organic life on Earth unless the creator makes contact. Yeah, it reeks of a 1970s New Age-y softness, but the prompt itself has a lot of potential.

Sadly, the script, attributed to Harold Livingston, never really explores any of its threads in a satisfying manner. At the start of the film, Kirk is stuck at an Admiral’s desk and manipulates the emergency to get back in the center seat. McCoy calls him on it, but that plot pretty much submerges with the arrival of Spock.

For his part, Spock is more distant that ever. Since leaving Starfleet, he was training in a discipline to purge his remaining emotions. He breaks the training when he senses V’Ger. He calls this intelligence a being with “thoughts patterns exactingly perfect order.” The movie sets up the possibility that Spock could betray the mission in order to understand the entity, but that never goes anywhere, either. At the end, Spock declines to return to Vulcan as the experience has settled his conflict with his human side.

Yeah, I don’t get it either.

In fact, the movie never quite gets it. In an early scene on Vulcan, the priestess in charge of Spock’s training informs him that the consciousness in space calls to his “human blood.” If that is the case, why does Spock talk about “perfect order.” In a better script, Spock’s speech about order could simply be a concealment of his real intent. I know, Vulcans don’t lie … but Spock can exaggerate. Once he is comfortable again with his best friends, he could admit to the emptiness he both senses in V’Ger and felt while undergoing to final stages of the Vulcan ritual. Yeah, he says as much in the final film (or, at least, the Longer Version), but none of these scenes sync up with one another. In “The Motion Picture,” we’re just forced to accept the inconsistencies and move on.

Same goes for Kirk’s obsession with commanding the Enterprise, Ilia’s apparent death at the electric tendrils of an alien probe that later takes her form, McCoy’s retirement, Scotty’s mustache and the rest of the bridge crew’s apparent lack of promotions. Of course, going into those threads would mean conflict, a thing Star Trek creator Gene Roddenberry was desperate to avoid at the time.

A medallion and a beard?

Roddenberry created a myth of peace within “Star Trek.” In his vision, the Earth was a beautiful, rational world where people learned to avoid conflict. There was no monetary system and everyone was dedicated to seeking knowledge and understanding. Oh, they also spread this message across the galaxy.

Then you actually watch one of the old episodes of “Star Trek” and see that this philosophy came at the edge of phaser. In fact, the show becomes interesting because Roddenberry’s ideals came into direct conflict with a television environment that needed fisticuffs and explosions. That tension makes the show interesting even today as seen in its best episodes. “The Motion Picture,” on the other hands, reveals the primary problem with Roddenberry’s vision of a peaceful future dedicated to exploration.

Every attempt at interpersonal conflict in the movie gets ignored, the threat of V’Ger is bogged down in the wonder of exploring the massive vessel, and Decker’s ultimate decision to merge with the machine lacks the impact it should have. 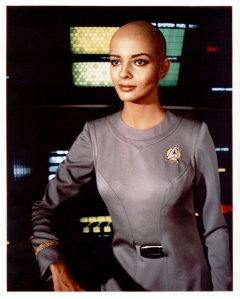 Her only defining trait: a lack of hair.

At the same time, the story perfectly reflects a high-minded sensibility that infected science fiction filmmaking in the wake of “2001: a space odyssey.” Many early 70s sci-fi flicks (such as “Silent Running” and “Solaris”) move at a snail’s pace as they consider an esoteric concept that borders on the spiritual. “Star Wars” ended that era, but a few hangover productions, like “The Motion Picture” got a monetary boost from the arrival of the blockbuster age.

While certainly not for the casual movie-watcher, “Star Trek: The Motion Picture” offers a great deal to those willing to look beyond its obvious flaws. It is a striking example of practical effects in the late 1970s, a buffet of great art direction (minus the awful costumes, obviously), and an example of what happens when big budget movie making attempts something different. Of course, it lacks a lot of things that make up a compelling drama. Perhaps it is important to look at the film as an excavation. Digging under its surface is interesting and the story of its creation far more riveting. Of course, you’ve got to watch the film in order to get there.

Erik Amaya is the host of Tread Perilously and the former Head Film/TV writer at Bleeding Cool. He has also contributed to sites like CBR, Comics Alliance and Fanbase Press. He is also the voice of Puppet Tommy on "The Room Responds."
View all posts by Erik →
This entry was posted in Projected Pixels and Emulsion and tagged Douglas Trumbull, Jerry Goldsmith, special effects, spock, star trek, The Motion Picture. Bookmark the permalink.