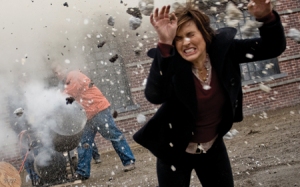 Scene depicted is not from this episode

Uncomfortable Synopsis: An aggressive teen leads to homicide at a prep school.

Benson: “Did you see Agnes this morning?”

Plot: When a tow truck crew finds frozen blood dripping from a car, SVU detectives Stabler and Benson respond to the scene. The body of a high school girl is found in the trunk of the car, naked, stabbed, and slashed. Oh, there are also cigarette burns on the body. She is quickly identified as Emily Sullivan.

The detectives interview the father who says he let Emily spend the night at the home of Andrea Kent. They quickly go to the Kents and learn Emily spent no time at the house the night before.

They proceed to Tanner Day School to talk to Andrea Kent and Emily’s other friends Brittany and Paige. When they prove to be less than helpful, Stabler calls the number Emily’s father claimed was the Kents, only to find Brittany’s cell phone ringing and a voicemail greeting claiming to be the Kents. The girls finally reveal Emily had a date with an older man. Well, older meaning “like 23.” The girls all sob.

Going through her locker, the detectives discover Emily’s older man was Lucas. He’s an an actor. While shooting a commercial dressed as grape, Lucas claims he broke off their relationship when he learned she was underaged. It also turns out he was on a movie set all night as an extra.

The detectives find Emily’s cell phone in the hands of a comic shop employee calling a sex line. Turns out Emily was sending abusive messages to one Agnes Linsky. She is a rather large person. Benson interviews Agnes. Turns out Emily and the others had been bullying Agnes for years.

And then Brittany’s attacked by Agnes’s brother Troy. While zip-tied, Troy tells Stabler that Brittany took photos of Agnes while she was changing in the locker room. At the hospital, Benson confronts Brittany with the photo. She believes Agnes killed Emily.

At the crime lab, the detectives learn manicure scissors were used in Emily’s death. The lab tech also found dyed hair in the duck tape used to bind Emily. “Know any bottle blondes?” she asks.

Back at the squadroom, Dr. Huang suggests the girls could’ve been motivated to kill Emily because of some betrayal. At Tanner Day School, he learns Emily hooked up with Brittany’s boyfriend … someone named Lucas.

Benson and Stabler call on young Lucas and gently remind him Brittany is also sixteen. Lucas tells them Brittany told him to hit on Emily as a “friendship test.” Turns out he’s terrified of her because he suspects Brittany poisoned his cat. He also reveals Brittany, Andrea, and Paige turned up at the film set in Emily’s car that night, but Emily was no where to be found.

Stabler and ADA Novak break Andrea and Paige. The girls reveal that Brittany went crazy and attack Emily. When Cragen tells Brittany the girls rolled on her, she loses her shit. Novak charges all of them with Emily’s murder. Brittany implicates the girls and Novak makes a deal with her to testify against them in court.

At trial, Andrea mentions she used her birthday as a way to get Emily to go with them that night (I should probably mention it’s January in the episode). Novak notices Andrea is wearing a class ring with a September birthstone. Turns out Emily’s ring was missing. Caught, Andrea turns on Paige and claims she gave her the ring.

The girls are found guilty and all is well.

Oh wait! Shots fired at Tanner Day School. Agnes killed a random popular girl for spray-painting “Anges the Pig Squealed” on the lockers. Agnes tells Benson, “they went to jail and it didn’t stop. It was never going to stop.”

Why it is fourth best in show: Surprising in its lack of more outlandish or controversial issues, “Mean” does continue the trend of well-off criminals that marks the Top Five. In this case, it’s a group of popular girls.

SVU had no problem taking the upperish classes of New York to task in these years and the episode clearly identities with the bullied. Agnes’s fate is seen as tragic. Early on, Huang mentions its easier for school administrators to identify with the normalized, popular kids and to label the marginalized kids as “over-sensitive.” Planting this flag, the girls are indicted well before ADA Novak presses any charges.

For an added ironic touch, the girls are always coded with very innocent colors (well, except for the coat Brittany is wearing when she’s arrested).

The tension in the story is watching how these “little angels” are caught in a lie, how it all unravels and, eventually, how they all turn on each other. All of it dramatized in that overwrought SVU way. It’s not enough to have a murder, the murder must investigate the small mob mentality of tightly-knit groups and how it could lead to vicious acts. The episode also has a certain velocity as you learn more and more about these popular girls and how they go past mean into lunacy.

From the moment I stepped into (an all boys) high school, my first goal was to be done with it and escape to college. Consequently, the social strata meant very little to me. I made sure to throttle the first person to pick on me within the first week and never had to deal with the possibility of bullying again. I had friends, but not an identifiable clique. With attention focused on the gang element within the school, I was essentially invisible. So while I’m aware high school can be a pressure cooker for some, these sorts of stories always seem a little unreal.

When I showed the episode to Justin and Louis, we labeled Agnes “White Precious.” We’ve referred to the episode by that name ever since. Clearly, it’s just that easy to tease the overweight.

Erik Amaya is the host of Tread Perilously and the former Head Film/TV writer at Bleeding Cool. He has also contributed to sites like CBR, Comics Alliance and Fanbase Press. He is also the voice of Puppet Tommy on "The Room Responds."
View all posts by Erik →
This entry was posted in Projected Pixels and Emulsion and tagged law & order, special victims unit, television. Bookmark the permalink.