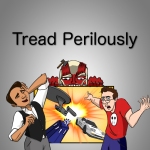 When Spenser’s old boxing manager comes back to town asking for a favor, he soon learns the guy sold him out to be murdered. Despite this, Spenser still wants to help his old pal — even when Hawk rightly surmises that the former manager is bad news. But when Spenser learns who really wants him dead, he decides to walk into a various obvious trap. Will Hawk bail him out in time or will Spenser be for hire no more?

Erik and Justin try to determine if a boxing plot always leads to a poor episode of television. It, of course, leads to a Battlestar Galactica discussion. They also realize the four main Spenser characters are all in different series and pay all due homage to a man called Hawk — which has nothing to do with his resemblance to the Emissary. Justin outlines the Latverian quarter of Boston: Little Doomstadt. He also tries to explain “covering the spread” in a sports context to Erik. Johnny Five Fishes, the Passive-Aggressive Gangster makes his debut. The pair fall in love with John C. McGinley’s late-80s yuppie scumbag character and try to re-envision him as DC Comics villain the Sportsmaster.

Erik Amaya is the host of Tread Perilously and the former Head Film/TV writer at Bleeding Cool. He has also contributed to sites like CBR, Comics Alliance and Fanbase Press. He is also the voice of Puppet Tommy on "The Room Responds."
View all posts by Erik →
This entry was posted in Transmissions, Tread Perilously and tagged battlestar galactica, DC Comics, John C. McGinley, podcast, Spenser For Hire, star trek: deep space nine, The Sportsmaster, Tread Perilously. Bookmark the permalink.