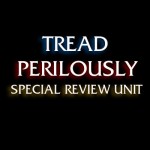 Tread Perilously once again opens the case files of the Special Review Unit with an episode of Law & Order: Special Victims Unit they had to call “Abuse.”

When Manhattan SVU detectives are called to the scene of a child killed by a car, they discover he is the adopted son of rock stars Ricki Austin and Jared Black. Ricki believes he ran out in pursuit of the man who allegedly abused him, his former computer teacher. But while visiting the family home, Detective Olivia Benson meets Ricki’s daughter, Ashley, who becomes immediately and profoundly attached to the detective; suggesting a case of extreme parental neglect. Soon, Benson finds herself fielding constant phone calls from Ashley and trying to use the system to get the kid some help. But will everyone from Ashley’s parents to Captain Cragen see this as Benson’s attempt to steal a child?

Erik Amaya is the host of Tread Perilously and the former Head Film/TV writer at Bleeding Cool. He has also contributed to sites like CBR, Comics Alliance and Fanbase Press. He is also the voice of Puppet Tommy on "The Room Responds."
View all posts by Erik →
This entry was posted in Transmissions, Tread Perilously and tagged law & order: special victims unit, Paul Lynde, podcast, special review unit, Tread Perilously. Bookmark the permalink.