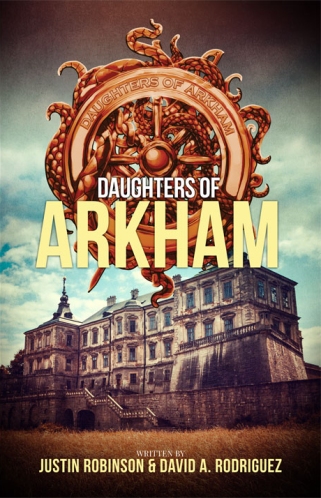 Writing is generally considered to be a solitary pursuit. It’s what misanthropes like me do to remain connected with the rest of humanity. If I had any kind of interpersonal skills I’d be able to work in an office like a normal person. Yet writing is strongly collaborative, regardless of how you do it. More so in other media, like film or comics, but even if you’re sitting down to write a book, a ton of people are going to read that thing and tell you what they think before it gets within sniffing distance of a press. There is a difference, though, when you have a co-author.

Writing Daughters of Arkham was not the first time I had a partner. My entire career writing screenplays was/is/continues to be done with one other person sharing the authorial load, so this wasn’t completely uncharted territory. Every partnership works differently, though, and this is a bit of insight into how this particular one went. Spoiler alert: pretty well.

It started when I got a quick message from a friend, who is also the head honcho at Th3rd World Studios, asking if I wanted a job. The answer to that, incidentally, is yes. Assuming I’m getting paid actual money and not vague promises that it might help my career down the line. Dave Rodriguez had an idea for a book series, but as a comic writer (and a damn good one at that), he had no experience tackling prose. He sent over a quick page and a half of a series bible, which included the seven main characters (all three Thorndikes, the other three main kids, and Mr. Harris), and the basic beginning of the story.

I turned this into one of my patented 16 page outlines. I stalled out once, which can happen, but this time I was able to reap the benefits of having a co-author. I sent the half-finished outline and asked for help. And wouldn’t you know it, but I got the help necessary to get me over the hump. Once the completed outline was approved, I started in on the book itself.

I wrote two drafts of the novel and turned it in to both my co-author and the publisher. If I was writing on spec, it would normally be a fourth (or even fifth or sixth) draft that I submit, and any book goes through at least two more drafts (one content, one line-edit) before publication. In this case, the second draft was where my involvement ended. Granted, my second drafts these days are light years ahead of where they used to be, when they were the first draft that actually made sense as a book. The more detailed outlining is responsible for that. However many drafts were done after turning it in were entirely out of my hands. And you know what? That felt pretty good. While I am far too much of a control freak to give up much on something like the City of Devils books, I could do so for something like this. I’m proud of it, and I think I did good work on it, but it’s not mine in the same way.

I re-read it in advance of the sequel (which is already with Dave, don’t worry), and was surprised and gratified to see just how much of my stuff was in there. Some things were taken out, including at least an entire chapter. The ghosts were substantially reduced, which was probably the right call. I can get a little weird if you let me go. One character, who I used as a simple placeholder, had been expanded to the point that she gains a much bigger role in the sequel. That last part is one of the best parts of teaming up. A second writer might take what was nothing more than a name to you and graft an entire character onto her.

For me, the big favor Daughters of Arkham did was finally give me an excuse to write a female protagonist. The closest I had come thus far was Sophie in Everyman, and while she is the most sympathetic character, she’s also sharing equal time with two male narrators. I’d also played with it a bit in a few of the Coldheart short stories, and a few supplementary City of Devils stories as well, but this was the first time I hung an entire book on a woman. This is a good thing, helping both representation, and (more importantly to me) helping me grow as a writer. I’ve been keeping it up too, so you can expect a lot more ladies to be shouldering the narrative load.

One last note. Eagle-eyed readers will notice a reference to one of my other books in there. I don’t want to say what it is, because no one has caught it yet. I will say, no, this isn’t some elaborate linkage between universes. At best, this is a parallel universe. Don’t overthink it.

And one last point: this is Lovecraft’s Arkham, not Batman’s. A lot of people seem confused about this.

Author, mammal. www.captainsupermarket.com
View all posts by Justin →
This entry was posted in Moment of Excellence, Nerd Alert and tagged Arkham, Daughters of Arkham, Dave Rodriguez, Liner notes, Lovecraft, YA. Bookmark the permalink.