Her hair is the ultimate weapon.

I know what you’re thinking. “Oh no, I haven’t seen Ninja 1 and 2! I’ll be totally lost!” You would be, if the filmmakers had invested in prosaic qualities like continuity, story, or sanity. Ninja III: The Domination is the capstone on the Golan-Globus Ninja Trilogy, which makes perfect sense as long as you don’t know what those last two words mean.

More Accurate Tagline: He’s a hopelessly lost psychopath, she just happened to be nearby.

Guilty Party: If Menahem Golan and Yoram Globus are within spitting distance of a no-budget ‘80s action flick where ninjas go shithouse on unsuspecting cops, it’s their fault. Not that they should totally be blamed for this, because make no mistake, this movie is fucking awesome.

Synopsis: Holy shit. The ninjas have invaded Arizona. It’s probable that movies like this were why, as a wee lad in the ‘80s, I assumed ninjas hailed from a sovereign nation, even more powerful than the USA and USSR. Why? Their entire population were fucking ninjas, that’s why. Ninjastan’s only exports were face kicks and ninja stars.

President Ninjason demonstrates how he wants the economy to climb.

This ninja, who we later learn is called the Black Ninja — despite being neither black nor wearing any black — goes to a cave in Arizona because it’s time to fight the Gorn or something. He opens up a chest made out of rock, gets his ninja costume and some weapons, and heads down to a golf course where he just goes nuts. He’s there to kill one guy, but it ends up like one of those GTA missions were you’re trying to play darts with your cousin, but accidentally tap a cop car and before you know it, you’re standing on top of a tank firing a minigun and screaming something about Kahless the Unforgettable.

The Black Ninja — seriously, the only thing black on him is his Siouxsie eyeliner — gets totally owned by the local constabulary after murder-sprinting his way across half the desert. He runs into Christie (‘80s legend Lucinda Dickey, known for this and the Breakin’ films), this local telephone company worker, and wrestles with her a little bit. Then he keels over.

So Christie suddenly has crazy karate powers, mysterious bruises, and missing time. If this was the ‘90s, she’d immediately think UFO abduction, but it’s the ‘80s, so they’re flummoxed. She’s also got some poltergeist activity in her house, weird lights and a smoke machine in the closet. And oh yeah “someone” is offing the cops who killed the Black Ninja.

Meanwhile, another ninja shows up to visit the local Ninja Monastery in the foothills around this small Arizona town. Look, I don’t know what to tell you. This happens. This new ninja, Yamada, sports an eyepatch with a slit in the middle, that basically looks like a coin slot. He’s the coin-operated ninja. He’s like a parking meter who will cut your throat if you’re five minutes late to your car.

Eventually, Christie figures out she’s possessed, and everyone converges on the monastery for the big fight. Yamada ends up fighting the monks there even though before they were totally cool. In movies like this, if too much karate builds up in your bloodstream, you can hurt yourself by not letting it out. So that’s what’s going on. The Black Ninja goes full zombie, and he and Yamada fight. The good guys win and everyone is happy.

Life-Changing Subtext: Don’t let weird Asian guys inside of you.

Defining Quote: “Only a ninja can kill a ninja.” This is, incidentally, treated as fact in the film. In the ‘80s, we assumed ninjas were supernatural beings somewhere between angels and X-Men in terms of power.

Standout Performance: Sho Kosugi, who plays Yamada, claims to be an expert in ninjutsu. I’m guessing he also says he has a footlong in his pants, and he’s totally kissed tons of girls, but you just don’t know them. Whatever his bona fides are, he does know how to zip though an ‘80s fight scene pretty well.

What’s Wrong: Absolutely nothing. As long as you accept that ninjas are basically karate-sorcerers.

Flash of Competence: Did you not read that thing about karate-sorcerers? This movie rules.

Best Scenes: The opening, when the Black Ninja goes nuts on the golf course has to be seen to be believed. First, he’s just going berserk on a golfer (later obliquely referred to as a “leading scientist,” so maybe he was involved in ninja testing and the Black Ninja is part of People for the Ethical Treatment of Ninjas?), then the guy’s security, then the cops. The delirious sense of escalation makes you want it to never end. Had this been 90 minutes of a small man in pajamas beating the absolute fuck out of a bunch of overweight desert cops, it would have swept the Oscars.

In addition to working for the telephone company, Christie has the most ‘80s of all jobs. No, not freebasing hair spray for your collection of Lamborghinis. She’s an aerobics instructor. Secord stalks her here, and then she goes to the alley outside where a group of guys from the gym (we saw them there earlier), are cornering a woman, presumably to gang rape her. They’re like 20 feet from the exit, and based on the traffic, this is where everyone goes, and these guys are not being discreet at all. This really comes off as something that they sort of do after every aerobics class. Christie isn’t having this, and with a gigantic audience, tells the guys to stop, then uses her newfound ninja karate on them. Secord watches, then pulls Christie away, telling her she could be arrested for what she did. I don’t think Secord really understands the law very well. Or women. Or breathing.

Periodically, Christie wakes in the middle of the night to check her closet. Oh yeah, Christie lives in the Platonic ideal of the ‘80s pad. She has an old-school arcade cabinet, creepy clown masks on the walls, a Nagel print, superfluous neon, workout equipment, and everything is day-glo, like Bing Bong had his way with it. So anyway, she gets up, and her closet is made of lights, smoke, and lycra. The ninja sword then needs to float out and circle her like the new moon of planet Badass. This whole thing could easily have been scored by a-Ha.

Transcendent Moment: So remember that whole thing about how there’s suddenly sex? Yeah, she lets Secord take her home after she stopped the rape and he whined about how he was entitled to her treating him well. He was sick of anti-cop bias. Yes, this is a thing that happened.

So she takes him home for sex. But even the physical act of love must be turned into a moment of unremitting horror as she gets a can of V8 — you know, the stuff that’s basically cold tomato soup and exclusively consumed by people who hate themselves — and pours it on her neck, where it pours down her body like blood. It’s like she’s trying to confuse an Italian vampire. Based on Ninja III: The Domination’s understanding of ninjas, romance, and now sex, I can say with absolute certainty, this thing was written by a 10 year old. 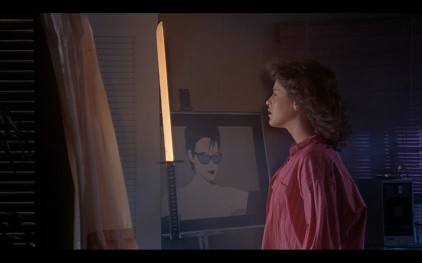 Ninja III: The Domination is fantastic. It’s rare you get an authentic time capsule for raw, uncut ‘80s madness, but this is it.