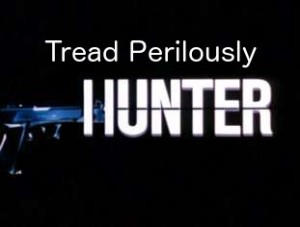 Tread Perilously makes a trip to 1980s Los Angeles as Erik finally subjects Justin to an episode of the once-popular 80s cop show Hunter. When Hunter and McCall’s Huggie Bearish informant Sporty James witnesses a murder, the detectives try to get him to testify against Columbian drug cartel enforcer Bogota while Sporty sees an opportunity to score a cool million from the cartel.

You can see the flaw in his plan.

Justin and Erik discuss the strange format of 80s cop shows, star Fred Dryer‘s failure to do much of anything, the show’s similarities to the third Dirty Harry film, The Enforcer and the grimy streets of Los Angeles in the mid-80s. They also spot the real LAPD detectives smuggled into the episode and familiar faces buried in the episode. Garrett Morris‘s strengths as an actor are also called into question.

Erik Amaya is the host of Tread Perilously and the former Head Film/TV writer at Bleeding Cool. He has also contributed to sites like CBR, Comics Alliance and Fanbase Press. He is also the voice of Puppet Tommy on "The Room Responds."
View all posts by Erik →
This entry was posted in Transmissions, Tread Perilously and tagged fred dryer, garrett morris, hunter, podcast, the enforcer, Tread Perilously. Bookmark the permalink.