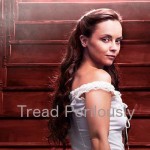 Tread Perilously returns to the beginning to celebrate its one year anniversary! A year ago, the show began as “An Axe to Grind” as Erik and Justin decided to do a podcast centered around Lifetime‘s limited series The Lizzie Borden Chronicles. They continued on to Doctor Who, Attack on Titan and a number of other series, but never returned to the TV movie from which the whole thing began: Lizzie Borden Took an Ax.

Lizzie begins her murder spree with her father and step-mother, but the baffled police of Fall River, Massachusetts cannot connect the dots without the help of Payback’s Gregg Henry. Can The 4400‘s Billy Campbell get her acquitted on a Miranda technicality which will not exist for at least another fifty years?

Erik and Justin recount their fascination with the series and the early steps to its madness in the TV movie. They also consider the difficulties of the courtroom drama, the missing Lizzie Borden Chronicles characters and Lifetime’s intended audience. Erik also tries to figure out his beef with The 4400‘s Billy Campbell.

Erik Amaya is the host of Tread Perilously and the former Head Film/TV writer at Bleeding Cool. He has also contributed to sites like CBR, Comics Alliance and Fanbase Press. He is also the voice of Puppet Tommy on "The Room Responds."
View all posts by Erik →
This entry was posted in Transmissions, Tread Perilously and tagged billy campbell, Lizzie Borden Took an Ax, podcast, Tread Perilously. Bookmark the permalink.