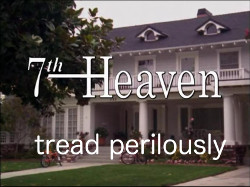 Tread Perilously returns to Glen Oak, CA this week with another episode of 7th Heaven. In fact, it was Erik’s first episode of the series when it aired in 1998; which he is all-too gleeful to mention. While Reverend Camden tries to help a woman who lost her son in an accident and a pregnant teen, Lucy, Simon and Ruthie decide to take the school bus. Matt’s car if briefly stolen and menace is personified by mute Hispanic kids.

For Erik, it’s an opportunity to explain his fascination with the series and its Jack Webb-esque world view. For Justin, it is a nostalgic trip to his Jr. High alma mater. And though he tries to wrap his head around the show, Justin continues to recoil in terror as the saccharine gets dumped in by the bagful.

Erik Amaya is the host of Tread Perilously and the former Head Film/TV writer at Bleeding Cool. He has also contributed to sites like CBR, Comics Alliance and Fanbase Press. He is also the voice of Puppet Tommy on "The Room Responds."
View all posts by Erik →
This entry was posted in Transmissions, Tread Perilously and tagged 7th heaven, podcast, Tread Perilously. Bookmark the permalink.