Even the poster has no idea what’s going on.

No one was ready for Dreamcatcher. This was supposed to be it, finally. The acknowledged master of mass-culture horror teams up with the man behind some of the greatest movies ever made, assembles an interesting cast of not-quite-stars, and gets the kind of budget to make anything happen. “Anything” as it turns out, did in fact happen. In the butt. In all the butts.

Guilty Party: Director and co-writer Lawrence Kasdan. Most of Kasdan’s flops and failures have been overshadowed by his good work, but the man is not immune to crap. No pun intended. Well, kind of. Look, if he’s going to make an entire movie based around nothing but poop jokes gone horrifyingly awry, I can’t be expected to exercise more self-control.

Synopsis: Four middle aged friends are psychics now, because writing convincing motivations for your characters to do things is hard. There’s Henry, a suicidal therapist (Thomas Jane), Jonesy, a college professor (Damian Lewis), Pete, a used car dealer with the incredible ability to find things (Timothy Olyphant), and Beaver, a shabby trainwreck of a man with an undeniable oral fixation.

Jonesy gets a vision of the mysterious “Duddits” to cross a street, and then gets totally creamed by a CGI car. Some period of time later, the four men congregate at a cabin in the snowy woods of Maine (I mean, probably), where they bond while reciting the kind of dialogue a freshly-crashed alien might write if all he knew of human culture was the career of Adam Carolla. Interspersed with all of this are flashbacks to their childhood in the ‘80s, where it’s revealed that Duddits is a severely mentally challenged kid from their hometown of Derry, Maine that they rescued from bullies. In gratitude, he gave them superpowers. Like you do.

A hunter shows up at the cabin one day, claiming to have been lost in the woods, and he has really bad gas and a rash on his face. They put him to bed, but wouldn’t you know it, he tracks blood all over the house, leading right to the bathroom. They have a conversation with the hunter, then break down the door, finding that he’s keeled over both mid-sentence and mid-poop. And there’s blood, like everywhere. I can only assume he had been breakdancing in the middle of the bathroom, spraying gore from his anus like a ruptured Detroit water main.

Oh yeah, and a carnivorous worm comes out of his butt and kills Beaver. RIP, Beav. Then the creature’s dad shows up, who basically looks like a giant, waddling penis with eyes, and goes into Jonesy’s head. And now it’s British. Sure, movie, why not.

Meanwhile Pete gets killed by another one of these worms out in the woods. Two different characters come up with the nickname “shit weasels” independently, probably because no one knows what the fuck a weasel looks like. These things literally could not be less weasel like if they tried. Still, it gets one of the great points of horror: give your monster a ridiculous name. It’s why the creature in Alien is still known as the Vagina-Face Dong-Head. 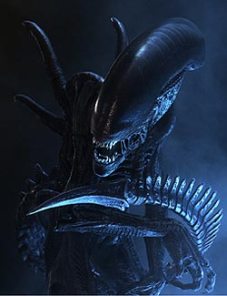 The military shows up, led by Colonel Curtis (Morgan Freeman), and Owen (Tom Sizemore). They’re going to quarantine everyone and kill them to keep the infection from spreading. Henry, now captured by the military, convinces Owen to get him out to stop Jonesy, who is going to poison the reservoir. Imagine a Bond movie written by a kid who just learned all the verses to that song “Diarrhea,” and you see what you’re dealing with.

Henry convinces Owen to swing by Derry and pick up Duddits (Donnie Wahlberg), who is now dying of leukemia. Henry also realizes that Duddits has been warning them about this since they were kids, but no one could understand him because of his speech impediment. It’s as silly as it sounds. Then they head over to the reservoir. Owen and Curtis get into a fight, and despite Owen having a gun and Curtis having a helicopter, it’s a tie, and they both die.

The monster, calling itself “Mr. Gray” jumps out of Jonesy and fights Duddits, who turns into another kind of monster. They explode together and the movie abruptly ends so we don’t think too much about what happened.

Life-Changing Subtext: The kids in the special class are actually just waiting for an excuse to turn you into the X-Men.

Defining Quote: Beaver: “I’ve seen a fuckeree turn into a fuckero.” He says this like these are words with meaning, and not something a dyslexic reads on the bathroom wall of a prison.

Standout Performance: In a sane movie, a normal movie, Morgan Freeman plays the good guy and Tom Sizemore plays the bad guy. This is an immutable law of the universe. Yet Dreamcatcher gives us a big old middle finger to that, as though to show it will flout every rule, it perversely casts them in the opposite roles. I think this is why both died, as though the universe was sorting it all out for them.

What’s Wrong: King’s fingerprints are all over this thing. There’s the Maine locales, the magical kid with Down Syndrome, gratuitous psychic powers, and a made up patois for the main characters to speak. It might have worked better on the page. Hell, it probably did. Or, this could be King falling into all his laziest cliches, slapping together some Frankenstein monster out of his other work without realizing that “shit weasel” is not going to have the staying power of, say, Pennywise.

This is a minor point here, but I have no earthly idea of what this monster’s lifecycle is. They’re shown hatching from people — anally — but they’re also shown laying eggs. Then there’s the weird red fungus that grows on everything? I need to stop thinking about this or I’ll start losing IQ points.

Flash of Competence: There’s something to be said for a movie that feels like it’s in a contest with itself to consistently top whatever madness you just saw onscreen. Crazy is many things, but boring isn’t one of them.

Best Scenes: Everything from the moment the hiker gets back to Beaver’s death is gold. For one thing, the guy is burping and farting up a storm, and it’s hilarious. Why? Because people farting is funny. It’s not highbrow humor, but it’s tough to make killer farts scary. Imagine if you took a legitimate horror classic. The Thing, for example. Say the one way to tell if someone was The Thing was if he started floating air biscuits left and right? Try it. Next time you watch a horror movie, add some fart sounds of your own.

Anyway, after the guy shits out the razor lamprey thing into the toilet, Beaver traps it by sitting on the lid. Jonesy runs out to get friction tape to trap the thing in there. In trying to get out, the monster makes Beaver spill his container of toothpicks, which is treated with the same breathless gravity of someone dropping one of the balls of poison in The Rock. Beaver, unable to function without a sliver of wood in his mouth, leans over to get the one toothpick not sitting in blood, and the whole thing is shot and scored like a character desperately reaching for a gun while an amorous komodo dragon drags him into its den.

Transcendent Moment: In the very end, when Duddits waddles in to do battle with Mr. Gray, it looks pretty grim. After all, Duddits is a severely mentally handicapped man frail from late-stage leukemia, and Mr. Gray is a giant penis with a vaginadentata for a face and a tail that looks like what a scorpion would draw on his Trapper Keeper. Duddits gets stabbed and then becomes a different monster. So… was he never a child? We met his mother. Was she an alien too? What about the leukemia? Why pretend to be dying of cancer? Why pretend to be mentally challenged? Was he just trying to make things more difficult? What kind of asshole is he?

Dreamcatcher has gained a justifiable reputation as being a work of delirious insanity that somehow made it through the studio system. Though I was disappointed at the time, hoping for that horror classic that never materialized, in some ways this oddity is even better.