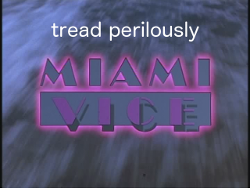 Tread Perilously’s Assignment: Miami continues with “Viking Bikers From Mars,” featuring show favorite Reb Brown as “Reb,” the leader of a biker gang who vows to get revenge for dead drug kingpin “The Wire” and to deliver gold to his sister. Lots of people end up dead or exploded along the way. Crockett plays with his carphone and Tubbs gets shot. Izzy returns again and Reb screams his way to an amazing conclusion.

Erik and Justin discuss their love for Reb Brown, the film Yor: The Hunter from The Future, Trudy’s sensible clothes and how hard it must’ve been for Dick Wolf to take over the show. Also, the Marvel Comics characters Ape-man and Man-ape are invoked.

Also: We still need your suggestions for our upcoming Tread Who Perilously season. Send the titles of your least favorite Doctor Who episodes to treadperilously@gmail.com.

Erik Amaya is the host of Tread Perilously and the former Head Film/TV writer at Bleeding Cool. He has also contributed to sites like CBR, Comics Alliance and Fanbase Press. He is also the voice of Puppet Tommy on "The Room Responds."
View all posts by Erik →
This entry was posted in Transmissions, Tread Perilously and tagged dick wolf, marvel comics, miami vice, podcast, reb brown, Tread Perilously. Bookmark the permalink.