This makes it look a lot better than it is.

I owe Starcrash an apology. Long time readers will know I reviewed the French Star Wars knockoff way back in 2010. I said some mean things. Some pretty unforgivable things. At the time, I was convinced that was the worst incarnation of that universe. That was before I saw Escape from Galaxy 3, which is somehow considered to be the second entry in the Starcrash franchise, despite not sharing a single character from the first.

More Accurate Tagline: In space, no one can hear you moan.

Guilty Party: Director Bitto Albertini, who might have also been writer John Thomas, because that’s a term for penis, and it’s pretty clear that’s where his head was at. Albertini (who is also credited elsewhere as Albert Thomas) is the mastermind behind such movies as Black Emmanuelle, which I can only assume is exactly what it sounds like.

Synopsis: Oraclon, the King of the Night, has a beef with civilization. He shows up in a giant clawed hand spaceship, which (other than an insert shot of a line of smaller fighter vessels) is the only connection to the first movie, to threaten King Ceylon, who lives on a giant space station.

The battle is pretty much hopeless, so Ceylon sends his daughter, Princess Belle Star and Space Captain Lithian (presumably named after the drug that helped him even out a little) to go to the other kings and emperors of the galaxy to unite against Oraclon. The space station blows up.

Belle and Lithian need to make some repairs, so they land on a nearby planet. There are people on it, and they’re all dressed like Greek Zapp Brannigans. They freak out when the bizarrely-dressed Lithian and Belle show up, and decide throwing rocks and waving sticks is the best way to show their displeasure. A few raygun hits dissuade them, and they return to the village elder and are like, “I have no idea what happened! We went out to say hi, and they started with the black magic!”

The Brannigans ambush and capture both Lithian and Belle, who have the survival skills of lemmings in a soccer riot. The Brannigans are going to burn the space people alive, reasoning this is the best time for it, but the ceremony stops when Lithian saves a kid using hitherto unrevealed super-leaping powers.

Yeah, Lithian has superpowers he didn’t bother to reveal until right before the burning. Sound familiar?

But if you think this is getting a little too sane and rational, don’t worry. Albertini got bored with all this and decided, fuck it, let’s make an Emmanuelle movie. Belle’s out bathing in a waterfall when this creep comes up and starts groping her with a flower. It’s like the screenwriter got up to take a leak, and when he was gone, a horny thirteen-year-old took over and typed whatever was in his head. When the screenwriter (whose name, I’d like to remind you, is a synonym for penis) sat back down, he was like, “Well, shit. I don’t want to rewrite all these finished pages. That’d be madness.”

Oraclon returns a couple times and bombs the planet, but he doesn’t find his quarry the first time because they never bothered to actually repair their ship. Eventually, they do, and good thing. The Brannigans turn on them, blaming them for Oraclon being such a douchebag.

Belle and Lithian go into space where they finally have sex. Oraclon creepily watches because he has cameras in their ship or something. I don’t know. It’s weird. Turns out, all this fucking had a purpose. They somehow leveled up.

So they pretend to surrender to Oraclon, but instead Belle just straight up disintegrates him with her vaginal space ray or whatever happened. Albertini has the same understanding of sex as a ’50 B-movie monster. Either that, or his wife has some really creative excuses for why they can’t have sex. “Sorry, honey, my uterus blast is still powering up. I could vaporize your junk!”

Defining Quote: Belle Star: “After thousands of years our sexual powers have come back to life. And we haven’t suffered any harm. On the contrary, we’ve acquired a powerful new dimension.” Thought I was joking about leveling up, huh?

Standout Performance: Don Powell plays the King of the Night, and he’s the only one I believe has even heard of acting before they turned on the cameras. He’s also dressed like a wrestler with low self-esteem, so there’s that too.

“Be honest. Is the bowtie too much?”

Flash of Competence: Belle Star’s costume features starfish covering her left boob and right butt cheek. Those little guys hang on for dear life, so I’m giving it to them.

Best Scenes: Lithian and Belle don’t know what sex is. I can buy that. Maybe they reproduce with cloning chambers or ovipositor robots or whatever. I know the creators didn’t think it through, but I’ll take it. Then Lithian sees a stream, and he’s like, “What’s that?” Belle has to explain water to him as something she saw in her dad’s museum. Ha ha ha, nope. Although maybe extreme, thousand-year dehydration explains why Lithian is such an idiot.

Belle and Lithian discover sex the way Albertini did in his sixties: by hiding in some bushes and spying on a young couple. They’re doing some of that gross early-‘80s kissing too. The kids eventually see the weird space people and escape into the water, presumably because they know that moron Lithian is terrified of it.

So Belle and Lithian return in the very end, apparently having forgotten they had to flee an angry mob. You don’t forget your first angry mob, so I’m going to assume this is normally how these two are asked to leave anywhere. Don’t worry, though, the angry mob has totally forgotten too. Probably because they’re like, “the magical sex genies from space are back! Everyone’s gonna get laid!”

Transcendent Moment: So pretty much as soon as these two discover sex from the creepy locals, it looks like they’ll end up together. Or strung out in the corner of some wood-paneled basement waiting for Chad to come back with the amyl. Belle starts trying to introduce Lithian to sex, and he’s about as confused as you’d expect a thousand year old virgin to be.

Then two ladies and a dude happen by and Belle’s like, “Hey, wanna bang?” She swaps the guy and they start up a little group sex. “Watch us,” she exhorts Lithian, and the whole time he has this nervous smile like, “Why am I going to sneeze out of my penis?” But then Oraclon shows up, probably because the screenwriter just caught the thirteen year old kid at the typewriter and was like, “Seriously? No one is buying this.” 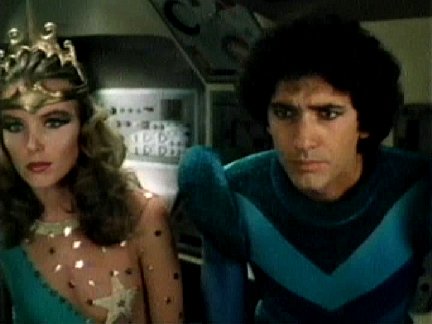 “They want us to wear what?”

If this is a sequel to Starcrash, I can only assume Belle Star is the descendant of Stella Star from the first one. And that those hand-ships are prefab and sold from spaceship Ikea. Or, possibly, that no one cared about the rich mythology of the Starcrash universe.

1 Response to Yakmala: Escape from Galaxy 3