Texas is a flat circle.

What is the role of the Almighty in fiction? It’s an ongoing debate, and there’s no correct answer. Humans tend to have widely diverging belief systems, even amongst those who are supposedly practicing the same faith. The existence of the supernatural in anyone’s fiction is going to default to the beliefs of the author. An atheist writer will assume no divine presence unless the story specifically calls for it, while a theist will assume some flavor of the godhead conforming to their conception of it. Most often, this presence or non-presence doesn’t really matter at all. God exists in the world of Pride and Prejudice, but it never comes up. There is no god in the Foundation series, and no one cares. Sometimes, though, God steps down and gets involved.

Some of the greatest fiction of the late 20th Century includes events specifically described by the characters (and not contradicted in the subtext) as divine miracles. Raiders of the Lost Ark culminates in a scene of literal wrath of God, cleaning up all the troublesome Nazis, but sparing Indy and Marion because they remembered they have eyelids. Pulp Fiction has a lesser event, but as Jules points out, it’s not about the size of the miracle. God saved both Jules and Vincent, and because Jules listened, he walked away and lived (and left Vincent unguarded, allowing Butch to kill him, but still).

The overuse of the divine to wrap up problems even has a name: deus ex machina. Meaning “god from the machine,” this dates back to early forms of drama when an actor portraying god, helped by a literal machine (I’ve always pictured them a bit like cherrypickers with fake clouds glued to them), comes down from the rafters and sorts out the trouble in the play. “You marry him, you marry him, and you go to hell to hang out with Hitler, Jared from Subway, and the guy who invented autotune.” The idea is that this cheapens the drama. Who cares about anything if God sorts it out in the end just like He wanted? What’s the purpose of the struggle at all?

And yes, this flies in the face of conventional theology too: where’s the free will we’re always hearing so much about? Characters don’t technically have free will, sure, but they also don’t really murder each other. It’s called suspension of disbelief.

When is deus ex machina okay? There is no real answer. What bothers some people doesn’t matter to others. It might have something to do with the viewer’s own beliefs — a theist might be more inclined to accept the involvement of the Almighty — but I’ve never done anything even approaching a scientific study. So who knows? I know that I am one of those who hates the form with a burning passion, to the point that the end of Raiders, a movie I love, never sat quite right with me.

That’s not to say any presence of God instantly derails my enjoyment of a movie at all. This week’s flick, Frailty, implies the existence of a fascinating and terrifying God, and it does it through the lens of a sleepy Southern Gothic gem of a horror flick, directed by none other than the great character actor Bill Paxton. Yes, that Bill Paxton. 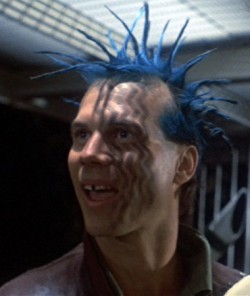 It stars Paxton as the unnamed “Dad,” who awakens one night after having had a vision. An angel came down from heaven and informed him that it’s his duty to go out and kill demons disguised as people. He’ll get three magic weapons, which turn out to be a lead pipe, a double-headed axe, and a pair of work gloves, and a list of people who are secretly demons. God basically showed up and declared him an honorary Winchester brother.

In the afterglow of his religious ecstasy, he wakes him his two boys, Fenton (Matt O’Leary, most famous as Brain in the excellent noir Brick) and Adam (Jeremy Sumpter, the asshole quarterback in Friday Night Lights). Fenton sees his father as dangerously insane, while Adam accepts what’s going on with the chilling peace of the dutiful son. Dad begins taking demons — who are totally people — and when he touches them without the gloves, he can see their sins. They’re murderers and pedophiles all, and he kills them with the axe, chopping them up and burying them in the city rose garden next door. Later on, law enforcement gets a note from the God’s Hand serial killer.

The entire thing is told in flashback when adult Fenton (Matthew McConaughey on a dry run with the character who would become Rust Cohle), lays the entire story at the feet of FBI agent Wesley Doyle (Powers Boothe). It’s probably not much of a surprise that this is setting up for a stunning third act twist, a twist McConaughey expertly foreshadows with extremely subtle acting choices. He reins in his formidable movie star charisma to portray a man entirely shattered by a childhood spent raised by a madman.

How insane is Dad really? Through the bulk of the film, as we see him through the eyes of skeptical Fenton, we are led to believe that he is a serial killer and nothing more. Periodically, he insists they will have supernatural aid. Taking one victim from a parking lot in broad daylight, Fenton asks how they won’t be caught. “God will blind them,” Dad says about the people all around. There’s no accompanying physical manifestation, but sure enough, they get the “demon” back to their slaughterhouse without any trouble.

Dad’s devotion, or psychosis, gets its sternest test when Fenton goes to the sheriff. Dad ends up murdering the man, and he’s visibly distraught. It’s the first person he’s ever killed, after all. The others were all demons. He tearfully lays the death at Fenton’s feet, as the price for not trusting him.

By the end of the movie, it’s pretty obvious that the God of Dad’s fantasies is quite real, and thus the vision was as well. The war in heaven has arrived, and people like Dad are the ones fighting it. The serial killers have become our heroes. Or, perhaps, it was never God at all. The devil is the great deceiver. While the ultimate source remains murky, the presence of the divine — which sets up rather than solves the twist — enhances a story that was already plenty great without it.

2 Responses to Now Fear This: Frailty