Now Fear This: The Hitcher 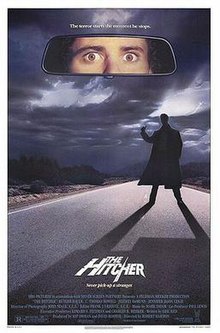 The desert, by definition, is a place of extremes. Of environmental extremes most obviously, as its a place where life has taken root despite lacking the one thing all life on Earth is based on. Of light and darkness, and heat and cold. In the daytime, the sun is as vengeful as an old god. At night, the sky turns cold, black, and then bright with stars, practically begging for the creation of religion. Of wealth and poverty, of towns abandoned to the dust, and casinos rising like mirages. And, of peace and violence.

This week’s movie, 1986’s The Hitcher, understands these extremes. Director Robert Harmon shows us the desert, lingering on the puffy clouds in the endless sky more than once. He’s showing us the extremes, the stark beauty, and more than anything, the insignificance of the people in the grimy little play unfolding in this punishing environment. Whatever happens to them, Harmon says, the desert will endure.

The desert is the only known origin of the villain of the film, the titular hitcher, the psychopath traveling under the probably-made up name “John Ryder.” While there is nothing overtly supernatural in the goings-on, there’s a great deal that comes awful close. Ryder is able to sneak into a sheriff’s station, slaughter three cops, and unlock a cell without waking protagonist Jim Halsey. Locks pose absolutely no barrier, nor do armed men; the only impediment to Ryder’s behavior is Ryder himself, and he is as unpredictable as a chimpanzee who got into the meth. He has no past, and through the film desires no future. He can be interpreted as a simple psycho killer, the devil himself, or simply some kind of murderous spirit spat out by the desert one stormy night.

The story opens on that stormy night (the film was inspired by the Doors song “Riders on the Storm”) when Jim picks Ryder up hitching by the side of the road. The exhausted Jim clearly needs something to keep him awake on this lonely stretch of blacktop, and has he pulls over, his first words — the first in the script are — “My mother told me never to do this.” Why? Because fundamentally horror is all about people being punished for breaking rules. Whether we’re talking about high schoolers getting hacked up by a maniac for drinking and fucking or an entire spaceship crew being rape-murdered by a xenomorph for bad quarantine procedures, there’s a sick part of the psyche that needs to know, somehow, that the victims deserved what’s coming.

The ride starts out pretty strange, but it gets violent when Ryder pulls a switchblade on Jim. Ryder is playing with the precise fears of 1986 in this scene. Hitchhiking had already become the exclusive purview of serial killers, and the switchblade had become an atavistic phobia entirely out of proportion to its rather modest size. In addition, he peppers the threats with enough sexual innuendo and rape subtext that it later creeps out the cops in the third act. It’s not quite gay panic, but it comes uncomfortably close, with Ryder’s actions seeming halfway between a concerned (and deranged) father who wants his protege to grow up, and a spurned boyfriend who just wants to stick something in his smooth young friend.

Ryder spends the rest of the film following Jim. He frames him for several crimes, but always comes to his rescue when the cops come to close. He watches as Jim shacks up with Nash (Jennifer Jason Leigh), a young and helpful waitress, before murdering her in the film’s most famous and still shocking scene. What Ryder appears to want more than anything, what he begs Jim to do in nearly every scene, is to kill him. Ryder wants to die, but more to the point, he wants Jim to kill him. It’s like a twisted version of a manhood rite, one Jim does not want to participate in. Yet as Ryder’s torments continue, he burns out the bits of Jim that were young, innocent, and soft. By the end, Jim is a grizzled, traumatized survivor. Ryder wins.

Fundamentally, that is why I like this film. In 1986, one would expect a kid getting revenge on a psychopath to finish on a triumphant score. Here, Jim’s eventual slaying of Ryder is portrayed as a tragedy. The music is soft, eerie, and sad, with Jim’s thousand-yard stare saying he’ll never be happy again. In fact, the movie was originally supposed to end with Jim killing Ryder execution-style, but to avoid an X rating, Harmon had to compromise with the stereotypical “not dead yet” cliche that mars a lot of the movies of that era.

C. Thomas Howell plays Jim as an average guy stuck way in over his head. He’s not the greatest actor, but he does a decent job of modulating the performance. In the beginning, he’s admirably shameless, allowing Jim to whimper, scream, and sob in a way the hyper-masculine ‘80s shouldn’t allow. By the end, he has the dead eyes and vacant look of another desert-spawned killer. The film even broadcasts Jim’s changeover with a costume switch, going from a soft flannel hoodie in the beginning to a harder brown leather bomber jacket after a nearly-literal baptism by fire.

Rutger Hauer is the real gem here. There might never be another actor with the singular ability to elevate a film like he has. This might be an unpopular opinion, but without Hauer, Blade Runner isn’t a classic. He brings the same intense energy and uncomfortable sexuality that he had with Roy Batty to the role of Ryder. Supposedly, Howell was afraid of him on set, and I can’t blame the guy.

I can’t get through this without noting the writer, Eric Red, wrote my favorite vampire movie of all time, Near Dark. While that one has slowly gained a deserving cult (not sure if it’s too famous to qualify for this feature or not), The Hitcher is largely dismissed as a curio of the time. That’s a shame, as while it is not a genre-hopping masterpiece by an Oscar-winning director, it’s a great little film that deserves a rediscovery. Far more admirable is the way both Harmon and Red know what not to show, leaving Ryder’s worst depredations to the imagination.

The film begins and ends with Jim lighting a match, a simple event bookending his ultimate transformation, and cementing fire as an important symbol in the story. The question is, what will he become? Though Ryder has no past, he prominently wears a wedding band to which he never refers. Did another man torment him into this? Or was he the ghost of the desert’s vengeance? Is that what the desert turned Jim into? The only thing for certain is that Jim walks out of the desert a different man than he went in.

2 Responses to Now Fear This: The Hitcher