Now Fear This: Streets of Fire 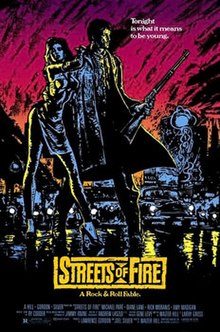 The poster is so ‘80s it can cause spontaneous mullet growth.

As Adam Sandler and Ernest Cline have proven, empty fetishization of ‘80s pop culture is big business. In the rush to embrace this largely imaginary, big-haired, neon-soaked, synth-popped, and pixellated ideal, what tends to be forgotten is one of the defining features of the decade: the ‘80s were fucking weird. That’s one of the reasons the pop culture is as lionized as it is (the other being that those of us who came of age then are getting more of a national audience for our confused rambling). This was in the era of the blockbuster, but before the concept of the blockbuster had become the de facto business model for all of Hollywood.

Since Star Wars invented the concept of money, the bean-counters running the show came to one inescapable conclusion: SF-fantasy was big, and only God and Mammon know why. So men (and it was about 99.99% men, because some shit has not changed) like John Carpenter, James Cameron, Ridley Scott, Richard Donner, Joe Dante, and Walter Hill got to make whatever whale-singing unicorns pranced through the rainbow fairy gardens of their dreams.

Walter Hill has always been fascinated with a grimy, near-noir aesthetic that led him to direct iconic action classics like The Warriors and 48 Hrs, and help write top five horror masterpiece Alien and its top five action masterpiece follow-up Aliens. When Hill built up enough cache to make whatever he wanted, it was not surprising that he chose to set it in a gritty urban dystopia simply labeled (in one of the best opening titles of all time), “Another Time, Another Place…” What was surprising was that it was a musical.

Well, not precisely a musical. Streets of Fire is billed (in its first opening title, because why not, have two, it’s the ‘80s) as “A Rock & Roll Fable.” The movie is bookended with bravura concert performances by fictional band Ellen Aim and the Attackers, and features two full songs right in the middle of what should be the second big action sequences by American Music pioneers and all around badasses The Blasters. There’s a few other songs in there, and each one is more or less at home in the setting, usually illuminating a theme going on. For example, “One Bad Stud” plays right before the first confrontation between hero and villain, while “I Can Dream About You” plays over the final farewell between hero and damsel. There’s no scene where everyone stops dead for a giant song and dance routine and a singalong about what’s really going on in hero Tom Cody’s (Michael Paré, in the film’s largest misstep) unexpressive head.

Streets of Fire is ostensibly an action movie, and in some ways a purer expression of the urban decay on display in The Warriors. While that movie was explicitly set in New York, albeit implied to be a New York of the near future, Streets of Fire is set in a nameless city that seems to go on forever. Seriously, it’s stated several times that it takes the characters hours to go from one end to the other, and the journey from industrial hellhole The Battery to slightly-less-hellish-residential district The Richmond that comprises the second act, takes a full night.

That first concert performance gets interrupted when villain Raven Shaddock (Willem Dafoe being even more awesome than usual) abducts singer Ellen Aim (Diane Lane). In the first great shot of the film (there are several), while the crowd is going berserk over the Attackers’ rollicking ode to the lives of everyone present “Nowhere Fast,” Raven and his leather-clad motorcycle enthusiasts The Bombers stride into the concert hall. Alone among the bobbing and clapping crowd the silhouettes of the Bombers, with Dafoe’s brutal pompadour in the lead, are nearly motionless, like predators in the middle of the herd.

Richmond resident Reva sends a telegram to her badass brother Tom to come home and rescue Ellen, who also happens to be his old flame. Tom, teaming up with Ellen’s manager/current boyfriend Billy Fish (Rick Moranis), and tough wheelman McCoy (Amy Madigan) head into the Battery to get Ellen back, then trek all the way back across the endless city, only to deal with a now revenge-obsessed Raven.

This movie has been a vital part of my aesthetic since I saw it — something that happened so long ago, I have no memory of it. I only know that I was convinced Tom’s guns shot fire for a long period of time because everything he shot exploded into bright balls of orange fire, like his bullets are Michael Bay movies. While I certainly did not understand the sometimes uncomfortable line the film walks between parody, homage, action, and musical, the iconic characters and the episodic plot were ideal for those early days of cable when catching a movie from the beginning was about as likely as seeing the Loch Ness Monster in your bathtub.

Streets of Fire still has an outsized influence on me. The phantoms in City of Devils owe their existence largely to this one. The Howlers were a version of the Bombers, and the Disasters was as close as I could get to the Blasters. Cacophony Jones had Dafoe’s pompadour, but his rock star grimace was inspired by Phil Alvin’s. Hell, one of the Disasters is even named Raven. The climactic sledgehammer fight — yeah, there’s a climactic sledgehammer fight in this thing, and if that’s not a reason to see it, we have no reason to speak — was the impetus for the similar guitar fight in my book.

It’s not hard to see why Dafoe especially had such an effect on me. He is bizarrely hypnotic, from his exsanguinated skintone to his penchant for wandering around in hip-waders, to the sickly Kubrick grin he gives when summoning his gang. It’s, quite simply, the perfect role for a great actor, and not a single piece of scenery gets away without Dafoe’s teethmarks deep into them. His sidekick, Greer, is Lee Ving who you know either as Mr. Boddy from Clue or the punk band Fear (or possibly Flashdance, I guess), packs a good bit of menace in his small frame, even when ceding the floor to his boss. He’s also the reason Bill Paxton is the only actor to be killed or assaulted by an alien, a predator, a terminator, and the lead singer of Fear.

Streets of Fire is a weird window into nostalgia. Not just for what it is for someone like me, but a reminder that the ‘80s were all about the ‘50s. The Cold War, family values, big business, these were the focus of men like Reagan, whose entire persona was right out of a children’s show from the ‘50s. Hill concentrates instead on the seething class resentment of those left behind in the boomtime. Perhaps not what would be expected from an almost-musical, but perfectly in keeping with Hill’s oeuvre.

Streets of Fire is not a particularly important film in the scheme of things. It was intended to be the kick-off of a series, implied when Tom and McCoy pile into their stolen car and speed off for more adventures, but it flopped and killed any chance for a sequel. I own an Ellen Aim and the Attackers t-shirt. And, putting aside that this is an awesome name for a band, every time I wear it, someone approaches me to geek out. This has happened at a Tiger Army concert (the Blasters opened for them), an accent acting class for a radio drama, and most recently, at the San Diego zoo (by one of the keepers, no less). So while it might be little more than a blip on the pop culture radar, there are those of us who love this strange little orphan of a movie.

3 Responses to Now Fear This: Streets of Fire