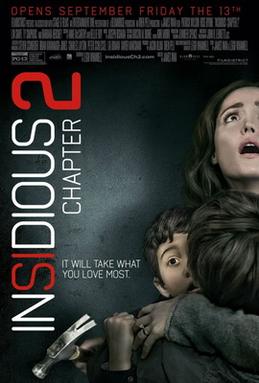 Even by my own nebulous and frequently-violated rules for this particular feature, Insidious was a weird choice. I can’t properly justify it, beyond the fact that I really enjoyed the film, especially as a departure from a pair of creators known chiefly for helping to bring torture-porn into the mainstream. I had a vague idea it might have been unpopular — an idea that I have been thoroughly disabused of — because of the writer/director team, and the fact that I am about as plugged into what is popular as the average octogenarian cave dweller. I have a similar belief about the sequel, Insidious Chapter 2, but then again, there’s been a Chapter 3 too.

Still, while most people praise the first installment, there are plenty who dislike the second. This is not too surprising, since it is the lesser movie. Yet there is plenty to recommend it, especially for genre fans willing to follow the flights of fancy of creators James Wan and Leigh Whannell. After all, this is the movie with time traveling ghosts.

Don’t worry. We’ll get there.

The film picks up right after the end of the first one — and seriously, if you’re reading this and haven’t seen the first one, stop right now and rectify that — with the aftermath of Josh (Patrick Wilson) and Dalton Lambert’s escape from the weird realm of The Further.  As it turned out, Josh did not return to his body. It was the spirit of the weird old woman, a ghost what haunted him from childhood, a murderous entity whose first action upon her return to life was to kill helpful psychic Elise (Lin Shaye). As the Lamberts try to return to a sense of normalcy, Josh steadily deteriorates both physically and mentally from the pressures of playing skinsuit to a serial killing ghost. Wife Renai (Rose Byrne) and mom Lorraine (Barbara Hershey), call in both Specs and Tucker from the previous film, as well as a new psychic (and old friend of Lorraine and Elise’s) to help.

The fun part about this installment is how different it is from the first, yet logically a part of the same universe. The old woman, initially a creepy presence in the first, a detail to fill out both Josh’s backstory and set up the twist ending, gets her whole biography laid out. As it turns out, “she” is a misnomer. She’s actually a male serial killer in the Norman Bates mold, complete with overbearing mother. This killer, Parker Crane a.k.a. The Black Bride, carved a swath of death through Los Angeles until he attempted to curb his urges with self-castration. This landed him in the hospital, where he died under the care of young Lorraine and led to his first meeting (and implied obsession) with Josh.

In addition, the hauntings have not stopped. Renai is dogged by snatches of familiar piano music, and her daughter’s toys move around of their own accord. In a welcome twist, these turn out to be from Josh’s spirit, trapped in the Further, trying to warn his wife of danger. Ghost hauntings can be frightening and uncanny, so it’s refreshing to see them framed as genuine concern and a heroic effort on behalf of loved ones. Poor Renai is too traumatized to get it until too late.

Hey, girl. Just looking out for you.

The time traveling stuff is the most common complaint, and I can’t say issues with it are wrong. Generally speaking, you’re allowed one weird thing in a movie. If your film has ghosts, it can’t also have werewolves, unless it has every other monster ever. So ghosts are fine. Ghosts plus demons are iffy, but since in the popular imagination they’re sort of kissing cousins, you’re getting a pass. Time traveling ghosts? No thank you.

Basically, the beginning flashes back to the night Elise first meets Lorraine and Josh. As a side note, young Lorraine is played by Jocelin Donahue, who remains my favorite modern ‘80s actress. Anyway, this night includes a few weird aspects of a haunting that can generally be chalked up to “ghosts are scary.” Later, as Josh and Dalton (having heroically returned to rescue his father) try to escape, they run into both this, and the events of the first film. What we find out was that some of the scary events were caused not by the various ghosts trying to get into Dalton’s empty skin, but Josh attempting to communicate with the other side across both time and space.

While part of me rebels whenever a filmmaker feels the need to explain a delightfully bizarre scene, another part enjoys this conception of purgatory. This is a place existing beyond death, so who’s to say it conforms with linear time? In fact, wouldn’t it be more frightening and alienating for those within to be able to see themselves alive? It adds a huge dimension for storytelling, and creates the potential for the kind of delicate tragedy horror movies can find so difficult to evoke. While Insidious Chapter 2’s exploration can best be summed up by Elise’s line, “So that’s what that was about,” there is plenty of space for potential sequels. Not that I expect any kind of high-minded consideration of non-linear time in a big-budget horror franchise. I’m just saying it’s there if they want it.

The first Insidious was a haunted house film featuring throwback images from the silent era combined with a postmodern genre savviness. The second dials both back and becomes more of a possession movie. In fact, the third act starts to resemble the finale of The Shining, a movie people seem pretty fond of. While I’m not placing them on the same level, Chapter 2 does grant context to Jack Torrance’s madness.

Insidious Chapter 2 is not as good as the first, and was probably doomed never to be. While this can be disappointing to those who were expecting the same level of innovation, it’s a mistake to dismiss this installment out of hand. There’s plenty interesting going on here and more to the point for we horror fans, it still has a few of the eerie scares so prevalent in the first.