Now Fear This: The Purge: Anarchy 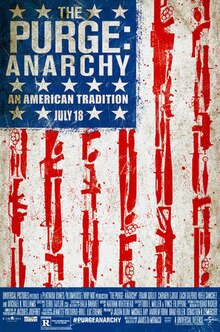 The Inception gang got a little weird.

Perhaps the most frustrating aspect of being an exploitation fan is the squandered premise. Good low budget films tend to be made by people with bountiful imaginations, and this lends itself to high concepts. High concepts that are nigh impossible to service in the constraints of an exploitation budget, so you’re often left with the tried and true plots of home invasions, grimy revenge, and survival horror. As long as the shooting permits are cheap, or the locations grungy enough to be ignored, the movie can be made.

This is what made 2013’s The Purge so frustrating. A high concept and high budget exploitation picture — expensive enough to pay for recognizable faces like Ethan Hawke and Lena Headey — and yet it hit the same beats as your standard home invasion thriller. There was nothing precisely wrong with The Purge, but there was precious little to distinguish it from other movies like it. To make matters worse, with the vastly superior You’re Next in the rearview mirror, The Purge already felt redundant the instant it was released into the wild. Still, it made enough money to justify a sequel. Lucky us, James DeMonaco, writer and director of the first one, heard the criticism and gave us exactly what we wanted.

The premise of the franchise is the kind of gonzo insanity that makes for good high concept exploitation. The United States government has been taken over by a far right wing party called the New Founding Fathers of America. To combat rising crime rates, they set aside one night a year — March 21st to March 22nd — in which all crime is completely legal and called it the Purge. This orgy of violence allows the populace to exorcise its anger, frustration, and rage, and turns us into productive little citizens. Never mind that crime rates are actually falling, and this kind of organized chaos would result in entire cities being burned to the ground; it’s cool enough for at least one film.

If The Purge squandered this premise with a by-the-numbers remake of Assault on Precinct 13, The Purge: Anarchy does the exact opposite. This movie takes as many ways as this idea can be explored and does its level best to hit as many as it possibly can. It lurches deliriously through Mad Max-esque rolling gangs, to slavers rounding up others for profit, to rich people hunting for sport, to mercy-kills for money, to family squabbles turned bad. It felt like DeMonaco made a list of as many films as he could make on the back of this premise and decided that instead of making one, he’d make them all.

DeMonaco uses the lens of three different groups of survivors to tell the story. The first is a young couple (Zach Gilford of Friday Night Lights and Kiele Sanchez from Lost) right about to separate, who have their car sabotaged by a gang of masked men. The second is a mother and daughter (Carmen Egojo and Zoe Soul) who narrowly escape first a neighbor-turned-attempted-rapist and then a team of paramilitary soldiers operating out of a big rig. The last group is one man (Frank Grillo): a laconic badass with an arsenal of guns and a grim attitude. Unlike the others, he is out on the streets by choice, meaning he’s there to purge. Yet he saves them from danger and guides them through the violent streets as best he can, while still holding out hope he can extract revenge from the night.

The original Purge also suffered from a lack of a point of view. It seemed willing to satirize… something, but it never peered past violent youth and the hypocrisy of friendly neighbors. Anarchy now openly wears its intent. It lingers specifically on the wealthy, both their pre-purge ritual of prayer to the New Founding Fathers, and their eagerness to use their wealth to murder without any of the risks the poor must take. It’s a blatant depiction of the rich turning economic predation on the poor into physical predation, and with the ultra-wealthy only getting richer, it is a theme that resonates. Though the movie sees purging as a bad thing, it sees purging from the safety of one’s home or other fortified area to be even worse. If there’s a sin Anarchy can’t forgive, it’s cowardice.

Yet it never confuses bravery with bloodthirst. In a refreshing change from what one might expect, it’s established in dialogue that not enough people are actually killing to create the sort of order the purge is supposed to bring. If given the chance to murder without consequence, Anarchy states (correctly, in my view) that the majority of people would not do so. The big rigs, which prowl the streets with a trailer-full of paramilitary soldiers and a tripod-mounted minigun, are government-sponsored plants, there to keep up quotas by butchering entire apartment complexes. In fact, Anarchy sees mercy as the highest virtue. If Grillo’s character had not chosen mercy over vengeance, he would have died.

The film touches on themes of gender and race as well. The would-be rapist who corners Eva and Cali in their apartment goes on an extended rant in which he states that he feels he is owed them. While the circumstances are different, it’s easy to see those words in the mouth of a more immediate threat. The gang that threatens Gilford and Sanchez is either entirely or predominantly black, the film treading queasily in Death Wish territory, where heroic whites are beset by animalistic minorities. Yet later, all the worst purgers are as white as you get without being transparent. The most heroic scene in the film depicts a team of entirely African American freedom fighters mowing down white people with assault rifles. It doesn’t hurt that the leader is the great Michael K. Williams.

This is the top image if you google “Omar.” As it should be.

When I first saw the movie I joked that it plays like Grillo’s audition tape to be the Punisher. Unfortunately, that role has already been cast, and Grillo has the minor, if pivotal role of Crossbones. Still, it’s nice seeing what could be. While Ray Stevenson will always be my Punisher because of his one excellent outing, Grillo would have been a great choice for the modern Marvel stable.

The Purge: Anarchy is a modern exploitation picture, but it still manages to keep most of the nastiness of earlier generations. Even better, it has a conscience and a point, something that even the best examples of the genre are often sorely lacking.

2 Responses to Now Fear This: The Purge: Anarchy