So, a million years ago, Paul Pope drew an illustration of his THB protagonist, HR Watson, jumping for joy and exclaiming “Yay for Comics!” It is a reminder that the medium is filled with excitement. Yet, it can be difficult to enjoy comics with the sexist and violent tirades of certain fans, the thin margins under which the industry operates and the continuing racial and gender inequality in the creative sector of the business, but there are still things to love about it. Things that make me jump for joy, just like HR Watson.

Has it really been a year (baring the odd month off) since I first shouted Yay for Comics? In the beginning, it was in response to a lot of negative things going in in fan circles, but it strangely brought me much closer to comics than I’d been for nearly ten years. At the same time, that seems to be the cycle; every ten years, things get really exciting in comics, so let’s talk about some of that excitement.

Convergence: The Question #1-2: What’s this? An event title tie-in? It’s true, The Question, by Greg Rucka and artist Cully Hamner, is a tie-in to DC’s current weekly event, CONVERGENCE, but the particulars of that event are meaningless here. The important thing: Rucka and Hamner have been reunited with Renee Montoya, a character that roamed Gotham as a police detective for a decade before taking on the mantle of the Question in DC’s first 52 series. She subsequently appeared in a backup strip in the pages of Detective Comics by Rucka with art from Hamner and it was a breath of fresh air. Besides her mask, Renee uses her fists and her wits in interchangeable order to fight injustice. This Convergence story sees her trying to redeem the soul of Harvey Dent, a man morbidly fascinated with her even as he hopes to die at the hands of another universe’s Harvey Dent (comics!). Along for the ride are the Helena Bertinelli version of the Huntress and Renee’s ex-girlfriend Batwoman. Hamner’s art is energetic, different from the norm and something I would buy monthly if given the option. The story, even with its universe-bending backdrop is firmly focused on Renee, where she’s been since we last saw her and what saving Harvey would really mean for her soul. This character breathes like few others and I hope once Convergence ends, there might some room for her in the DCU to kick ass.

Art from Convergence: The Question #1

Giant Days #1-2: Our one non-fantastical entry this month is the brainchild of writer John Allison with art by Lissa Treiman. The book, a continuation of Allison’s webcomic, centers on three college-aged women at university somewhere in England. Susan is the practical med student who is in no way addicted to nicotine. Esther is vaguely gothy and good at just about everything. Daisy comes off the youngest and most sheltered. While there are some ongoing plotlines, like Susan’s beef with a transfer student named McGraw, the first two issues are largely self-contained and feature college-age foibles, like the cold all three characters get in issue #2. Each face various, and funny, challenges while dealing with their colds. The best is Daisy and her “probably Polish” and not-at-all homeopathic pep pills. She writers a novel with a typewriter she has no memory owning and ends up talking to pigeons about being sick. Treiman’s art is cartoony and full of wonderful expression. The book is set to be six issues, so it remains to be seen how tight the plot will get, but Giant Days is enjoyable just for how it renders small, usual happenings. 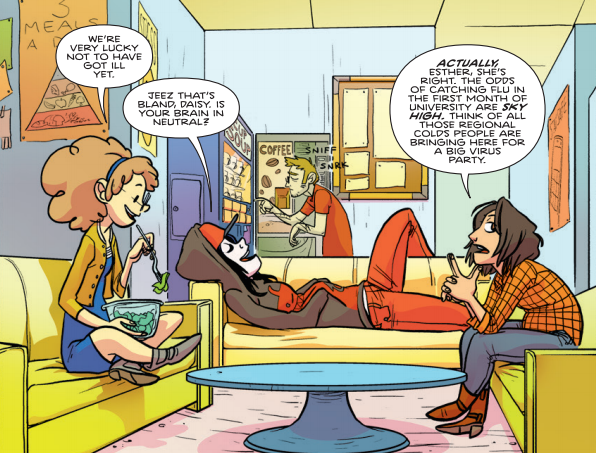 The Unbeatable Squirrel Girl #4: I’m singling this issue out because it does what the best Marvel comics do: unexpected character moments. Here, we finally see the confrontation between Squirrel Girl and Galactus and … it turns out they get along really well. So well, in fact, he trusts her to find another world to devour free of intelligent life. Writer Ryan North and artist Erica Henderson breath poppy, lighthearted fun into the Marvel universe every month with this book and this particular issue really highlights what you can do with the characters when you need to find alternatives to fighting. Though the book started rough, it’s found its feet and has become my favorite of the Marvel comedy titles.

Art from The Unbeatable Squirrel Girl #4

The Multiversity: I’ve kept Grant Morrison’s DC swansong out of the column because, like so much of his work, it needs the whole to be appreciated and this is no different. For the last several months, Morrison and various collaborators have taken us on a tour of the infinite possibilities contained in the DC framework, from the simple core strength of Captain Marvel (no, the other one … no, the other, other one) to the thrill of remixing Superman into a cruel alien raised in the Nazis regime. The main story saw that framework invaded by a grimdark force seeking to rain death and angst upon it all, but the heroes of multiple worlds banded together to fight the infinite crisis. It’s big superhero comics at its absolute loudest and more outlandish, but it reminded me why I liked these crazy ideas in the first place. Superhero comics can be a source of mad energy and when executed correctly, it looks just like The Multiversity.

Art from The Multiversity Guidebook

Star Wars: Princess Leia #1-3: In my Star Wars piece last week, I mentioned my difficulty reconnecting with Star Wars, but this minisieres — written by Mark Waid with art from Terry and Rachel Dodson and colors by Jordie Bellaire — brings me back to that far away galaxy in a way the other recent Marvel Star Wars titles do not. Set immediately after the award ceremony at the end of the original Star Wars, Leia and a fellow survivor of Alderaan go in search of other survivors scattered across the galaxy in hope of preserving the lost planet’s culture — a thing we’re told was one of Alderaan’s most treasured commodities. The Empire is out to get her, and any other survivors, so the race is on while treachery lies in the shadows and even a few of the survivors themselves aren’t so thrilled to be rescued. Though the Dodsons’ art is not as polished as their usual work, I think it serves the story quite well. And Waid just know how to breath life into characters. Leia is immediately recognizable and Evaan, her Brienne of Tarth-esque sidekick, is snappy and fun to read.

And that’ll do it for May. I’m unsure where this journey will take me into the second year, but DC promises to release some interesting titles. Marvel continues to make their characters more accessible and the indie creators all give me plenty of reasons to continue shouting Yay for Comics!