Oh, yes, there is one more Best of Yakmala inductee for the year. This is the film that almost always gets away … except someone in the group will say a line or invoke Maggie and we all remember. The stickiness in our consciousness made it inevitable that Invisible Child would join the table of champions.

Just not the year we saw it.

From the moment Justin heard about the film via the We Hate Movies podcast (a great source of bad movie options, but not all of them fit the criteria for Yakmala selection), he talked it up as a great discovery. I listened to the episode and immediately order a copy. The film, a 1999 Lifetime-ish movie starring Rita Wilson as a woman who invents a third child, is a delight. Originally screened during a program that featured the bonkers After Last Season and Best of Yakmala 2014 entry Song of the Blind Girl, the film lost out to the true insanity of Blind Girl, but I expected it to win the day. Instead, it won a place in our memories, getting more than one shoutout during episodes of New Satellite Show. This year, it took a seat at the table of champions based on how it just stuck with us.

A British Person, apparently living out of her car, takes a job caring for the children in the Beeman family: oldest daughter Rebecca — known primarily as “Doc” — younger brother Sam and five-year-old Maggie. There’s one important problem with Maggie that father Tim Beeman (Victor Garber) is forthright about from the get-go; she doesn’t exist. Granted, he doesn’t explain why his wife, Annie (Wilson), suddenly decided to carry on with an imaginary daughter until much, much later. British Person, in dire need of cash and a bed, decides to accommodate Maggie. Doc quickly shows her how difficult it can be to take care of an invisible child when playing on the swings outside. Turns out Maggie was her room the whole time.

Doc is, in many ways, the standout character. Played by Mae Whitman (yes, her.), she is something of a sociopath in training. In learning to cope with her mother’s particular brand of lunacy, Doc is adept at lying to maintain the illusion of Maggie. She goes as far as to eat Maggie’s servings at dinner and engineer a finger paintings by the invisible child when the family goes to Sam’s preschool. The film is accidentally chilling for just how convincing Whitman, and by extension Doc, is with bold-faced untruth.

But since this is a Best of Yakmala selection, you might be wondering how it’s bad if I’m lauding a (then) child actor’s performance. This brings us back to one of the most important principles in Yakmala movie-watching: intent. Invisible Child, with its commercial breaks and late 90s Lifetime production values, intends to be a serious film about an absurdly specific mental illness. I have no idea if make-believe children is a widespread affectation of a particular disorder, but the film seems to think its as ubiquitous as bulimia and Epstein-Barr Syndrome were in made-for-TV movies at the time. The only problem is that Annie’s affliction is never defined. 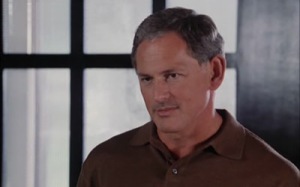 Tim Beeman always has a bit of a murderface.

Roughly an hour into the film, Tim Beeman finally explains to British Person where Maggie came from. One day, Annie came home with infant formula and other baby supplies. She claimed she’d just given birth to a daughter. At first, he thought it was a joke, but maintaining her reality became a second full time job (his primary job is that movieville staple of architect). But even in this bit of expository dialogue — delivered while Tim Beeman makes a pizza — we’re still left with his wife just deciding to invent a child. There’s not even a pop psychology slant to her malady despite the film’s dead serious tone. This primary flaw in the storytelling seriously compromises the film, but its dedication to its hazy raison d’etre makes it endlessly entertaining.

There are also outright amazing moments, like when Rita Wilson makes a woman wait outside an empty bathroom stall because Maggie is using it, and scenes that make you think Tim Beeman is going to cheat on his wife with British Person. I mean, it’s 1999, you got a hot tub, a British au pair and a man seriously starved for some adult affection. These are off-the-shelf pieces that would lead immediately to infidelity in any other film of this ilk. Surprisingly, Invisible Child chooses not to go down this path. Instead, British Person helps the Beemans maintain Annie’s delusion; going so far as to lie to the child-welfare social worker.

Oh, I have to talk about the social worker.

So, in a normal film, Tim Beeman or Annie would be the antagonist, but since they’re not, the film introduces a social worker desperately looking for evidence of abuse because British Person told her about Maggie. Yeah, structure is not the film’s strong suit, so she really doesn’t become important until the last half-hour. Oh, but what a finale. Tim Beeman, Doc and British Person go to the welfare office to sit before a … I guess a tribunal. He somehow manages to keep his wife and Sam out of the proceedings, but the others all explain away Maggie as an imaginary friend Doc passed onto Sam. Oh, but it’s Doc’s most chilling and amazing performance; have a look for yourself:

We all imagine the grown-up Doc has a collection of women in her basement that she’s conditioning to be Maggie.

So after Doc’s tour de force puts the social worker’s job in peril, the family heads home to learn that Maggie is very sick. Everyone spontaneously says their goodbyes to her and Tim Beeman “buries” her in the yard. The film hard-stops at this point still leaving its primary question unanswered. “Why don’t Tim Beeman kill his wife?”

Despite its whopping story problems, Invisible Child is quite enjoyable. It’s competently put together and rolls fast through its 93 minutes. Mae Whitman and Victor Garber are great talents and they do their best with the muddled script. Its problems also lead to the unintended reading of the film as “A Serial Killer Begins,” which adds to the hilarity of watching it in a group setting. Of our many Best of Yakmala selections, it’s probably the most gentle, but still one of the most memorable.

Erik Amaya is the host of Tread Perilously and the former Head Film/TV writer at Bleeding Cool. He has also contributed to sites like CBR, Comics Alliance and Fanbase Press. He is also the voice of Puppet Tommy on "The Room Responds."
View all posts by Erik →
This entry was posted in Projected Pixels and Emulsion, Yakmala! and tagged Best of, her, invisible child, mae whitman, rita wilson, Tim Beeman, victor garber, Yakmala!. Bookmark the permalink.