Going into the 2014 season of Yakmala, I didn’t expect it to be the single most important theme of the year, and yet, here we are. Of this year’s selections for our table of champions, none exemplify tonal whiplash quite as much as this week’s film, the seemingly bit of teen fluff known as Tuff Turf. Starring The Blacklist‘s James Spader and Hollywood Legend Robert Downey Jr., the film undergoes a shocking metamorphosis halfway through that vaulted it past films like Flashdance and Battle of the Year for Best of status. But, I might be getting ahead of myself.

The Blacklist‘s James Spader stars as Morgan Hiller, a troubled teen whose family moves across the country to the San Fernando Valley. I think his trouble is that he can’t yet control his Spadervision or found the ruby-quartz glasses that prevent the unsuspecting from becoming his victims. 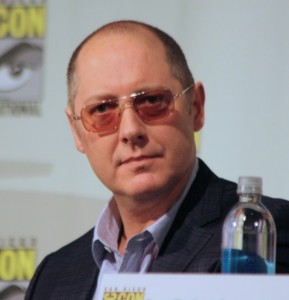 Spadervision effectiveness is cut to 10% when he wears them.

Before his first day of school, however, Morgan gets on his bike and rides the night in search of trouble to stop. He finds it in the form of the Tuffs, a local gang that harasses late night businessmen waiting for the bus. Okay, geography lesson! While the film is meant to take place in the Valley — 20 miles northwest of downtown Los Angeles — a lot of it was shot on my home turf, the Highland Park area of Los Angeles (a mere five miles northeast). In the 80s, it was legit tough … but the movie refuses to acknowledge this, so I’m going to assume that the bulk of the story takes place in Reseda, the second worst place on Earth. You might remember it as the town Daniel Larruso moves to in The Karate Kid.

Sadly, Morgan has no Myagi to train him in his Spadervision, so the next day, Tuff leader Nick sees him on the bike and immediately swoons. Or, at least, he starts to rub his unclothed chest every time Morgan loops around the school entrance. When the other Tuffs notice and identify him as the guy who stopped them the night before, they plot to make Morgan pay. Oh, also, Nick’s girlfriend Frankie gets a blast of Spadervision, but tries heroically to ignore it.

In a history class, Morgan meets Robert Downey Jr. I’m sure the character has a name, but who cares? I would like to point out, though, that RDJ is not yet Tony Stark and there is an appreciable difference. For one: Downey was subsisting on cocaine at the time and it shows in every shot of Tuff Turf. During the Best of screening, we invented the Downey scale to indicate how coked up he might be during any given shot. On a scale of 1-10, the record moment was a 15 during a scene where he playfully tries to run down Morgan in Nick’s car.

But back to day one: The Tuffs run over Morgan’s bike and he goes home to fix it. His parents freak out because it might be “happening again.” Since the film never really states what happened back East, I’m assuming he had an explosive Spadervision episode that caused a building his realtor father was selling to collapse. Oh, but keep dad in mind for later. It might explain the Spadervision …

An indeterminate time later, Morgan steals a car and drives it over to an abandoned warehouse/performance venue where RDJ is playing with (the) Jim Caroll. While there, a musical number breaks out and Morgan uses the synchronized dancing to woo Frankie and dance with Nick when he becomes aware of what’s happening. Honestly, I think he was jealous that Morgan didn’t try to dance with him first.

But since the other Tuffs see this and feel they must reaffirm heteronormative roles, they sucker punch Morgan outside the warehouse. They also steal his car, which, if you’ll remember, was stolen. The Tuffs end up in jail for their troubles and RDJ steals Nick’s car. 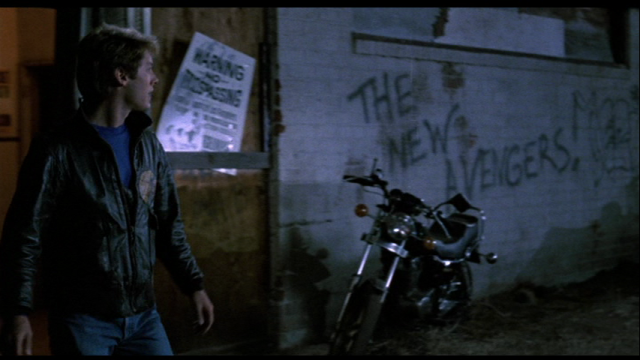 Also: This oddly prescient tag is scrawled outside the performance space.

When Frankie and her friend Ronnie see Nick’s car pull up at the local Jim’s Drive In, they rush in and are surprised by Morgan and RDJ. Ronnie has the hots for RDJ (I mean, who wouldn’t, even when he’s coked to the gills?), so she readily climbs into the backseat to mack with 110 pounds of freshly processed Bolivia’s Best. Frankie is less sure of the situation, but succumbs to Morgan’s 100 Watt Spadervision gaze.

Morgan takes this newly formed team to a posh country club where they engage in some slobs-versus-snobs humor worthy of Valley Girl or even Breakin’ 2: Electric Boogaloo. And then, Morgan unleashes one of his most powerful seduction tactics. It is a song so glorious, words cannot describe its power. Well, maybe the words themselves can:

Let’s examine some of the lyrics:

“I hear your eyes” has to be one of the greatest, cheesiest lyrics ever committed to a recording medium. What makes this whole thing work? Spadervision.

Anyway, the four get kicked out. RDJ and Ronnie vanish — though, I’m assuming RDJ disappeared to get more blow — while Morgan and Frankie head off to Club 60s where she shows off her dancing skills to Jack Mack and the Heart Attack’s “She’s Looking Good” (Sadly, not available on CD, stream, or MP3) and proves she’s pretty much a match for Morgan and his Spadervision.

So it all seems like we’re set for a lighthearted romp as this new group of kids find love and vanquish a cartoony multi-ethnic gang of Tuffs, right?

I think you know where I’m going with this.

Nick gets released from jail and visits Frankie at her home above “The Coldest Beer in Town” liquor store her father apparently owns and operates. Nick and Frankie have sex that, at least on her part, is non-consensual. But not quite done with his confusion and unease, he and the Tuffs also metaphorically rape Morgan at school the next day.

Tell me how else this is supposed to be read?

So from this point on, the movie gets darker as Morgan and Frankie confront the very thin and very vague class distinctions between them and Nick becomes more unhinged. He becomes a serious threat to everyone, apparently paying Frankie’s father a good brideprice for her hand and while joyriding with her and the other Tuffs, he attacks Morgan’s father in his cab on Ave 57 in Highland Park — er, somewhere in Reseda. Remember when RDJ was coking it up in this thing and we were walking the night?

But let’s talk about Morgan’s father for a second. He’s played by Matt Clark, who happens to look like a mixture of Gomez Adams and Harry Dean Stanton. He comes across as someone who earned his way into the comfortable life the family seemingly abandoned back East and is okay with driving a cab while studying for the California realty exam. He’s also more understanding of Morgan’s problems than his mother or brother. Also, when confronted by the Tuffs, Morgan’s dad reveals that he walks the night by another name: Batman. The dude hands the Tuffs their asses without breaking a sweat. It almost feels like tonal whiplash away from the darker film, except Nick produces a gun and shoots Nick’s dad several times.

Man, but even then, the old cuss won’t back down and the Tuffs flee in terror.

This also sort of explains why Morgan behaves the way he does. I imagine whatever happened back East, Morgan’s father backed him up and all hell broke loose. And let’s face it, when your dad is Taxicab Batman, you might grow up feeling a bit empowered.

Morgan arrives at the hospital to see Frankie helped his father get there and the two run off to have sex. I’m not sure if I should deploy J.K. Simmons again, but it surely is a different tempo. So, finally having a sexual experience in which she wasn’t trying to wish it all away, Frankie tells her father that she doesn’t want to marry Nick. Despite whatever dowry he might’ve been promised, he respects her wishes. Nick, however, reacts badly, beats up her old man and kidnaps her to that warehouse from when the film was super-fun-happy times.

Nick lets Morgan know where to find them and he powers down his Spadervision to become Ezio Auditore da Firenze: Master Assassin. He stealths his way into the warehouse, takes out most of the Tuffs and has a final confrontation with Nick.

Oh! But before that, RDJ reappears with two Dobermans! And Frankie gets a hold of Nick’s gun only to see it’s empty in that classic bit of “You won’t shoot me, you’re a girl” that these sorts of movies like to pull.

But when Nick and Morgan have their final confrontation, Nick ends up going over the side of some scaffolding and apparently dies from the fall … but it could’ve been weaponized Spadervision, just like in Less Than Zero. The surviving characters congregate to look at Nick’s apparently dead body as sirens can be faintly heard in the distance. They clearly need counseling after all this and — ah, fuck it, here’s some more Jack Mack and the Heart Attack:

The movie is straight up crazy with its tonal shifts. Nick is such a non-threat in the first half, that his sudden upgrade to psychotic comes as a surprise. I can’t help but think RDJ’s disappearance for the bulk of the film has something to do with it. He just straight up vanishes with no explanation only to be summoned by Morgan in the last ten minutes. That seems a little too convenient, but it lead to one of the great Yakmala finds. In the midst of all the tonal whiplash, we get two amazing Jack Mack and the Heart Attack songs, a pretty good Jim Caroll performance and, of course, “We Walk the Night.” Tuff Turf played for the first time at a Dancemala program with the a fore mentioned Flashdance and Battle of the Year. I fully expected Flashdance to ascend, but this tipped the scale by never really deciding what movie it actually was: light-hearted romp, gritty urban teen drama or fantastic quasi-musical. It is all of those things and none of them, but one thing it definitely is: enjoyable.

Erik Amaya is the host of Tread Perilously and the former Head Film/TV writer at Bleeding Cool. He has also contributed to sites like CBR, Comics Alliance and Fanbase Press. He is also the voice of Puppet Tommy on "The Room Responds."
View all posts by Erik →
This entry was posted in Projected Pixels and Emulsion, Yakmala! and tagged best of yakmala, Jack Mack and the Heart Attack, James Spader, Jim Caroll, Kim Richards, Robert Downey Jr., Tuff Turf, Yakmala!. Bookmark the permalink.