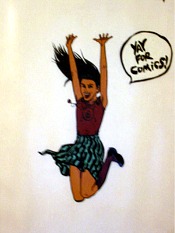 So, a million years ago, Paul Pope drew an illustration of his THB protagonist, HR Watson, jumping for joy and exclaiming “Yay for Comics!” It is a reminder that the medium is filled with excitement. Yet, it can be difficult to enjoy comics with the sexist and violent tirades of certain fans, the thin margins under which the industry operates and the continuing racial and gender inequality in the creative sector of the business, but there are still things to love about it. Things that make me jump for joy, just like HR Watson.

This month, Brian K. Vaughn finally wins me over. I enjoy a horror comic! Superior Spider-Man continues to win my love and more mad scientists join the celebration of comics.

Saga Vol. 1: So I’ve teased this a couple of times, but I’m not a huge fan of Brian K. Vaughn. Going all the way back to his run on Swamp Thing, his books always amounted to the same things: great premises with uninteresting characters. This is the key: I don’t think he’s necessarily a bad writer. It’s just that he’s failed to create a character I want to travel with for hundreds of pages. With Saga, this changes as Marko, Alana, their daughter Hazel (who serves as the narrator), the Will and Prince Robot IV comes to staggering life. This group of characters speak with authentic voices. Despite being very much in love, Marko and Alana squabble and it reads real. The Will, despite being a bounty hunter, is not presented as a total badass, instead coming off tremendously human. And Prince Robot IV appears to unraveling at the seams as no one wants to deal with his obvious PTSD. Did I forget to mention this takes place in a universe with interstellar travel and curious looking aliens? Oh, it’s definitely in that world and artist Fiona Staples creates some utterly breathtaking alien creatures and environments that can be beautiful and grotesque all at once. The premise sees Marko and Alana, soldiers on opposite sides of a prolonged war, fighting to save their child from a universe that wants her dead. Though lots of people call attention to the Star Wars influence on the title, I think it’s picked up the best thing one can take from that behemoth of a series: the energy. It has a special speed and vitality to it that lots of fantasy comics fail to deliver. I have to call this the best comic book Vaughn has been a part of because it’s generated in me one important reaction: I want to read more of it. Strong recommend. 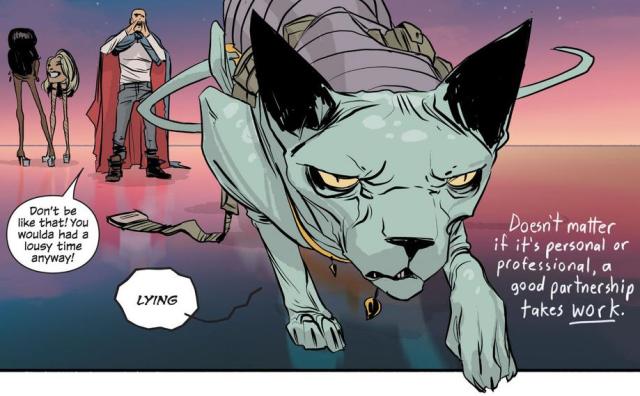 The Superior Spider-Man Vol.2: Every time Superior Spider-Man gets close to becoming a conventional superhero title (hero and villain fighting for pages and pages), writer Dan Slott will twist the dynamic and remind you that Otto Octavius is driving the bus. In this hardcover collection, issues #6-16 of the series, see the good Doctor slipping closer to his old habits as he continues to pursue his quest to protect New York in his own “superior” way. I don’t want to spoil too much as the shocks are what make it great, but I’ll mention some of Ock’s adversaries in this book include the Avengers, Mayor Jameson and the mental ghost of Peter Parker. It has a lot more fighting compared to the first five issues, but those fights make sense in the larger picture of what Ock is trying to accomplish as Spider-Man.

The Manhattan Projects Vols. 1-4: So let’s take noted scientists like Enrico Fermi, J. Robert Oppenheimer, Richard Feynman, and Albert Einstein and reveal them to be psychotic lunatics with aspirations far beyond atomic devastation and you get the fractured tale of Jonathan Hickman and Nick Pitarra’s The Manhattan Projects. I mean, it’s like Hickman knew he had to make a comic book just for me. It’s filled with megalomaniacal asshats who give science a bad name … but it’s positively thrilling! You want them to succeed against small minded jackasses like Harry S. Truman — portrayed in the book as a babbling free mason — and aliens from a far off star system. Hickman’s perverse use of these historical characters is a treat. Instead of a pacifist Einstein, we get a quiet serial killer. When Werner Von Braun is introduced, we find a corpulent cyborg only interested in getting offworld as fast as a possible. Fermi turns out to be an alien programmed to assassinate anyone capable of giving the plant star travel and the only apparent idealist involved is Yuri Gagarin … but he just wants space dog Laika to come home. Pitarra’s art is generally grotesque, but fits so well with the material. Special mention goes to colorist Jordie Bellaire, whose use of color lends itself remarkably well to the occasional chapters devoted to the war raging in Oppenheimer’s head. Yeah, he might be the actual villain of the story, but The Manhattan Projects is built on the fact that there are no real heroes. Yeah, definitely a book for me.

Art from The Manhattan Projects

Nailbiter #1-3: Maybe I’m wrong, but Nailbiter feels like a horror comic, which would make it the first horror comic I actually like. Then again, The Sandman and Hellblazer were meant to be horror comics when they started. So did Swamp Thing, come to think of it. There’s definitely a class of modern horror comics I’m just not into. They tend toward looser art and well defined word bubbles. More gore and shock than a prolonged sense of dread. Nailbiter is not one of those books. Instead, it builds tension as its main characters, a former NSA agent and a small town sheriff, try to unravel the disappearance of a FBI profiler obsessed with the town’s local acquitted serial killer. It also happens the town is known from growing serial killers: a group known collectively as the Buckaroo Butchers. Writer Joshua Williamson gives us a colorful band of characters and a compelling world he reveals just a little bit at a time. The Nailbiter himself is quite charismatic, as a fitting a serial killer. Artist Mike Henderson offers a stylized view of the proceedings, but does so in a very clean manner. Three issues in, I’m hooked into the mystery of Buckaroo, Oregon. Even if Nailbiter isn’t a horror book, it’s one I’ll continue to read.

Silver Surfer #1-3: I wasn’t sure about this one after the first two issues. It comes from Superior Spider-Man writer Dan Slott with art from Mike and Laura Allred. With that art team, the book has a fun and poppy feel to it. It also has plenty of bizarre aliens because Mike Allred. But with the third issue, magic happened when the Silver Surfer final met “the most important person in his life,” a Earthwoman named Dawn Greenwood who doesn’t really need a Silver Surfer — in fact, she offers to rescue him during that first meeting!  Together, they’re magic: 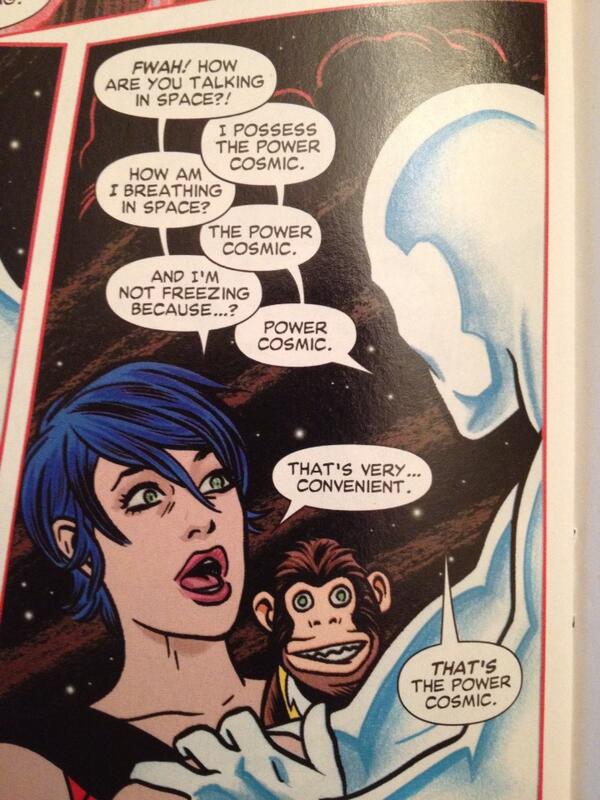 At the same time, the book has an irreverent tone to the rules of the Marvel Universe and its cosmic component. While I like serious books, the wacky nature of this Silver Surfer appeals to me. Now that Dawn and the Surfer have met, I can’t wait to see what further wackiness awaits them.

Velvet Vol. 1: Here’s the loose premise: Ms. Moneypenny turns about to be the agency’s best asset and, having been set up for a fall, goes rogue. It may do the book, from Ed Brubaker and Steve Epting, a bit of a disservice as the actual story is much, much better, but it got you interested, no? Velvet Templeton is a rare action hero. And though the book is set in the spy milieu of the Cold War, Velvet kicks ass. She’s also allowed to have emotions, regrets and anger. This first volume sees the main character escape England to other exotic locals, only to end with her returning to the home counties to visit some payback on whoever set her up. It’s rad. Epting’s art, with assistance from colorist Elizabeth Breitwieser, looks like classic spy novel illustration in every panel and is equal parts moody and glamorous. I know I gave Brubaker some ink last month, but he’s just that good and just that worthwhile to read.

Okay, that’ll wrap it up for this month. Next month, we’ll take another look at All-New Ghost Rider and I’ll talk about a kid’s comic that’s just as great for grown-ups. Also, as I’ll be back from Comic-Con, I’m hoping to discover something new and exciting that gives me more reason to shout “Yay for Comics!”

Erik Amaya is the host of Tread Perilously and the former Head Film/TV writer at Bleeding Cool. He has also contributed to sites like CBR, Comics Alliance and Fanbase Press. He is also the voice of Puppet Tommy on "The Room Responds."
View all posts by Erik →
This entry was posted in Four Color, Nerd Alert and tagged nailbiter, saga, Superior Spider-man, the manhattan projects, yay for comics. Bookmark the permalink.