Not every ninja movie we watch becomes Best of Yakmala, but it’s a damned high ratio. Gymkata and the absolute Yakmala classic Ninja Thunderbolt are previous ninja-themed films added to our Hall of Fame, but not all are fit to be part of the mighty Ninjer Empire growing in our hallowed halls and Miami Connection may be able to explain why.

A nearly-lost relic of the mid 1980s, Miami Connection arose from the ashes in 2011, playing roadshow style to audiences devoted to the “so-bad-it’s-good” mindset care of Austin-based Drafthouse Films. While the film failed to make a splash in its home decade — which, is fair because it’s not the most competent film — it found its place in the hearts of a generation of moviegoers who vaguely recall the ’80s and love cheesy movies.

I may sound like a broken record at this point, but the plot of this film is somewhat hard to describe. Instead, let me list the ingredients that make this Best of selection:

This is a broad survey of the film’s elements, but I’d like to point out one very important fact. Though there are ninja bikers, the initial set of bikers are not ninja. Don’t get confused when you see Yoshito go to a biker bar to talk to Jeff. None of his ninja are with them. Between the other band, the bikers and the ninja, Dragon Sound has a lot on their plate. What made this all happen?

To borrow from Justin, Miami Connection is the product of Insane Foreign Businessman Auteur Y.K. Kim. Though not credited as director, the film is clearly the Athena of his mindcraft. When not playing Mark in the film, Kim is a motivational speaker and Tae Kwon Do grandmaster. He’s very serious about it and seems more or less on the level in his belief that a study of the martial arts will make a person more focused and successful. But, he’s still one of Justin’s IFBAs, and therefore subject to our appraisal as a filmmaker.

In his world, Tae Kwon Do isn’t just beneficial, it’s a damned superpower. Keep in mind that all the members of Dragon Sound do is go to school, eat at their favorite kimchi stand and rock out at the club. They don’t actively fight the drug dealers until confronted, yet somehow keep Yoshito and Jeff from distributing within Orlando’s city limits. And that’s even before the other band comes to Jeff for help! If that’s not wish fulfillment on Y.K. Kim’s part, then we’ve never actually seen wish fulfillment portrayed on screen.

Kim assembled an interesting cast and crew. Yeah, put as many scare-quote around “interesting” as you think might apply. While director Richard Park, who also plays kimchi stand owner Uncle Song in the film, has some film credits in his jacket, co-writer Joseph Diamond, who also appears as Dragon Sound member Jack, had to learn screenwriting from a book over a weekend to help Kim and Park massage the script. Rounding out Dragon Sound are Kim’s students Vincent Hirsch and Maurice Smith as John and Jim respectively. Area musician Angelo Janotti completes the line-up as Tom: the musical genius behind Dragon Sound on and off-screen. Janotti’s then-girlfriend Kathy Collier played Jane, John’s love interest. She also contributes lyrics to the Dragon Sound songs.

Very much a family effort, Miami Connection earns a lot of its affection from this folksy quality that’s apparent on screen. When the club owner throws down with Tae Kwon Do skills of his own, you know he’s a pal of Kim’s in real life. When the band comes home from a long day of schooling and rocking, you know that if it’s not Kim’s home, it’s probably Diamond’s or Janotti’s. Bad movie audiences respond well to that kind of quaint, but honest effort.

Also, by virtue of being the product of a well-intentioned, if ability-lacking, group of do-gooders, the film gets an accidental verisimilitude, offering us a glimpse of central Florida circa 1986. A day trip to Daytona Beach is largely built of the crew pointing their camera out of the car and catching some flabby behinds and unfortunate haircuts. In between moments of the band goofing off, you also see a dune buggy driver getting ticketed and a doom-and-gloom Christian wandering around the pier. None of it is planned, but awesome all the same.

This is also true of Jeff and Yoshito’s trip to the biker bar. Not that I’ve ever been on a ride, but something in the way this sequence was shot tells me this is a 100% real event Kim and his cohorts piggy-backed on. You can smell the sweaty leather and motor oil. I don’t know if bikers were big into meth in 1986, but if they were, it was probably cooking just to the left of camera. It’s authenticity you just cannot stage.

Jeff and some of his bikers.

Since this is the work of an IFBA, the film has several messages. Besides the obvious support of Tae Kwon Do as a live-changing discipline, Kim inserts this message at the end of the film: “Only through the elimination of violence can we achieve peace.” A worthy enough sentiment if not for the BLOOD BATH we just witnessed in the preceding 15 minutes. The final act of Miami Connection is glorious kill-spree that pits Mark and John against all of Yoshito’s ninja. It’s not a good day to be in pajamas as both Mark and John unleash their Wolverine-style beserker rage. Pushed the edge when one of the ninja slashes Jim in the stomach —

Oh, wait, I forgot about Jim! 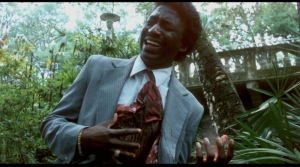 If there’s one aspect to the Insane Foreign Businessman Auteur Theory I’d like to add, it’s a prevalence for a special obliviousness on the part of the filmmaker. In The Room, it’s Tommy Wiseau’s inability to understand how other people talk. In Birdemic, it’s James Nguyen’s complete lack of awareness toward human heterosexual relationships. In After Last Season, it’s Mark Region’s terminal failure to grasp the basic operating tenants of reality itself. And in Miami Connection, it’s Kim’s failure to read Jim:

Now, I’m not saying Jim is definitely a homosexual, but it’s very, very likely and unavoidable to read the character as such in 2014, even if Kim meant for him to be as hetero as the rest of Dragon Sound. I mention this because Jim is at the emotional core of the film. Early on, in a tearful moment, Jim reveals he’s been looking for his estranged father for at least a decade. After Jeff’s death, Jim receives a letter from his father, letting him know he’s coming to Orlando for a reunion. It’s while Jim, Mark, and John are on their way to the airport that they’re attacked by the ninja. The possibility that Jim might die, never reconciling with his father (or, indeed, with his own sexuality) leads Mark and John to go full horror movie on some sorry ninja fools.

The last thing you want to see in the swamps.

So how does that explain why some Ninja flicks don’t pass the test?

Will all Ninja movies that make it to Yakmala need these metrics to be truly excepted into our Ninjer Empire? Only time will tell.

Oh, one last thought, this film was discussed on an episode of New Satellite Show, just like our other Best of inductees. The Show might be a good way to gauge the Yakmala films we love the most.

Erik Amaya is the host of Tread Perilously and the former Head Film/TV writer at Bleeding Cool. He has also contributed to sites like CBR, Comics Alliance and Fanbase Press. He is also the voice of Puppet Tommy on "The Room Responds."
View all posts by Erik →
This entry was posted in Projected Pixels and Emulsion, Yakmala! and tagged best of yakmala, Insane Foreign Businessman Auteur Theory, jim, Miami Connection, oh my god, y.k. kim. Bookmark the permalink.