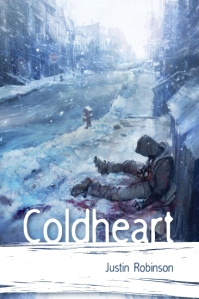 It’s entirely possible you’ve never read a book’s dedication. They just sort of sit there in the front, one of those pages you flip through quickly to get to the sweetest words in the English language: “Chapter One.” So it’s not only forgivable but expected that you ignored the little note at the beginning of Coldheart. Long story short, I dedicated the book to myself, though not me now, but the me of twenty-three years ago. The skinnier version who looked maybe a bit too much like Harry Potter. See, that’s when I had the initial idea to write what eventually became Coldheart, and idea that boiled down very simply to “Godfather but with magic and superheroes.” It was one of several early attempts to write something book-length as I realized something very important: it’s impossible to see boobs in a book. And since my life at this time was entirely devoted to the viewing of boobs, I set the book aside.

Only to pick it up around nine years later, during my senior year of college. I was wrestling with a massive case of senioritis, and forced to face the sad fact that my two degrees that I had just gone into massive debt to acquire were absolutely pointless for anything other than either teaching or sinking into even further debt for an advanced degree and then teaching. The first option did appeal on a vague level, simply because I’m arrogant enough to love the sound of my own voice, but I was left with some uncomfortable realities. In an effort to avoid them for a little longer, I picked up the long-defunct idea and started writing it, throwing out a large part and adapting the rest. I never intended it as more than a mental exercise, but as reality encroached, I was forced to redouble my efforts. I was like a combination of a shark and an ostrich: I had to keep swimming to keep my head under the sand. Or something. Anyway, the project evolved a little bit, but it was still terrible.

I revived it again around 2004, this time as a comic book series. I had started my long flirtation with the indie comics scene, editing books for a variety of smaller companies. I liked writing comics because I didn’t have to decide exactly how everything looked and I could coast on the pure mechanics of plot and dialogue. This was before I came to understand that comics require artists, and artists like to be paid. It’s understandable, considering how much work they (in theory) put in. It’s not uncommon to get an artist interested in doing things on spec, and then have them come to a sudden realization about 10 pages in (and 10 weeks — a page a week is a good rate for them) that this is way more work than they wanted to do. And they drop the project. If you’re really lucky, you might get an email requesting money you don’t have and never agreed to. But usually they just vanish.

Because of these myriad frustrations, all of which will still lead me into invective-filled rants about artists at the slightest provocation, I started working in other media. Prose was the most attractive because of a combination of factors (I only had to depend on myself, and when I finished a project, I had something I could sell as opposed to merely the description of something, as with a comic script or screenplay). I’ve gotten better at what I do — something I used to doubt until I read the beginning of a novel I wrote in 2008 — and decided that I should resurrect this old project as prose. I wanted to do something you could only do in prose, so that the medium and the finished project would be perfectly suited to one another. I decided on a novella with accompanying short stories for this reason. There would be no way to do the shorts in movies since, outside of anthology pictures, this isn’t how movies work — and then where would the novella go? It was closer to episodic television, but without the constraints of casting and budget, I could have a sprawling cast in any location I could imagine.

I started with what I had. “Coldheart” existed in comic script form, one I had ruthlessly edited down to what was at that point the best thing I had written. I treated the script as a detailed outline, and the increased space allowed me to get into things I was forced to gloss over initially. It was, at this point, a familiar kind of story to me, one of my weird noirs that has served me well for Nerve Zero, Mr Blank, Undead On Arrival, and my upcoming City of Devils. This familiarity allowed me to concentrate on world and character, trusting the mechanics of the story to experience.

When I planned the series, I was going to release “Coldheart” as the first long story in a League of Magi webcomic. When it came time to collect the story into a trade, I had to figure out a way to get people to buy something they already had for free. The solution was a single issue story that expanded on the world. I wrote “Stillwater” for this purpose. I adapted it in much the same way as I did with “Coldheart.”

For the book, I had more room to explore. I also wanted people to get their money’s worth. I went back to the copious notes that had accumulated in the project’s multi-decade lifespan. I liked the idea of each Magus using her power to amuse themselves, an idea that grew out of the Menagerie, the zoo the Twins keep of the various beasties they gate in. The story was more or less in place, though didn’t come to life until I figured out the twist and the cameo in the end. I had a very clear idea of Ash Wednesday in my head, and I wanted to show that off, and so we got “Dante Ascending” (which also has the side benefit of establishing his lair for future stories). “Dead Drop” evolved the most of all the stories, though the core concept of a doomed spy stayed throughout. “Wait” came from an errant thought and rapidly got incorporated into the whole, and now I think it’s the most important in the collection to understand what I’m trying to do with the series at large: everyone as a story, even the mooks with the guns whose only job is to die.

This was always intended as an open-ended series. Right now, I plan to stick to the format established in Coldheart, of a novella with a number of supporting stories. This might change in the future as the project and world evolves. It’s already over twenty years old, so it’s probably due for a midlife crisis or something.