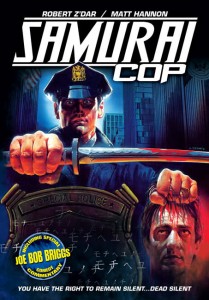 When we choose our Best of Yakmala films, we look for the most entertaining movie we can find. Make no mistake, we watch bad movies, but some offer a special pleasure. These treats will inevitably make their way onto the Best of list and Samurai Cop is one such film.

Back sometime in September, I had the idea of doing a second Copmala program with Stop! or My Mom Will Shoot and Maniac Cop 2. At a loss for a third, I slotted in Cop and a Half as a placeholder. I’ll be honest, I wasn’t really that interested in bringing Burt Reynolds back to the roster. That era of Burt flicks is marked by a uniform mediocrity that eventually led him to television and obscurity.

Yakmala team member Fernando made the suggestion of Samurai Cop and I’m glad he did. It was the treat of that program. It even bested a film featuring Robert Z’Dar and Bruce Campbell.

Okay, fine, Z’Dar is in Samurai Cop, too.

So you might be wondering what makes this film so much fun. Well, it has a special madness to it, starting with its title. The titular hero is never referred to by that name. In fact, his connection to the samurai way is vague at best. He seems to be more of a ninja than a believer in the bushido. This extends to Z’Dar’s part as well. He uses a sword … occasionally.

But the key to the film is its sub-Lethal Weapon quality. Instead of Mel Gibson, we get a would-be margarine spokesman. Instead of Danny Glover, we get our favorite element of the film: Black Partner. I’m not sure if he exactly knows he’s in a poorly made Lethal Weapon rip-off, but he’s so close to knowing that he’s simply the best part of the flick. Justin dubbed him Black Partner — in part because the film doesn’t really bother to name characters, but also because he is the embodiment of a very special film archetype. He is the affable African American best bud and workmate. A genial cop who tries to remind the hero about the rules, but is happy to break them just the same. Beyond being a higher cinematic example, Black Partner also has the most fascinating reactions to the events of the film. Using our recently obtained capture technology, we can present to you some of Black Partner’s best moments:

This is the kind of stuff we connect to, and boy did we. Justin included Black Partner in his theoretical film, Caveman Cop, which began as a joke about the oafish behavior of the this film’s main character. I sat around and actually constructed the Black Partner montage. This is special.

Oh, you want a plot? Samurai Cop (SC) and Black Partner (BP) are on the trail of a organized Japanese organized crime organization that threatens to engulf the city of Los Angeles in a tide of crime and exposed underwear. Also: Robert Z’Dar has a beard.

You know you wanted to see this!

With the aid of trusty helicopter cop Shelly, SC and BP manage to burn one of the syndicate’s capos alive before attempting to question him. While waiting for him to recuperate in the hospital, Z’Dar and a his attractive redhead assistant sneak in and behead the capo.

Somehow this leads to SC and BP confronting the Japanese crime boss directly. Using his pride in the U.S.A., SC also manages to seduce the crime boss’s lady right in front of him. BP laughs at the whole encounter.

SC visits the mob boss’s lady sometime later, where she can’t help but stand in front of a disquieting faux lion head. In the exchange, we learn the crime boss helped saved her restaurant from financial ruin. This doesn’t stop SC from convincing her that they should date while he continues to work the case. She agrees, I guess, because they’re soon seen rutting in their swimsuits.

All the while, SC and BP are accosted by Z’Dar’s men. They usually end up dead at SC’s hand.

This all leads to a climatic battle between SC and Z’Dar where they fail to wield their swords in a convincing manner. Just as SC gets the upper hand and prepares to break Z’Dar’s neck, BP reminds him that they are cops and justice must prevail. Or something. I think you know how this works out for Z’Dar and the early 90s notion of justice.

With all the crime in L.A. foiled, SC and his new lady resume having swimsuit sex on a rocky beach.

Oh, did I forget to mention that Shelly, SC’s former happy bedfriend, was probably boiled to death in her own cooking oil? Yeah, the movie forgets about that too.

This movie comes with about the highest recommendation Yakmala can ever offer. It’s fun drunk, it’s fun sober. It’s fun if you love Leathal Weapon, it’s fun if you hate buddy-cop movies. It feels like a Godfrey Ho Ninjer Empire flick while being made on 100% US soil. It features the most formidable jaw in motion picture history. Should you watch it? Oh my yes. There are three articles about this flick on the Satellite Show! That’s how much we love this movie and you will too. You should go and find it right now.

Erik Amaya is the host of Tread Perilously and the former Head Film/TV writer at Bleeding Cool. He has also contributed to sites like CBR, Comics Alliance and Fanbase Press. He is also the voice of Puppet Tommy on "The Room Responds."
View all posts by Erik →
This entry was posted in Projected Pixels and Emulsion, Sex Sex Sex, Yakmala! and tagged Best of, lethal weapon, Samurai Cop, swimsuit sex, Yakmala!. Bookmark the permalink.