A Statement About Kashmir

Signs of Kashmir’s border dispute are apparent throughout Srinagar.  Armed soldiers are stationed at all state-owned enterprises and there are piles of razor wire everywhere – even stupid places like the middle of the sidewalk. Congratulations Kashmiri military, you’ve prevented me from walking in a straight line.

On day two in Srinagar I went to a local post office branch hoping to mail a package but was told I needed to go to the general post office for shipments to the U.S.

The general post office was heavily guarded by military.  After a scanning, pat down and rigorous questioning my package and I were permitted entrance.  Once inside the postal compound and having found the correct building, the correct bureau and the correct line to stand in I was told that, today is Saturday and international shipments are accepted on Mondays only, come back then.  Not, “your package won’t go out until Monday but if you’d like to buy your postage and leave it here we, the post office, will mail it” but rather “square one: Monday. Buh-bye”.  […and face-plant]

Back at the hotel with my un-mailed package, tired of sidling around razor wire, I asked the hotel owner to recommend a peaceful place where I could sit and draw.  He suggested the Mughal garden Pari Mahal and said the only way to get there was by rickshaw (which I have subsequently learned is incorrect as there is a bus).

150 rs. round trip was what I was prepared to pay for the ride to Pari Mahal but the drivers I encountered demanded 300.  I was determined to either walk there or not go at all when a rickshaw pulled up and offered to take me for 150 rs. if I shared the car with a lovely muslim family.

Sharing the rickshaw with a family of three grown adults meant I had to sit in front with the driver.  And to the driver, this meant that he and I were now engaged.  He learned my name and for the entire ride proclaimed, “oh Katheh you soooo good Katheh!”…”they have rickshaw in your country? I come to your country and drive rickshaw!”…”Katheh I teach you how to drive rickshaw!” …”we start new rickshaw business in your country Katheh!”…”You soooo soooo gooood!”…and other creepy things that I’ve blocked from memory.  When we got to the garden he hovered around me like a fly and wouldn’t leave me alone.

Meanwhile, I was being treated by everyone else as an icon of feminism.  My hijab-less, sit-in-front-with-the-driver, pants-wearing ways made for a bizarre exotic spectacle and I was observed with fascination.

The muslim family I shared the rickshaw with were absolutely tickled with themselves for keeping such eccentric company and took numerous pictures of me to commemorate the occasion. I never felt so…”radically chic?”

Finally, I managed to ditch the entourage and find a quiet spot to sketch. But as soon as I got my sketchpad and pencils out, I was again surrounded by people.  Kids at first and then adults as well.  Soon the crowd was so thick that I could no longer see the landscape I was trying to sketch.  A few of the kids managed to jimmy their heads in between my arms and my sketchpad and were attempting to rub their eyeballs on the paper to get a closer look at the drawing; while several of the adults asked continuously, “what do you think about Kashmir?”…”what is your opinion of Kashmir?”…”how do you feel here in Kashmir?” to which I repeatedly replied, “uh…I don’t really know I just got here”.

One man was steadfast in his inquisition. “Please, give us your statement about Kashmir!”, he demanded. The crowd hushed. One woman pointed a flip cam at my face. The children in my armpits withdrew. The pressure was on.  They stared at me waiting for an answer.

The questioner glanced at the flip cam woman as if to say, “you got that?” She nodded, lowered her flip cam and within seconds the crowed dispersed.  It was as if my validation of their country was what they had all been waiting for.  They needed my endorsement before they could move on, else night would have fallen and they’d have remained in the garden…waiting.

On the ride back the muslim familiy suggested we stop at another Mughal garden: Cheshmashahi. 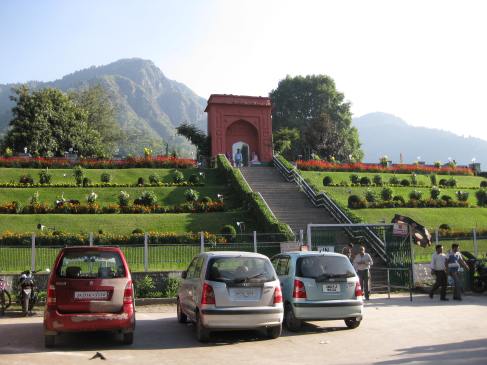 Climbing the stairs to the garden’s entrance gate I was treated to an especially distressing ass groping particularly because the hand that grabbed my ass was attached to a smug…shit-eating…ten year old boy!  …In a school uniform!

Jesus Fucking Christ kid!  And what the fuck Srinagar!?

I briefly considered taking the perverted brat by the ear to one of the by-standing security guards but decided I lacked the confidence to approach authority figures in a police state. So instead I took the event as a sign that it was time to get in a jeep and go.

I wasn’t the only one with a bad impression of Srinagar.Two guys staying at my hotel said they’d walked to a museum but when some kids began stoning it’s military guards they got out of there to avoid the aftermath.

And a couple staying at my hotel were dining at a nearby restaurant when they were spontaneously joined by “an ordinary citizen” who introduced himself as John and who just wanted to make sure that they realized it wasn’t the government’s fault that the lake was so polluted.  No, in fact the government, he said, had the funds and was ready to clean the lake but was only waiting for the houseboat owners’ association to consent.  John went on about the government’s good works pausing only to suspiciously quiz the couple about their jobs. John then suggested that they have dinner again the following night.  The couple politely declined telling him they already had plans.  On the following night however the couple wound up returning to the same restaurant.  When they got there they found John standing near the entrance.  “Oh good”, he said, “I’ve been waiting for you for over an hour”.

I don’t know if “John” was a government agent or just some creepy dude.  But I do know that Srinagar is an altogether eerie place in general.  It didn’t feel dangerous to me.  Just annoying.  So don’t avoid Srinagar because the Department of State tells you to.  Avoid it because the scenery is overrated and frankly not worth the hassle.