There’s never been a movie like Vampire Dentist. Actually, “movie” may be a strong word to use in describing this curious, um, collection of scenes acted by alleged people and shot with an alleged camera. I think there’s an overall purpose and an attempt at comedy. Again, it’s all hard to say, because … well, Vampire Dentist is the one of the rare experiences that can legitimately be called the worst of Yakmala.

In our search for entertainingly bad movies, or films of questionable quality, we occasionally come across films that are merely mediocre. Deck the Halls, Season of the Witch, and Eragon are just a few of the flicks we’ve watched and had little to say about. These are non-starters. They commit the great sin of being unremarkable in any direction. Other times, we occasionally find  something that is goes way beyond mediocre, or entertainingly bad, and enters the realm of film crime. We have a gauntlet of truly painful experience and the baseline of this rarefied list is Vampire Dentist.

The film appears to tell the story of two young dentists who set up a practice somewhere in Canada. They find it difficult to retain clients, and offer another a seat in their office to a new dentist with a peculiar aversion to the sun and an interest in offering late night hours. Eventually, one of the original dentists learns their new partner is, in fact, a vampire. 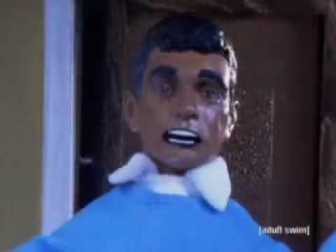 You know where I was going with this.

There’s also some sort of romantic subplot with one of the dentists and a client. Also, the titular character appears to be the Michael Corleone of a vampire mafia family, but these are merely suggestions of plot because the makers of this, uh, thing, are very unsure of how to construct a story.

Or even a scene.

The early part of the film is an assortment of the production’s attempt at the same comedic situation: the two dentists get a client, futz about, occasionally flirt with sexual assault, and find they’ve lost yet another customer. Oh, and their kindly aunt often buttons the scene with the line “Here’s a copy of our fee structure for when you come back. The first visit’s free!” Since you may not believe just how bad this can be, The Satellite Show now has the technology to provide direct evidence!

You might not get the sense of it from the footage above, but the dentist’s office is, in fact, a storage locker. This is a level of production value here that one could call non-existent. There is no dentist equipment in the “set”, seats are plastic lawn chairs and crude sound effects suggest the presence of an archaic drill. Upon first viewing, it is unclear if this is an intentional choice or just an “aw, fuck it” reaction to the limits of budget.

Alternatively, they may have spent their entire set budget on the storage space’s nighttime transformation in to vampire dentistry: 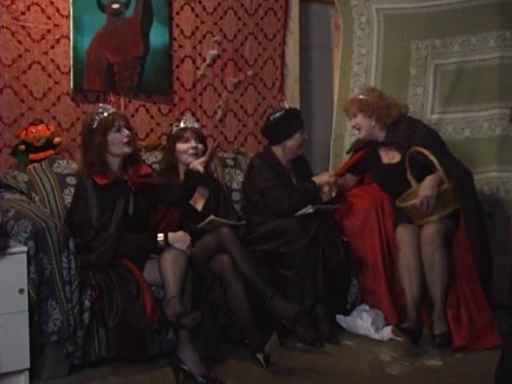 It’s quite lavish in the limited vision of the project. Note the fabrics draped over the walls and couch. It has ceased to be a storage space and has become something more: a suburban vampire bordello!

Cause, y’know, in the suburbs, you need that kind of action … or something.

It’s entirely possible the entire set budget was eaten up by that amazing painting in the corner. Take another good look at it. 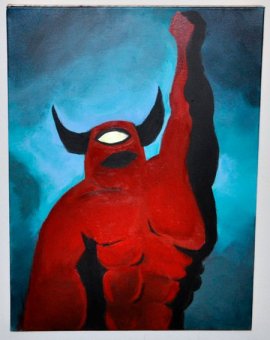 I’m convinced the devil in this painting is holding a six-pack of Schlitz just below the canvass. His goofy, slightly victorious expression is captivating. This single piece of artwork — questionably purpose-made for the flick — may be what Justin would call the flash of competence. When we first watched Vampire Dentist at a program called “Suckmala” that also featured a Twilight film and the two Count Yorga movies, it became our favorite thing as the video played on. Whenever the painting appeared on screen, we would give a reserved, slightly enthusiastic cheer. A reproduction of this key prop was presented to Justin for his birthday last year. Despite everything I’ve said so far, despite anything I may talk about after this paragraph, this is the element we connected to. Even in the incompetence, we found some spark of accidental genius. I think something like that can restore your faith in humanity.

Throughout the film, there are these disconnected strobe-light, um, passages(?) featuring an unrelated Vampire Narrator. I think they’re meant to shed some light on the proceedings, but they just hurt the eyes and confuse the mind. If that was the intent, bravo, but I sincerely doubt that was the real plan.

In the later half, the repetitious dentist office scenes are replaced by scenes of vampires attacking human-type people in the bushes of some park outside Hamilton, Ontario. They’re just as poorly executed and just as slow. There’s no variation to them except the people involved and it almost looks like they were intended to be one scene, but all added in to pad the runtime.

I’m really not sure why it would strike any aspiring filmmaker as a good idea to put all the takes of a given scene into the final cut, but it seems like large parts of the project are just that. I want to give Christine Whitlock, architect of Vampire Dentist the benefit of the doubt. I want to believe that she’s seen movies. Parts of this thing look like they may have been a school project, so I should hope she received some sort of instruction into the cinema arts … but, unlike the characters in Prometheus, it’s not what I choose to believe.

How can you not choose to believe?

Instead, I have to take on-board the notion that she meant for the film to be this way, despite the production company’s claim that it is a “campy B+-style, cleavage and legs, horror-comedy-erotic no-budget feature film geared to young males 13 – 25.” I can guarantee to you that at least five things are wrong in that quote. This is a passionate vision of what vampires do in the dull, grey night somewhere in Ontario. And, considering the accidental glimpses of the provincial Canadian burg Whitlock captures, I have to say good on them for creating something, anything, to hold the numbing nothingness at bay. Unfortunately, Vampire Dentist only does its best when capturing the painful mendacity of this unknown town on a Friday night.  It offers a hazy glimpse into a place where people grow up, live, breed, and see so little of anything.

Perhaps that devil painting is more revealing than I previously thought.

Vampire Dentist so achingly wants to be a comedy, but gets nowhere near the mark, so it just keeps trying the same joke in the hopes that it will get it right on accident, stopped-clocks style. At the same time, you can’t just brush off your mistakes with a declaration that it was meant to be a z-grade, no-budget gigglesfest. There are still rules and grammar that have to be obeyed … or at the very least, you have to try. The very best of Yakmala all have a warm, gooey center of passion. Vampire Dentist musters up all the passion of a video you might’ve shot for your Senior year Physics class. The humor is on the level of a bunch of 12-year-olds getting to play with the camera for the first time. Which would be fine if not for the fact that Vampire Dentist is commercially available.

At that point there’s a certain expectation, even if your trying to be campy, that you’re going to deliver on the promise of the handful of dollars (American) and the time your potential audience is shelling out. You have to be entertaining or else. Well, “or else”, in this case, is that Yakmala finds you and gives you the longest, most considered review you’re likely to ever receive.

Well, at least you didn’t write, direct, score, and star in your weird piece of mindcraft. At least you’re not Anthony Hopkins. Oh, but that’s another tale of the Worst of Yakmala and there are other Halloweens upon which to retell those horrors.

For a Halloween experience you might enjoy, check out Justin’s review of Bubba Ho-Tep or if you want to know more about Christine Whitlock, check out Clint’s exploration of her earnestness.

Erik Amaya is the host of Tread Perilously and the former Head Film/TV writer at Bleeding Cool. He has also contributed to sites like CBR, Comics Alliance and Fanbase Press. He is also the voice of Puppet Tommy on "The Room Responds."
View all posts by Erik →
This entry was posted in Projected Pixels and Emulsion, Yakmala! and tagged bite!, fee schedule, vampire dentist, worst of, zero db. Bookmark the permalink.