The Jaws franchise is an interesting beast. The first film is superb, right up there with Alien in its level of near-perfection. Like that other film, it was sequelized. Unfortunately, the stewards of that effort were not as talented or invested as James Cameron and his collaborators. Thus, Jaws II is a weak stew of nascent thoughts about Post-Traumatic Stress Disorder and a bunch of teenagers screaming as a shark with a scar eats them for lunch.

And this is the “best” the franchise could muster in its sequel efforts. Of course, in the looking glass of Yakmala, best becomes worst and Jaws II offers us the least enjoyable sequel.

I’ve talked about Jaws III in the past and at the time, I’d forgotten that we have actually screened the final film. It was at a program that included one of theTwilight films, so the day is somewhat blurry in my memory. I do recall it became an impromptu Shark-mala because one of the films scheduled fell through the cracks.

Now that I think about it, it might have been Street Trash.

Anyway, Jaws the Revenge is something of an infamous sequel. It features the return of Lorraine Gary as Ellen Brody, the wife of the first film’s erstwhile Chief Brody — of course, he wouldn’t go anywhere near this flounder — she’s now widowed and by the 12 minute mark, she’s also down one son thanks to a “surprise” shark attack. In the midst of her grief, she comes to believe a family of sharks are out to get all the Brodys. Her older son, Michael, reminds her that the Chief died of a heart attack.

Michael, his wife, and their daughter convince Ellen to spend the rest of the holidays with them in the Bahamas. Say, that’d be pretty sweet if not for the whole dead son thing. On the way to the island, the Brodys meet salty pilot Hoagie who … 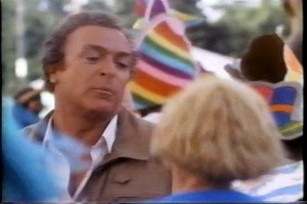 Hoagie is played by that most Teflon of actors in one of his most dizziest, booziest, laziest performances. His presence is also part of the film’s infamy as he was down in the islands for shooting instead of accepting his Oscar for Hannah & Her Sisters in person. Of the finished product, he’s only said this: “”I have never seen it, but by all accounts it is terrible. However, I have seen the house that it built, and it is terrific..” As Hoagie, he wanders into scene and tries to romance Ellen, much to the chagrin of Michael.

In fact, Michael always seems to be swatting the sexual advances of various people, including his wife who likes to throw her panties at him, his business partner Jake, who insists Michael have as much sex as he has with his own wife. I think the shark is even interest in some mating. Well, mating of the toothy kind.

Oh, darn, I spoiled the surprise. THE SHARK FOLLOWS THE FAMILY TO THE ISLANDS! In Jaws II, Chief Brody’s PTSD makes him believe the shark is chasing him. It’s a pretty cool idea if he was actually having a breakdown. In Jaws the Revenge, it’s text. Ellen Brody can feel it in the water, smell it in the air. Much that once was was lost for none now live who remember it. Wait, sorry, that’s Lord of the Rings.

So after a totally cheap dream sequence fake-out, we see Michael and Jake (played by Mario Van Peeples in his best “Jamaican Me Crazy!” accent) attempt to tag conch shells. This is part of their work as they have a grant to study … um … conch migration? Mating rituals? Considering Jake, I wouldn’t put it past him. During one of their trips out to the field, Jake encounters the shark and becomes obsessed with tracking him. See, great whites don’t like warm water and that should be enough to satisfy how implausible the whole thing is.

Y’know, like Michael wanting anything to do with water after he narrowly survived being eaten by a shark in his youth. Heh, wouldn’t you know it, that never comes up.

So at the same moment the shark appears to Jake, Ellen stops having fun with Hoagie because, get this, SHE HAS A PSYCHIC CONNECTION TO THE SHARK! Again, this is text.

Eventually, Michael daughter nearly gets eaten by the shark and Ellen decides to end this, once and for all. She steals Michael’s boat to chase the monster. When she finally meets up with it, she realizes a research schooner might not be the best weapon. Luckily, Hoagie arrives with Michael and Jake in tow. They crash the plane and it distracts the shark long enough for Jake and Michael to get aboard the boat. Wait, didn’t Hoagie make it out before the shark lunged at the plane?

No, don’t worry, he’s fine. He emerges from the other side of the boat COMPLETELY DRY.

No, for serious. Michael Caine only has a little bit of mist in his hair when he was supposed to be under water. That’s the level of dedication on display in this movie. It’s truly a marvelous thing. I could continue to tell you more about how this fucker ends, but I’ll just show you.

In context, it makes about as much sense.

So, Jaws the Revenge is a special sort of picture. Not only is it a lame fourth film in a floundering horror series, not only is it cheaply made with negligible connection to the original film, but it was made by a major studio! For this type of movie, one typically has to go to a Corman or a direct-to-video house, but Universal was kind enough to produce the nadir of all Jaws pictures. That first film created a lot of imitators, but for a good long time, The Revenge ended that. It reveals how to do everything wrong. It shows just how disengaged an entire film crew can be before a film collapses in on itself. It hasn’t quite hit the point of singularity, but its close enough to make it one of the most enjoyable movies of questionable quality a major film ever produced.

And that, like the house it built, that is terrific.

Erik Amaya is the host of Tread Perilously and the former Head Film/TV writer at Bleeding Cool. He has also contributed to sites like CBR, Comics Alliance and Fanbase Press. He is also the voice of Puppet Tommy on "The Room Responds."
View all posts by Erik →
This entry was posted in Projected Pixels and Emulsion, Yakmala! and tagged jaws, lorraine gary, mario van peeples, michael caine. Bookmark the permalink.

1 Response to Yakmala: Jaws the Revenge