As I have a “Project X” taking up my evenings at the moment, I present a Special Review Unit Mini: shorter looks back at rank and file SVU episodes. 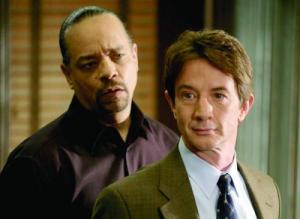 Uncomfortable Synopsis: A psychic’s aid to police leads to a nun’s kidnapping.

Memorable Line: “The best sex I ever had.”

Plot: Following the abduction of a bike messenger, psychic Sebastian Ballentine arrives in the SVU squad room offering aid to Detective Stabler. Stabler and Captain Cragen shoo him away, but Stabler soon finds Ballentine at the home of the messenger. The detective brings him back to the squad room, where Ballentine starts using his psychic tricks on the SVU team. Dr. Huang explains how psychics use techniques like cold reading to gain their marks’ confidence. Eventually, Stabler starts to wonder if Ballentine might actually be the killer; particularly after he aids detectives in finding a few more bodies and one nearly-dead victim. Following the arrival of Ballentine’s wife, the Unit learns Sister Peg has been abducted. Problem: Ballentine has been in the squad room all night. After discovering Ballentine is a Canadian convicted of the brutal assault of a fourteen year old girl, the detectives get his wife to roll on him. They also discover Mrs. Ballentine killed a woman and forcibly removed her baby from the corpse-womb. After Ballentine attempts to choke her, he admits to Stabler that it was all his doing just because he likes to see the reactions of the people he terrorizes.

Notes: Since Robin Williams made his Emmy-notice turn on a second season episode of “Homicide: Life of the Street,” comedians have used the various NBC crime shows to make in-roads into serious acting.* For the most part, these are laughable. In the case of Martin Short in this episode, though, we get a pretty chilling TV villain. Since people tend to remember him as he looked in “Innerspace”, the older, sinewy Short does look something like a live action Riddler. His face easily contorts into a demented smile and his reading of this episode’s memorable line sells him as a great SVU villain. He’s since gone on to make a memorable turn in the TV series “Damages” using similiar tactics.

Unlike the top five, this episode features very few blind alleys. Stabler spots Ballentine as the suspect once he takes him seriously and his guilt becomes fairly obvious from that point. What makes this episode worthy of note is the chess match between Short’s character and Stabler. Short goes from being a helpful, if annoying, to cuckoo-bananas with astonishing ease.

*Other comedians turned Law & Order perps include Stephen Colbert on an episode of Criminal Intent, Jim Gaffigan on Law & Order, and Robin Williams himself stepping in as an SVU bad guy.

Erik Amaya is the host of Tread Perilously and the former Head Film/TV writer at Bleeding Cool. He has also contributed to sites like CBR, Comics Alliance and Fanbase Press. He is also the voice of Puppet Tommy on "The Room Responds."
View all posts by Erik →
This entry was posted in Projected Pixels and Emulsion and tagged comedians, law & order, special review unit, special victims unit, television. Bookmark the permalink.