Starcrash may be the first Star Wars rip-off. It’s also one of the more enjoyable.

As I’ve mentioned elsewhere, Star Wars caused a tidal wave of fantasy and sci-fi filmmaking. In the late 1970s, the European film industry was agile enough to quickly fill audience demand at modest budgets. Of course, these movies tend to look like Starcrash, our last “Best of Yakmala” entry for the year.

At the time, it seemed so obvious to producers: make some starships from WWII plastic model kits, add some robots and maybe some sort of mystical power you can realize with effects animation. Seems simple enough, right? Well, almost. Starcrash realized there was one thing that the rip-offs desperately needed to compete in the marketplace:

It’s amazing what you can get away with when you have a steady stream of Caroline Munro in provocative outfits. She plays our lead character, Stella Star. A name like that would suggest the film is based on some French or Italian comic strip, but this is not the case. Stella Star, her pal Akton, and the Imperial Galaxy were all the brain-products of writer/director Luigi Cozzi (as Lewis Coates) and co-writer Nat Wachsberger. Of course, there minds were clearly addled by bootleg copies of Star Wars and whatever drug of choice Italian directors enjoyed in the 1970s.

Stella Star — an interstellar criminal — is engaged by the Emperor of the Known Universe (Christopher Plummer!?) to find the survivors of a doomed expedition to the Ghost Planet where the evil Count Zarth’Arn is planning some sort of muckety-much with the power of the whatsits. Joining Stella Star on this adventure is the robot cop, Elle, and her faithful partner, Akton.

Played by former child televangelist Marjoe Gortner, Akton is the both the most infuriating and amazing thing about the entire production. When the Greeks discovered the Deus Ex Machina, it looked like Akton. Why such a huge claim? Throughout the film, Akton’s powers grow as the plot dictates, which would be fine if not for the fact that his newly revealed talents would’ve been helpful in previous perils. It appears that he simply chooses not to be helpful, which led to Justin and I coining the catchphrase: “Oh, I could do that … but I didn’t because I’m a dick!” His douchebaggery is legendary, but the movie never seems aware of it. That makes for great movie watching as Akton’s choice to play possum means he let Elle and Stella Star walk into danger for a scene that had ZERO TENSION.

In fact, all of Akton’s powers tend to rob any situation of its inherent tension building elements. Why would he do that? ‘Cause he’s a dick.

At no point is this more apparent when Akton arbitrarily chooses to die after getting a slight lasersword burn in the shoulder. He admits that he could heal himself, but instead says his death has to do something with destiny. Was this a pang of conscience from the writers? Did they realize that his reality-warping capabilities were too much for the film to contain and, therefore, he needed to commit suicide-by-robot?

Akton would be a Yakmala troupe onto himself if not for the fact he’s the Lou of the film. A Lou, as seen in Revenge of the Red Baron, is a character so vile and ill-conceived that you spend most of the movie wishing he was dead. Then he dies and the movie completely runs out of steam. With the except of one amazing bit of dialogue, this holds true for the twenty minutes or so left of Starcrash after Akton shuffles off this dickish coil. The bulk of it concerns Stella Star, the Imperial Prince (more on him soon) and the Emperor as they watch some amateurish model shots approximate a space battle. It’s pretty bold to have our main characters take a twelve minute break and observe the movie they’re supposed to be in. It’s just breathtaking.

So, I forgot to mention that a member of the Emperor’s expedition to the Lost Planet is his own son, played well enough by David Hasselhoff. You’ll note the lack of photo, video, or any Hoff meme here because this film is really before all of that. When Justin and I first previewed Starcrash, he was a welcome relief from the perceived tedium of the first hour. In subsequent viewings, that portion became swifter and more fun. Consequently, Hasslehoff’s introduction became less of a saving grace. In fact, during the “Best of” screening, his arrival failed to create much a reaction in the handful of people who had not seen the film before.

Prior to the Hoff’s arrival, Stella Star’s away missions are generally spent with this handsome fellow. Elle is one of the more baffling choices in the movie. He’s given a kooky accent that I’ll dub “Southern Fried.” Calling it a stereotypical southern drawl would be a disservice to the entire idea of stereotypes. It’s also one of those choices that makes you wonder what European producers think of the American audience. I wonder if the European version has the character re-voiced as some local equivalent of “country rube” or if it’s an entirely different vision of the character.

One of the things that helps to dull the pain of Elle and Akton is John Barry’s sweeping space score. It’s clear he sleepwalked though this one, but a half-assed John Barry score is miles above most other composers. What he wrote for this film would fit as easily into a pirate movie or even a flick about a young woman and her sexual awakening on the French coast in 1976.

What? They used to make that movie a lot back then. 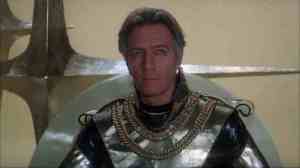 Another asset is Plummer’s wonderful, detached performance as the Emperor. He shot all of his scenes in one day and it kind of shows. The man is a professional, though, and he’s not really phoning it in as much as it seems like he was on a lot of painkillers that day. He also gets to say the glorious bit of dialogue I teased earlier: “Imperial Battleship, stop the flow of time!” After a brief pauses, he continues, “In the space of three minutes, every molecule on this planet will be immobilized.” Three minutes while the flow of time is supposed to be halted. I don’t need to be a Timelord to do the math.

Since I’m harping on dialogue, here’s Justin’s favorite spoken line in the film:

While a rough ride the first time though, Starcrash warps by on a second and third viewing. Even the characterless battle scenes become less painful if you note how often (or take a drink every time) they repeat the same “fighters launching” shot. And really, compared to Turkish Star Wars, this thing is a masterpiece of editing, lighting, and acting. Of this year’s “Best of” selections, it’s probably the one that requires the most pre-drinking.

Oh, I could tell you what's going on in this scene, but I won't. You know why.

And so we close the book on another year of Best of films and … wait, I’ve just received a note … I never did write-ups for 2011? I’ll have to fix that soon.

Erik Amaya is the host of Tread Perilously and the former Head Film/TV writer at Bleeding Cool. He has also contributed to sites like CBR, Comics Alliance and Fanbase Press. He is also the voice of Puppet Tommy on "The Room Responds."
View all posts by Erik →
This entry was posted in Projected Pixels and Emulsion, Yakmala! and tagged akton, because i'm a dick, stella star, the hoff. Bookmark the permalink.

2 Responses to Best of Yakmala 2012: Starcrash