Best of Yakmala 2012: Yor: The Hunter from the Future 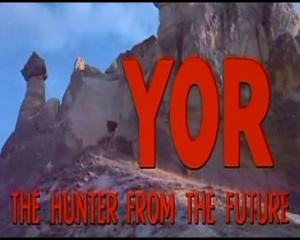 My relationship with this “Best of Yakmala” film reaches all the way back to the halcyon days when Los Angeles TV stations KCOP-13 and KTLA-5 were independent broadcasters with 24 hours of airtime to fill. In the 80s, neither station really signed off. KCOP would play that ancient national anthem film around 5AM and then announce it was beginning its broadcast day and rattle off a list of information that I think TV stations used to be legally required to announce, like their mailing address, transmitter power and frequency. This was a time before the widespread use of infomercials as time-filler and source of revenue. Back in those days, independent stations bought insane film packages to fill airtime and movies like Red Sonja, and The Terminator came to prominence.

In the LA market, KCOP and KTLA had the corner on genre fair. KTTV-11, in its pre-Fox days, concentrated on classic TV. Since I never really got into “M*A*S*H*” or “I Love Lucy,” there won’t be many wistful remembrances of Channel 11 from me on this site. KTLA, meanwhile, gave me my early love of Dino De Laurentiis productions like Dune. The station aired movie marathons over the weekend hosted by the affable Tom Hatten, who also hosted an hour of Popeye cartoons in the early mornings.

Much to my surprise, it's hard to find a photo of Hatten from the 1980s.

Meanwhile, KCOP ran Excalibur at midnight the first Sunday of every month. I have no idea why they did this, but I appreciated it. KCOP also had plenty of action movies and other cheesy flicks to air. During commercial breaks, I’d often hear KCOP announcer Harry Newman say the following, “This Saturday at three … YOR! THE HUNTER FROM THE FUTURE.” It always stuck me odd because I wasn’t sure if he was saying I was the Hunter from the Future or if the Hunter’s name was, in fact, “Yor.” For whatever reason, I was never home on Saturdays at three, so I never saw the film until many, many years later when we screened it at a brutal fantasy themed Yakmala event that included Eragon and The Neverending Story II. We watched Yor last, so it may have suffered a bit from the placement.

Flash-forward a couple of years and I’m sitting at the New Beverly Theater in Los Angeles. My friend Ian noted that they were having an all day fantasy marathon with Deathstalker II and Yor headlining as the last two films. I agreed to come to Deathstalker II as I’d never seen it and desperately wanted to. On that one admission price, I could stay on and watch Yor if the spirit moved me thus. My plan was to leave, but I had such a good time watching Deathstalker II that I decided to stick around for the first twenty minutes or so of Yor.

In that theater, I discovered a Yakmala classic.

The film, based on a French bande dessinee called “Yor’s World,” follows the titular Yor as he discovers his destiny to destroy various civilizations that grew in the wake of an unseen nuclear apocalypse. He’s actually the child of two dissidents from the planet’s most advanced village, but that aspect of the story is vaguely addressed. With him is the lovely Kala and her useless guardian named Pak. It would seem like an uninspired idea if not for a few things that make this movie fun to watch. 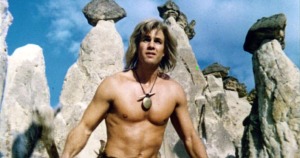 Some of you may remember Cappadocia from Turkish Star Wars and Ghost Rider 2.

3. The daft editing that comes from trying to compress a 4-hour TV miniseries into a 90-minute flick. Turns out the film was originally made for French television, but one thing you have to love about European producers and distributors is that they’ll try to sell anything to theaters. Such is the case of the 90-minute Yor. I imagine a lot of things that seem downright insane in the film version make more sense in its television presentation. Well, I hope so, anyway.

4. Star Reb Brown. He’s famous these days for his goofy, Dirk Hardpeck performances. Internet reviewer The Spoony One devotes whole months to reviewing Brown’s films. While not a subtle actor, there’s something sublime about his acting choices. In Yor, he only has a few moments of absurd yelling; a Brown staple. For the most part, he plays the character as a slightly dim innocent. You may wonder, then, why I would claim that Yor is “the man.” Thankfully, Spoony, in his review of the film, highlighted a prime example of Yor’s manness:

This is, without a doubt, some pretty damned bold filmmaking. It takes guts to realize such a scene on film using the resources available to a low-budget French TV production in the early 1980s. But, they did. It exists and Yor is, indeed, the man.

For some, though, the movie will never be better than this moment. While it never quite reaches such an amazing height — BAR ONE SCENE I WILL NOT SPOIL — it remains entertaining. In the subsequent sequence, Yor appears to allow the survivors of Kala’s village, women captured by the hairy blue men, to drown as our heroes escape. This sets the tone for the rest of the film as Yor’s rescue of Kala (and, in one case, Yor’s rescue of a supposedly attractive member of his own tribe) leads to the destruction of whatever village they’ve stumbled into. Of course, that assessment is based on the film version, which cuts two-and-a-half hours of story. Maybe we see some survivors in the television series.

Yor’s journey brings him to an island inhabited by the advanced culture that he hails from. Seems pretty convenient, but the island’s leader, Overlord, suggests that he may have guided Yor and Kala to him. His plan involves using their DNA to repopulate the world with machine clones loyal to him.

Yeah. It took me three viewings to get that all straight.

At one point, Overlord admits to being more comfortable around his robot army, but mentions a more advanced model that sounds suspiciously like Replicants. His plan requires a joie de vivre that can only be obtained from Yor and Kala getting it on. I’m not sure if he could actually pull this off as the island’s level of sophistication resembles a mid-1970s chalk mine. In fact, all of the other humans on the island tend to look like they’re permanently caked in chalk. While Yor has his first conversation with Overlord, Kala and Pak meet the leader of the resistance against Overlord’s plan. I’ve always thought he looks like an aged Martin Short trying to do some sort of albino sketch, but I’ve never managed to get a laugh out of that observation. He and his followers want Yor and Kala to return to the mainland with the knowledge that their technology ravaged the world and could easily do so again.

So, once the resistance meet Yor, they all get together and blow up the island.

Yor is a fairly minor blip in the world of fantasy. A quick Google search reveals more love for the movie (in its 90-minute form) than the comic book that inspired it. I managed to find one site interested in the original strip. They have a few pages scanned and the art is quite appealing. I don’t know if we’ll ever see it translated into English or the full four-hour TV series released in any form. A review on director Antonio Margheriti’s website laments the limited availability of Yor as a television epic.

In its film form, Yor: The Hunter from the Future offers an pleasantly cheesy look at low-budget fantasy filmmaking from the heart of the European film industry. Like its star, it’s appealing dopey in its aims and, blissfully, it lasts not one second longer than it needs. Few fantasy films make it to “Best of ” status because of their expansive runtimes, but Yor manages to consistently entertain.

Erik Amaya is the host of Tread Perilously and the former Head Film/TV writer at Bleeding Cool. He has also contributed to sites like CBR, Comics Alliance and Fanbase Press. He is also the voice of Puppet Tommy on "The Room Responds."
View all posts by Erik →
This entry was posted in Projected Pixels and Emulsion, Yakmala! and tagged KCOP, KTLA, KTTV, reb brown, the hunter from the future, yor's world. Bookmark the permalink.