The trailer was ridiculous. Five people trapped in an elevator. One of them is a killer, and possibly also Satan. With the shaky premise and vaguely recognizable faces, it looks like the kind of straight-to-DVD horror flick you watch on Netflix out of sheer boredom. Somehow enough cash got pumped into this thing to give it a slick blue studio feel. Then the seven words popped up onscreen, making half the audience groan and the other half burst into laughter: “From the mind of M. Night Shyamalan.” This is Devil.

More Accurate Tagline: Bad things happen because The Sixth Sense made a lot of money.

Guilty Party: M. Night Shyamalan, whose first two names should be pronounced like Homer Simpson suddenly learning nighttime comes with frosting. Mmmm… night made a huge splash with The Sixth Sense and most importantly the stunning twist ending in which Bruce Willis died in Nakatomi Plaza and was from the future or something. Ever since, Shyamalan has been trying to capture the magic to steadily diminishing returns and increasing evidence that he suffered several blows to the head. Though he neither directed nor wrote the script, the story his his, and he is the sole reason it’s presently rage fucking my brain cells.

Synopsis: Fuck. Okay. No matter how long I look at this blank screen, a synopsis isn’t magically appearing, so it looks like I have to write something down here. Or you could just read Louis’s, which is way more detailed than I’ll ever get.

All right. We open up on Philadelphia, and for a single, blessed moment, I hope to see Charlie, Mac, and Dennis. Nope, instead I get the kind of heavy handed voiceover that informs me I will be watching a Very Important Movie. With a soft hispanic accent (you know, hinting he has some deeper connection to truth or whatever), the narrator informs me that the devil likes to walk the earth and fuck with people, like a dick version of Kane from Kung Fu.

Five people get stuck in an elevator. Because the film is made by a pretentious ass, they’re never credited by name, but they all have them. Except for the Devil. Oh yeah, one of the people is the Devil. Can you guess which? Because it totally doesn’t matter. 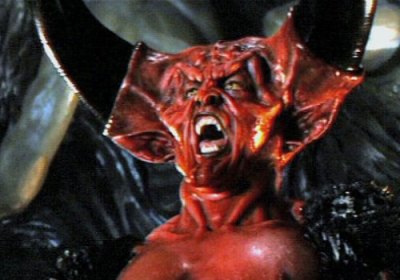 My money’s on him.

Anyway, the Devil periodically causes blackouts during which he kills the people one at a time in a completely ridiculous way. Meanwhile, Detective Bowden (he gets a name because… shit, I don’t know), started his day investigating a suicide, but forgets about that to help the stranded commuters. He gradually learns that everyone in the elevator is a Bad Person.

Bowden is also a recovering alcoholic because his wife and kid were killed in a tragic hit and run. He mentions this roughly every ten minutes because the screenwriter is pretty sure everyone in the audience had a mommy who drank heavily while pregnant. Security guard Ramirez (pulling double duty as our narrator), is on hand to explain the religious implications of what’s going on, and helpfully informs Bowden that there’s a reason the Devil picked them specifically as the audience. So we’re blaming Satan for hack screenwriters now too?

Eventually everyone dies except one guy, who gets a measure of peace through forgiveness. I find myself unable to forgive anyone involved in the making of this film.

Life-Changing Subtext: If the Devil wants to fuck with you, God is utterly helpless to do anything about it.

Defining Quote: Ramirez, finishing the Sunday school lecture disguised as narration: “After my mother would finish her story, she would always comfort us. ‘Don’t worry,’ she’d say. ‘If the Devil is real, then God must be real too.’” Real, and apparently real bored at the prospect of stopping human suffering.

Standout Performance: Bokeem Woodbine as Guard. In a performance that combines the electricity of Ben Stein with the raw charisma of an old towel, Woodbine is at turns angry, disoriented, and possibly slightly hungry.

What’s Wrong: I felt a palpable sense of relief every time one of the shrill dipshits in the elevator gets their just desserts. This is a problem if your movie is trying to generate suspense, which only happens when I’m worried that someone might die. You know what might have helped? Believable motivations or dialogue that doesn’t sound like it was mined from a North Korean Neil Gaiman fan blog.

Flash of Competence: The film looks great. Very pretty, a couple of nice, arty shots. Shyamalan is one of the best in the business at gilding a turd.

Best Scenes: “Dwight vs. wildlife” is a fantastic couple scenes. Dwight is the building’s engineer, and it’s his job to get that goddamn elevator running. First he goes down to the bottom of the shaft where a family of raccoons is somehow living. The raccoons clearly debate whether or not to fuck Dwight’s couch, but decide not to. Later on, Dwight surprises a colony of pigeons living in the shaft (elevator, not penile), and they are not so merciful. Wildlife 1, Dwight 0.

While Ramirez is doing his best to be a stereotypical superstitious Latino, he tries to explain why he knows the Devil is behind all this. To demonstrate, he throws some toast on the ground, and aha! It lands jelly side down! The work of the Devil! Or, you know, gravity.

Transcendent Moment: Bowden’s investigation into which commuter is the Devil is based around a single scrap of information: everyone in the elevator signed in at the front desk. Except for one. And that person has to be the Devil!

No, seriously. The Devil. Prince of Lies. Could not be bothered to come up with a fake name.

Devil’s biggest sin is that it’s boring. I could forgive the lazy writing, the bad acting, the stilted dialogue, the… actually, fuck it. This movie sucked. It was a horror movie that only managed one scare: right at the beginning when a vanity card proclaimed this part 1 of “The Night Chronicles.” That’s literally the only scary part.