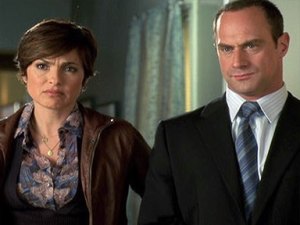 Scene depicted does not occur in episode.

Plot: Benson is paged after a night of dubious passions with fellow Detective Brian Cassidy to handle the case of Harper Anderson. She was raped earlier in the night by a white man with sandy hair and tendency to please and the episode’s memorable line. After a grueling five hours of reliving the nightmare for Detectives Benson and Stabler, Harper is left in the care of her boyfriend while the SVU team gets to work. After speaking to a peeping tom across the road, they come upon a suspect who used one of Harper’s credit cards to by a ton of meat (literally). Benson calls Harper in to ID the guy, but before she arrives, the squad learns he was in a lock-up for jumping a train turnstile at the time of the attack. Harper gets to the station just in time to learn her rapist is still at large

Benson plans to go on a date, much to Cassidy’s disappointment, but her plans get canceled when Captain Cragen calls her in to listen to the details of an attempted rape case in the 27th Precinct: the man was white, with sandy hair who said both “please.” When Benson interviews the victim, she learns the rape was more than attempted and that the perp asked “Is this how you like it?” Officers from the 2-7 also picked up investment banker Kenneth Cleary near the scene as he was limping and matched the description, but had to let him go because he had a high-powered lawyer on retainer. 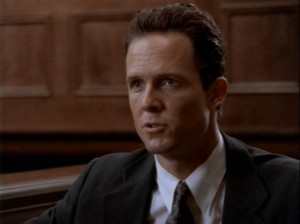 Benson tracks down Harper, who is not responding well to any of the counseling methods suggested to her. After a heart-to-heart about closure (yes, the title gets repeated several times), she agrees to ID Cleary.

Oh, I forgot to mention something. Back on the night in question, Harper told the detectives that the perp took a ring from her. It was a family heirloom and quite unusual. Stabler spotted it on Cleary’s wife when they first come to interview the banker. It gives them just enough to bring him in for a line-up.

When Harper does come in, the men in the line-up are instructed to say the memorable line. Cleary is placed second to last, but it makes little difference as Harper doesn’t recognize any of the men as her rapist. Following the session, Benson produces Harper’s ring. The victim is devastated to learn she could not remember her attacker’s voice.

Part 2 is set an indeterminate amount of time later and begins with a call to 911. Someone (I’ll just spoil it now: it’s Harper) tells the operator that there is a rape in progress. When Benson arrives on the scene, she recognizes all the details as the work of Kenneth Cleary. With a new victim, the detectives beginning looking for the witness who made the 911 call. The path quickly leads them to Harper, who has become obsessed with Cleary. She stalks him from a “legal distance” and monitors all his activities outside of work. She also has an over-sized copy of his arrest photo hanging over kitchenette sink.

It also turns out that Harper has been making harassing phone calls to the Cleary household, which leads to a confrontation between her and Mrs. Cleary on the street. When Harper smashes in Kenneth’s windshield, Benson is forced to put her in cuffs and take her to the station.

At the same time, Munch has discovered that a string of rapes in the Philadelphia area match times when Cleary was in that city on business. With Finn in tow, Munch catches a train to Philly to question some victims. They all tell him the same thing: their attacker asked, “Is this how you like it?” Upon their return, Mrs. Cleary is presented with a list of items stolen in each of the rapes. She’s appalled to find that each one matches a “surprise gift” Kenneth gave to her. Upon receipt, he expected her to perform sex acts and would take care of himself on the occasions when she refused.

Now swayed, Mrs. Cleary offers to help Harper get justice (or, closure, I guess), but ADA Cabot points out that she can only ask questions about the stolen items as anything else (like the sex) falls under spousal privilege and cannot be admitted in court. Mrs. Cleary ignores this and tries to sandbag her husband while on the stand, which backfires and leads to a mistrial.

Back at the squad room, Cragen offers Cabot a sympathetic ear and drink, though he declines one for himself because liquor is his demon. Cabot tries to turn this into a pity party, but the phone rings before that can proceed any further. Kenneth Cleary has been shot dead at his home.

When Benson and Stabler arrive, Mrs. Cleary tells him he began hitting her and she shot him in self-defense. Harper is also present and tells the detectives that she wiped up the blood with bleach because Mrs. Cleary didn’t want it to stain the floors. Turns out the bleach screws up the crime scene unit’s gunshot residue tests. While both women stick to their stories, it’s pretty clear who shot Kenneth.

And, thus, we have closure.

Why its one of the worst: From my summary, it’s pretty easy to guess that I have a special disdain for both episodes called “Closure.” Though it’s not the worst stories every told, it features a lot of the problematic elements that make a truly bad episode of the series.

When I started the Bottom Five, I mentioned that countdowns figure regularly in episodes of SVU that fail. The first part of “Closure” introduces this device, with the teaser and first act timestamped from the moment Harper calls the police to the moment when Benson drops her off at the boyfriend’s apartment. I get the point. The idea is to reveal the laborious process of investigation in the first 18 hours of a rape call and the effect it has on the victim. Sadly, I don’t think it works. Like other time devices on the show, it adds a structure on an already well-placed structure. The break from format never serves the show and, here, it underlines the greater problem with “Closure.”

Simply put, the two episodes read like a writing room’s guilty conscience. Having utilized the lurid details of sex crimes for their show, the staff tries to use the first episode to do something socially conscious by illustrating a more realistic case. For real overworked cops across the nation, nothing moves as quickly as it appears in the “Law & Order” world. For victims, well … that difference between reel life and real life is obvious.

But this is “Law & Order!” If I wanted to see a police procedural where the criminals get away and the police are inept or shackled by the law, I’ll watch “The Wire.” 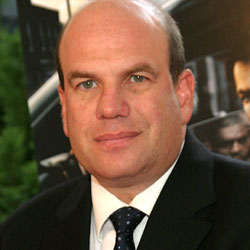 The key thing about network crimes shows is this: they’re meant to be reassuring. Since the dawn of the genre, the point is to make the audience feel better about law enforcement and to impart the notion that smart people are out their — sacrificing almost everything — to hold back the tide of chaos. In “Closure,” we get the failure of the compact with the audience and that unease appears not only in the break of format, but the casting.

I’m not trying to be insensitive here, but Tracy Pollan does not play Harper very well. Within minutes, the sympathy we’re supposed to have for her drips away when she puts on her shrill “I’m a victim, but I’m fighting it” voice. I’ve seen her use it in the Natalee Holloway Lifetimes movies and it has the same effect: I find her hard to cheer for. This is doubly true in the second “Closure” when Harper is revealed as unhinged. Her conviction ventures into the most poisonous type of self-righteousness and even though she is supposed to be slipping from victim to perp, it reads wrong. Pollan received an Emmy nomination for her portrayal of Harper … which I think illustrates how the awards system is well and truly broken. 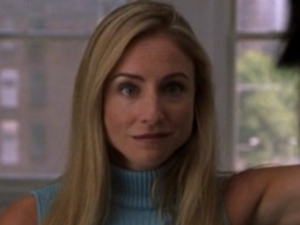 The first “Closure” also offers up more cringe-worthy Benson material, a staple of the Bottom Five. Her one night stand  with Cassidy plays up the time element as we see him grow bitter after the flash-forward, but it also makes her a weaker character. One of the great aspects of SVU as a whole was its choice to refrain from Benson and Stabler making their relationship anything close to romantic. Oh, it’s brought up from time to time by people outside of the group, but the two never went down that road and, I think, the characters were stronger for it. But here, in the first season, we see the writers were still unsure how much soapy drama to inject into the series and, therefore, we get Benson and Cassidy under the sheets and later at odds.

At least, it eventually served as a reason to remove the Cassidy character entirely.

The first season is largely a conflict between two shows: “Law & Order” and “Sex Crimes.” Soapy relationships, format breaking, and the presence of Detectives Brian Cassidy, Kenny Briscoe and Monique Jefferies (more on her next time) all come from that other show. Like Cassidy, most of these things disappear in the second season, only reemerging in episodes of the show that fail to measure up to SVU’s bizarre standard.

It also makes the second “Closure” all the stranger. With the cast now firmly in place, they try to bring this story into the crazy-go-nuts world SVU was starting to explore. Harper’s failure to find closure and descent into vengeance could be interesting, but with Cleary’s wife joining Harper’s side and the silliness of Alex Cabot’s courtroom scenes, we see a last hangover from the first year spill into the more focused show SVU was becoming.

Well, not the last hangover … but that story is a our final Bottom Five review: the single worst episode of SVU ever.

Erik Amaya is the host of Tread Perilously and the former Head Film/TV writer at Bleeding Cool. He has also contributed to sites like CBR, Comics Alliance and Fanbase Press. He is also the voice of Puppet Tommy on "The Room Responds."
View all posts by Erik →
This entry was posted in Projected Pixels and Emulsion and tagged law & order, special review unit, svu, timestamp, tracy pollan. Bookmark the permalink.