Now Fear This: The Company of Wolves

She looks mildly irritated that this is happening.

As the ending credits rolled, Mrs. Supermarket turned to me with an expression of baffled annoyance and snapped: “The director was molested, wasn’t he?”

I shrugged. “Well, he is Irish Catholic.”

I had just made her watch Neil Jordan’s 1984 cult werewolf movie The Company of Wolves. I’ve had a relationship with this film since seeing the box in a video store as a child and being darkly fascinated by the image of a wolf being born from a man’s screaming mouth. I never got around to seeing the actual movie until I was in my twenties, and I fell in love immediately.

Which is weird, since it’s paced abominably, doesn’t make a lick of sense, and isn’t all that good. But I love it. Completely unreasonably and with every fiber of my being. I feel like the parent of a serial killer. No matter how many prostitutes the sick little fucker carves up and bakes into wedding cakes, I have to love him. I adopted the boy. He was already fully formed when I picked him out of that haunted orphanage, but something about the way he tries to sew raccoons together to form a creature he insists on calling a super-raccoon makes me treat him like my flesh and blood. Now, I realize I’ve already mangled this metaphor beyond recognition (like my hypothetical kid did to that busload of pageant contestants), but the super-raccoon in this case is a reinterpretation of Little Red Riding Hood as a feminist myth.

I wasn’t kidding when I said the movie doesn’t make any sense. On its face, The Company of Wolves is almost entirely a dream sequence, inside of which two characters periodically break from the plot to tell stories. As the movie progresses, the barriers between the three worlds (real, dream, and dream-story) begin to break down, until they are effectively one and the same. Thus, summarizing the plot is difficult and probably misses the point at least a little bit. Not that this will stop me.

This kind of thinking has gotten me into trouble in the past.

Twelve-year-old Rosaleen sleeps in her room, dreaming of a life in an 18th Century village (centered around a well that somehow manages to be both phallic and yonic at the same time), where her sister has been killed by wolves. After the funeral, Rosaleen goes with her grandmother (Angela Lansbury) to stay the night. Grandma uses the first of the four stories to warn Rosaleen about men in general and werewolves in particular. Later, in the garden of a priest (for maximum symbolic import), Grandma tells the second story about a boy getting a potion from the Devil that transforms the lad into a wolf, and begins to break the barriers between story, dream, and reality.

Back in the dream, a young boy asks Rosaleen to take a walk in the woods (apparently the local equivalent of an invitation to a rest stop), which turns bad when they discover evidence of a large wolf preying on local livestock. As the boy helps the local men lay a trap for the wolf, Rosaleen tells the third story, of a witch’s revenge against the nobleman that knocked her up. The wolf is then killed, but Rosaleen’s father reveals that what was once a wolf’s paw taken as a trophy (it was a different time) has become a human hand. Finally, we get to the Little Red Riding Hood portion of the film: Rosaleen takes a basket to grandma’s house, encounters a huntsman along the way, who proves to be a version of the Big Bad Wolf. Less a raging killer and more of one of those misunderstood bad boys that exist only in the adolescent imaginations of female writers (a distaff Manic Pixie Dream Girl of sorts), he attempts to seduce the twelve-year-old Rosaleen. Which is totally cool, because that’s like eighty-four in dog years. Rosaleen first takes command of the seduction, then tells the wolf, the final story, about a she-wolf coming into the world and just as quickly leaving. The next morning, a search party comes to Grandma’s house to find that Rosaleen has become a wolf, who then runs back into reality to break into the sleeping Rosaleen’s room.

Everybody still with me?

The film only starts becoming semi-lucid when viewed inside-out (although Jordan has stated that lucidity was never his goal), starting with the hypo-hypodiegetic level — the stories within the dream. The first story, about a newlywed man disappearing suddenly in the middle of the night only to reappear years later as a werewolf, is meant to instill fear in Rosaleen about destructive male sexuality. Men are animals, Granny explains, ushering her granddaughter into an unhealthy terror of sex that has been passed down from mother to daughter until scientists discovered the clitoris in 1948. The second story continues this theme, in which the potion transforms the young man: in essence, starting him on that super-puberty that werewolf myths often symbolize. It’s the 18th Century, but the Devil gets around in a pimped out Rolls because he’s the fucking Devil and invented pimping. Rosaleen, in a peroxide wig, is his chauffeur, hinting that, in Granny’s mind, it’s hot jailbait that gets Old Nick into the mind of young men.

The second two stories come from Rosaleen, and in both cases, are about women seizing their destinies. In the first, a witch (identified by her red hair), turns an entire wedding party of aristocrats into wolves that she then forces to sing for her and her illegitimate infant. Proving her working class loyalties, the servants are spared her wrath, and even toast her with stolen champagne. The final story is about a she-wolf forced to take human form when a man wounds her for no reason, then, nursed back to health, she returns to her world. Additionally, the wound comes from a very phallic gun, implying that the symbolic hurt is more sexual. With these stories, Rosaleen first expresses the power of the outsider, then asserts her purity.

Going up one level to the dream provides some context: it’s about puberty. As Granny tells her first story, she’s knitting Rosaleen a bright red shawl, a splash of color that echoes the blood periodically spilled on white snow, the bad apple she bites into, the makeup she wears, and the berries that nearly tempt her from the path. In short, a loss of innocence, which is exactly what Granny warns Rosaleen of in the first story. It’s a red that says, “hey, this girl is menstruating now, so you can totally put a baby in there.” 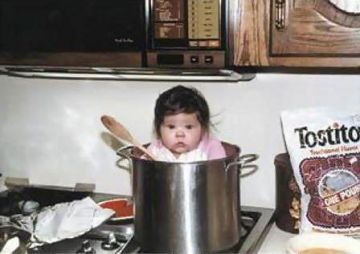 She is wearing it during her deeply symbolic walk with the local boy that wants to hit that, the walk interrupted by a white dove that practically has “purity” scrawled over it in black spraypaint. After running away from the boy’s innocent yet creepy come ons (it doesn’t help that he is missing a tooth, sporting a giant white man’s afro, and has the squashed nose of a forty-year-old prizefighter), Rosaleen scales a massive tree, finding a nest at the top, containing a tiny pot of makeup, a hand mirror, and four eggs. She applies the makeup (again showing that yes, she is open for business), before the eggs hatch into tiny baby statues. One of which sheds a single tear when Rosaleen shows it off to mom. If this scene sounds weird, then I’m underselling it. It’s fucking bizarre, every action pregnant with dream-logic (and tiny crying statues).

Right after Rosaleen’s sister goes into the ground, Granny laments that there was no one to protect her. Rosaleen innocently asks: “Why couldn’t she save herself?” This lays the groundwork that Rosaleen is no shrinking violet. Her stories are about female empowerment, and when it comes time to face the werewolf, she she emasculates him by taking his gun, then turns the tables by effectively seducing him. Her ultimate transformation into a wolf is an acceptance of womanhood in the context of a dream, but the wolves burst out of her sleeping mind to crash through the windows of her room, smashing her toys and ripping a terrified scream from her throat.

But that’s what Rosaleen wanted all along. In the reality of the film, she is sulking upstairs with a stomachache, most likely the first onset of menstrual cramps. She’s also fully made up, having raided her sister’s makeup in a bid for early adulthood. The scream in the end is the acknowledgement of the monkey’s paw: she got what she wanted, but it’s still frightening.

The scary part is that I’m barely scratching the surface. The Company of Wolves is lyrical, deep, beautiful and above all, weird. The dark woods are an expansive sound stage. The werewolf transformation effects are a triumph of makeup and puppets. Every shot can be dissected for layers of meaning, something the film tells you to do with its very structure. Do not watch this film looking for canine escapism. Try to experience it as you would a dream, then pick it apart like Freud. You won’t be disappointed.

Oh, and the frogs symbolize the cusp of innocence and adulthood. Seriously. Pay attention to when they appear.

Author, mammal. www.captainsupermarket.com
View all posts by Justin →
This entry was posted in Projected Pixels and Emulsion and tagged little red riding hood, Now Fear This, symbolic puberty, The Company of Wolves. Bookmark the permalink.

6 Responses to Now Fear This: The Company of Wolves