I may have mentioned this before, but I think Stallone is a profound thinker.

Yeah, I know, but hear me out.

He certainly has a viewpoint about the world and, I think, puts a lot of time into considering it. Unfortunately, by the time his thoughts hit the keys or escape his lips, it comes out in bite-size catchphrases like “Eye of the Tiger” and “Go For It.” While that later phrase failed to make an impact, the former was certainly more successful in the popular culture, what with a song, video, and montage that was inescapable in 1982 when Rocky III came out. 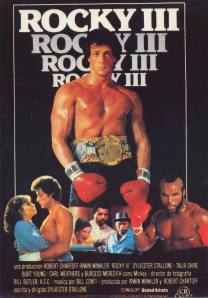 Rocky III was also the first Stallone film I ever experienced. In my memories, I remember piling into my mom’s Camero with my grandmother and my uncle. We went down to the now defunct Starlite Drive-In in El Monte, California. A surprising number of my early film memories concern this Drive-In. Star Wars, Star Trek II: The Wrath of Khan, and Pee Wee’s Big Adventure were some of the films I remember seeing there … but Rocky III stands out for the one image I clearly remember: Rocky hitting a statue of himself with his bike helmet.

Little did I know how important it would be one day in the pages of the Stallone Diary.

On the timeline, Rocky III just predates Stallone’s transformation into an action star. Movies like Nighthawks and Paradise Alley would soon be a memory as Rambo: First Blood, Part II would take Stallone to untold heights of fame and success. Well, he still had the first First Blood and Rhinestone ahead of him, but really First Blood, Part II would start a ride that would last for quite awhile. Following that, Stallone entered a period of creative frustration and a later period in the wilderness that would require the combined strength of Rocky and Rambo to redeem him.

Rocky III picks up in the final moments of Rocky II, with the Italian Stallion winning the heavyweight title from Apollo Creed and hugging Mickey for all the hard work. After our first montage, the story starts a few years later with the Balboas now well-off in a nice mansion with several nice cars. Rocky now has endorsements, an appearance on The Muppet Show, and several defending bouts under his belt. He also has Clubber Lang chomping at his heels, desperate for a chance at the title. At the dedication ceremony for Rocky’s statue in front of the Philadelphia Museum of Art, he challenges Rocky and Mickey. He also openly invites Adrian to his apartment to see “a real man.”

Despite Mickey’s protests, Rocky agrees to the fight and decides to train in the most outlandish, vain, and ineffective way possible. The gym is open to the public, Paulie is hocking Rocky merch, and a large Leroy Neiman mural hangs behind the training ring. 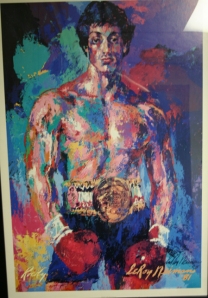 This is the key to a good training routine.

He even got Frank Stallone to write a special song for the sequence:

Though Mickey tries to help Rocky train, he fears that Clubber’s hunger will overpower him. As the old man says, “He’ll kill you to death in three rounds!” It also turns out he was fixing the fights so Rocky only defended his title against “good fighters” who lacked the hunger of Clubber. So the continue on this course with Mickey powerless to stop Rocky’s flippant attitude toward the fight.

So, as you might know, Clubber Lang wipes the floor with Rocky and Mickey dies of a heart attack right there at the arena. So, yeah, he was right. Clubber was a killer.

Rocky is despondent and goes for a drive on his bike. He eventually finds himself outside the museum, where he attacks his statue with his helmet. Somehow, this calls Apollo Creed to Rocky’s side, where he discusses how Rocky fell for the same traps he did. Fame stole their hunger and to get it back, they need the “eye of the tiger.”

So Rocky, Adrian, and Paulie fly out to Los Angeles and meet Apollo at the downtown gym he started at years earlier. With Apollo and his old trainer Duke, Rocky tries to learn a new way of fighting. Apollo’s got a plan … it’s too bad Paulie is a latent racist who hates the “jungle-jump music” Apollo uses as part of the regiment.

It’s just another remix of “Eye of the Tiger.”

This is also part of Apollo's program.

Eventually, Rocky makes a breakthrough. He can’t fight as hard as Clubber because he’s afraid to lose everything: Adrian, Rocky Jr., the house, the cars. Um, Paulie. This realization allows him to push harder and hit Apollo’s high standards. Finally at the rematch, Rocky defeats Clubber and punches him so hard that Mickey comes back to life.

I’m kidding about that last part.

I think the moral of Rocky III is incredibly clear: stay hungry and do not trust your fame. At various points in the film, character’s point out to Rocky that material trappings are holding him back. Mickey calls it “getting civilized.” Clubber simply says “You ain’t got it no more.” Even Adrian questions him on the point in a rare moment when she refrains from telling him that he can’t win. The astonishing thing here is that Stallone senses this scenario as a possibility a full 15 years before his powers as a box office draw would falter.

Which brings me back to that image of Rocky attacking his own statue. How is it that I interfaced with the feelings of guilt, grief, and disappointment Rocky has in that moment? Looking at it now, it’s also obvious, complete with Rocky using a motorcycle to get up the steps instead of his traditional run. But at the age of 5, how did I even understand what was going on? That statue, which is still in Philadelphia to this day, is as much about Stallone as it is Rocky. It’s a solid icon of Stallone’s fame … to say nothing of the character that forever dominates his career. I knew none of these things at the time, but somehow the power of that moment got through and stayed with me. Clearly, it began an appreciation of the man that led me right to this whole crazy project. 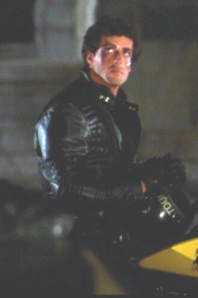 With this shot, The Stallone Diary began ...

As for Stallone, the man never quite got the point of his own movie. Clubber Lang isn’t a person. In real life, he wasn’t Jean-Claude Van Damme or John Travolta’s reinvention following Pulp Fiction. Clubber was just time personified and Stallone, despite having wisdom enough to craft a warning, could not see Clubber coming in the form of an marketplace apathetic to Cop Land and Driven. Instead, he followed the course of fame, celebrating it in his next directorial effort, Staying Alive.

But we know all about that movie …

He would also go on to make his real action hero debut a few years later, transforming into the HGH-addled goofball we all love to mock these days. But at one time, he was clever enough to let the world know that the need to accomplish great things is a desire no one should ever lose.

Stallone By The Numbers

Flashbacks: One to events in the film

Appearances by Frank Stallone: One

Songs by Frank: Two, Take You Back and Pushin’

Erik Amaya is the host of Tread Perilously and the former Head Film/TV writer at Bleeding Cool. He has also contributed to sites like CBR, Comics Alliance and Fanbase Press. He is also the voice of Puppet Tommy on "The Room Responds."
View all posts by Erik →
This entry was posted in Projected Pixels and Emulsion and tagged clubber lang, eye of the tiger, rocky iii, stallone, the stallone diary. Bookmark the permalink.