The First Article of Ape Law

Over the weekend, I saw Rise of the Planet of the Apes. It turned out to be a good flick despite it’s unwieldy title and questionable goals. Besides entertaining me, it awoke a long-dormant love of the entire “Apes” series. From 1968-1973, Twentieth Century Fox produced five films based on the notion of talking primates. Each was made more cheaply than the last and it grinds the on-going story down before some of the more interesting notions could really be explored.

But, for a moment, let’s go back to the book that started it all, Pierre Boulle’s La Planète des singes. It first offered us the backwards civilization Charlton Heston would later deride. In the novel, an astronaut lands on a distant world populated by intelligent apes and primitive humans. The ape society is roughly contemporaneous with the time the novel was written, but takes place hundred of years from now. It is also stratified along racial lines: Gorillas are seen as aggressive and militaristic, the orangutans as conservative elements, and the chimpanzees as intellectuals.

Though initially accepted into the Ape world once he learns their language, the astronaut is eventually scorned. A fear grows that he might lead a revolution of humans and end the peace and prosperity of simian culture. He escapes from that world only to arrive on Earth some 700 years after he left … and to see it too has become a “Planet of the Apes.”

See, even from the beginning, the “Apes” concept had twist endings and a healthy dollop of cheese. 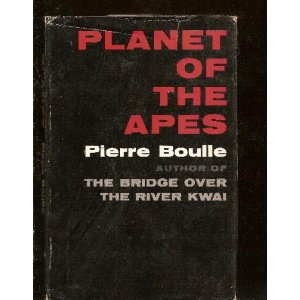 This, to me, is an important factor in enjoying the “Apes” movies: cheese is in its very DNA. Before you get to hokey make-up effects, James Franciscus trying to out-ham Chuck Heston, or the enduring image of Dr. Zaius, there is the very goofy basic premise: talking apes mimicking the human world of the Twentieth Century.

And for the longest time, it only appealed to producer Arthur P. Jacobs. The fact he also produced the original “Dr. Doolittle” is not a coincidence.

For years, Jacobs hoped to adapt La Planète des singes into a film. He commissioned a script from the likes of Rod Serling and a ton of paintings depicting his vision of that primate world. It included the Apes in modern clothes and slightly more sophisticated technology. He intended to have flying machines and plenty of interesting devices that would need to be designed by top men in the business.

And, for years, no one took his talking monkeys picture seriously.

Originally an agent, Jacobs went in a different direction, hoping to attract a star to his project. He got Charlton Heston. While he’s little more than a punchline these days, Heston was a powerful force in the late 60s. He stared in important epics like The Ten Commandments and Ben-Hur. His named carried a lot of weight, even if he headlined a movie about a rampage of vicious ants. Heston also brought with him a talented director named Franklin Schaffner. With these two elements in place, Jacobs was able to secure financing at Fox, but the money the studio was willing to dole out meant that the sophisticated ape world he envisioned would have to be scrapped for a much more rural, curious, and interesting one. The cave-city depicted in the first two movies. 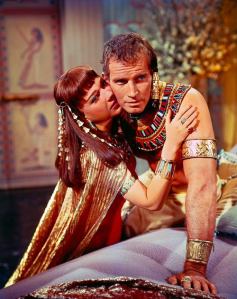 In the film, Planet of the Apes, Charlton Heston stars as astronaut George Taylor, the last survivor of an advanced NASA project that [uh-oh, continuity glitch]. Crash-landing on the new world, he finds man occupies a lower place relative to the speaking, thinking, apes. Like the novel, ape society is drawn in the stark Gorilla/Orangutan/Chimpanzee troika. Also like the novel, the seeming head of that society is Dr. Zaius, played by Maurice Evans. Zaius is an interesting character. He has plenty of integrity, but his virtuous aspects disappear when his overriding fear of Taylor and what he represents manifests. Zaius’s fear isn’t just related to progressive ideas in Ape society, but a genuine religious terror that this talking man-animal (to borrow a term from another book/movie) is the harbinger of the end times.

While that would normally be dismissed as crazy talk, it turns out Zaius was right. In Beneath the Planet of the Apes, Taylor becomes the Right Hand of Doom (to borrow from another comic book/movie series), literally causing the end of the world.

There were also these mutant human people.

Oh, but wait … this is science fiction (sorta) and anything can happen. In this case, Zira and Cornelius, the two chimps sympathetic to Taylor, found and restored his spaceship with the help of a third chimp who was already thinking about astronautics at the time Taylor arrived. The three managed to lift off just as the Doomsday weapon ignited. They saw the “rim of the earth melt” before entering a so-called “backward disturbance” in time.

And they landed in California circa 1972. I won’t get into this third film, Escape from the Planet of the Apes too much, except to note that it hews fairly close to Boulle’s novel with the roles reversed. It also ends rather ominously, with the child of Zira and Cornelius surviving under the tutelage of Ricardo Montablan.

A harrowing vision of an almost future.

Beneath, Escape, and the subsequent film, Conquest of the Planet of the Apes, all stem from the brain of British writer Paul Dehn. He first created the continuity glitch I mentioned earlier. In the first film, Taylor’s mission was a deep-sleep exploration mission with no intention of return. In Dehn’s version, Taylor’s ship was lost in what he called a “Hasslein Curve” — a  rift in time that allowed travel back and forth on a 2000 year time scale. The end of the world occurred around 3953 and Dr. Hasslein, the character credited with this space-anomaly theory, fears that doomsday clock began with the arrival of Zira and Cornelius.

Cornelius eventually tells Hasslein and some G-Men that Ape society began on a historic day when an ape named Aldo stood up and said, “no.” Curiously, in Conquest, this story goes through a continuity glitch of its own and Caesar, the son of Zira and Cornelius takes Aldo’s place in the story.

Oh, but it gets stranger. A gorilla named Aldo appears in Conquest and the final film, Battle of the Planet of the Apes.

Clearly, Dehn had a plan. It was a dark one which included a virus that wiped out all dogs and cats, the violent overthrow of mankind, and nuclear devastation. With the exception of Aldo, Dehn was setting the series on a course back to where it started with man reduced to dumb animals and apes, in their fear and stubbornness, assisting in the destruction of planet Earth. 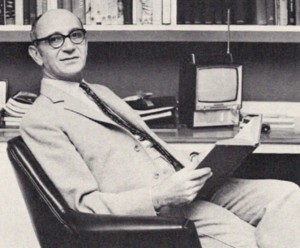 Paul Dehn working out his plan.

I even get the feeling that in Dehn’s original version of Battle, he intended for Aldo to kill Caesar and replace him in the history of the Ape world. Which brings me to the most fascinating and unseen character in the series: the Lawgiver.

Played by John Huston in Battle‘s framing device, The Lawgiver is the most revered figure in the original Planet of the Apes. His sacred scrolls define Ape Law and give the world Taylor sees its theological foundation, but just who is the Lawgiver? From the moments we get with him in Battle, he existed some 300 years after Caesar and taught both humans and apes the articles of Divine Will. He is also the crux of the incomplete history of the Planet of the Apes, the point at which the future and the past collide. He is a figure who knows the truth about the downfall of man, and eventually leaves a warning to subsequent generations about the end of the world. 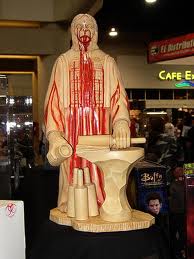 The Lawgiver, seen bleeding at Comic-Con.

Not being much of a character, he’s also the fulcrum point for Dehn’s entire multi-film saga. With the “Apes” films coming to an end, Dehn was asked to soften his hard-edged approach to the material. His story was further revised by another pair of writers. In the end, Caesar kills Aldo and gives the remaining intelligent humans free reign to live as equals. There is, after all the destruction, an uneasy peace. The final image of the first “Apes” cycle is a statue of Caesar crying. Despite the warmer tone of Battle, the ambiguity of that image calls to the bloody, apocalyptic undercurrents embedded in the cheesy sci-fi imagery.

Wow, and I’ve just scratched the surface. For a set of goofy movies, the “Apes” saga touches on themes of predestination vs. free will, class struggle, racism, animal cruelty, temporal mechanics, and violent revolution against oppression. Despite the seeming innocence of the concept, “Planet of the Apes” can’t help but be a vehicle for controversial material to get to a major audience. Even Rise of the Planet of the Apes gets into bio-ethics, animal rights, and James Franco’s on-going war against good choices. I think, perhaps, there will be a Second Article of Ape Law at some point navigating one or more of these topics.

Maybe, like Dehn, I’ll even loop around to the beginning. 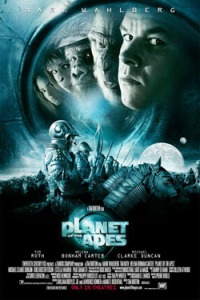 Luckily, we don't live in a world where Tim Buron made an abortive "Apes" remake and ... oh, we do. Shit.

Erik Amaya is the host of Tread Perilously and the former Head Film/TV writer at Bleeding Cool. He has also contributed to sites like CBR, Comics Alliance and Fanbase Press. He is also the voice of Puppet Tommy on "The Room Responds."
View all posts by Erik →
This entry was posted in Nerd Alert, Projected Pixels and Emulsion, Puffery and tagged charlton heston, cheese, james franciscus, james franco, planet of the apes, social commentary. Bookmark the permalink.

1 Response to The First Article of Ape Law