Note: This Yakmala Rewind will also serve as a page out of The Stallone Diary: One man’s attempt to come to grips with one of the greatest filmmakers of our age, Sylvester Stallone.

Cliffhanger is a film I cancel plans to watch. Back before I had a life or a DVD copy, the announcer’s words, “Coming up next, Sylvester Stallone in Cliffhanger,” would mean two hours of my life would go to the whims of basic cable. I avoided buying a copy because, in those days, a broadcast of the film was a treat. I also brought more than one person into it. A friend of mine became so charmed by the extreme sport guys in the film and their would-be catch phrase, “We like it extreme!” that it became his battlecry for awhile.

I can’t recall when the film made it into Yakmala. Maybe it was around the time I finally broke down and bought a copy. It’s tailor made for our purposes. It has Stallone, guilt, silly sets, and Michael Rooker.

Plot: Stallone plays Gabe Walker, a member of Rocky Mountain Rescue haunted by the death of his best friend’s girlfriend over a high peak. He returns to town to get his things and have an emotional scene with his fian—er, girlfri—er, Janine Turner. Oh, but wait! Evil treasury agents have stolen millions of retired currency on behalf of international terrorist and money launderer Eric Qualen (John Lithgow in a somewhat subdued performance). Oh, except they bungle the midair robbery and the cases land in the Rocky Mountains. Qualen’s group forge a distress signal and it’s Hal (THE ROOK!) and Gabe to the rescue.

Once they get there, Qualen’s international group of oddball terrorists/money launderers threaten their lives unless Gabe gets a case filled with loot of off one of the cliffs. The dudes even take his gear and jacket. Now that’s, literally, cold. When Gabe determines that they’ll kill him when the case comes downs, he arranges for a small avalanche to separate him from the rest of the group. They assume he died in the resulting tumult and move on with Hal to the next case.

Oh, but that wily Gabe managed to hold on and using little else but his hands and forearms, makes it to a old shelter/museum where Janine Turner’s character Jesse is waiting for him. How’d she know he’d be there? Um … some kind of weird code that Hal said when Qualen let him answer the walkie talkie.

Meanwhile, tensions mount between Qualen and Travers, the Treasury agent that masterminded the hijack. They also mount between Hal and a couple of Qualen’s goons.

Oh, also the extreme sport guys jump off cliffs and parachute to the next level grade. There is a reason I mention them.

Gabe and Jesse manage to beat Qualen and Travers to the next case. He burns the cash and leaves behind the tracking device in a snow man. Hal, despite still hating on Gabe for the whole dead girlfriend thing, can’t help but smile. This leads to a nifty chase and body-sledding sequence.

Come morning, Hal leads Qualen and company to a rope bridge. Just underneath, Gabe and Jesse catch up, only to be caught by Kynette (action mainstay Leon). They fight in a dubious set meant to be the frozen innards of a mountain. It ends with Kynette getting an stalactite through his abdomen. Ouch.

He's running from the reviews for Rocky V.

Around this time, Qualen arranges for the extreme sport guys to meet a nasty end. He also kills Frank, the lovable helicopter pilot played by Pa Walton.

The movie keeps following this pattern of people hating each other until Gabe and Hal have killed everyone expect Qualen and Travers. There’s a scene where Gabe ends up under the ice and another where Hal gets kicked repeatedly by a goon who missed his chance to be a real footballer. It all ends with a helicopter, generous Lithgow acting, and an explosion or two. So Gabe, Hal, and Jesse are right as rain again as they wait for another Treasury agent played by Paul Winfield to rescue them. Sadly, the credits begin rolling before we can see that eventful meeting. 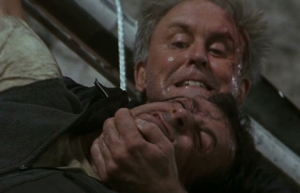 This image is better out of context.

Analysis: In Renny Harlin, Stallone found a decent action director. Coming off of Die Hard 2: Die Harder, Harlin was an in-demand filmmaker and Stallone had the perfect project for him. The action scenes are really well executed, even in the shots where you can tell the filming took place on a soundstage. The fight between Stallone and Leon is a highlight, as is the sequence where Stallone and another goon slide toward a cliff.

It looks this phoney in the movie, too.

The problem here is just how little there is to the film beyond the action scenes. The script only has growing tension between broadly drawn characters to spackle in between the set pieces. Without interesting characters, those tension scenes are rather silly. Stallone has a screenplay credit on this movie, so he shoulders at least part of the blame here. Of course, looking at the films that precede and follow Cliffhanger, it’s easy to see why Stallone played it so shallow.

The film comes directly after the comedies.

This duo of films fills me with dread.

Hot on the heels of the artistic failure that was Rocky V, Stallone set out to recreate his image by returning to the laughter genre with results that dug him further into a hole with the public. They wanted another Rambo, not Stop! Or My Mom Will Shoot. Stallone apologized with an extended action jag that began with Cliffhanger and didn’t end until Cop Land four years later.

Than man made a movie with Sharon Stone to apologize for the comedies, for crying out loud.

It seems that the lack of character goes back to the abundance of character in Rocky V and Stallone’s ultimate displeasure with that film. As a writer, he avoids anything too deep here. All we know about the protagonists is how they relate to the incident at the start of the film. Not that we need to know that much about Hal, Gabe, and Jesse, but since we never really get to know any of them, the jeopardy they’re in isn’t that effective … even with Harlin’s flashy directing.

That lack of character also makes it a perfect Yakmala entry. The main character’s guilt, the back and forth between Travers and everyone, and Frank’s untimely death come off less than dramatic and more comical than anything else. If shit isn’t blowing up, I’m laughing at how po-faced the whole thing is.

So what made the movie so compelling to me in years past? I think its the actors themselves giving their all to a silly script. The Rook never breaks the reality of the film, even when every goon around him couldn’t care less. His shriek of horror when Frank is shot is as close as anyone comes to an honest emotion in the flick. Stallone also keeps it mostly in check. He avoids trying to emote too much and his quips almost seem natural. Then there’s Lithgow as Eric Qualen. It’s a fairly restrained performance from the actor known for uttering “CHRISTMAS II!!!!!” It still has all his hallmarks, though … particularly when his faux British accent gets ridiculous.

We love The Rook.

Special mention goes to Paul Winfield. He was a mainstay of 80s filmmaking, appearing in supporting roles like Captain Terrell in Star Trek II: The Wrath of Khan and Lieutenant Traxler in The Terminator. He also played the featured alien in “Darmok,” one of the most well-regarded episodes of Star Trek: The Next Generation. Winfield is a solid actor who never looked down his nose at a job. In Cliffhanger, he does little more but receive exposition from other actors. He spends most of the film in a helicopter. Sadly, he’s no longer with us … but fans will always view of performance of his and sadly mutter, “Shaka, before the walls fell.”

In the greater scheme of things, Cliffhanger is a fairly minor entry in the Yakmala canon. It’s not a truly bad film, but it is misguided. It wants to be a major motion picture of the 1980s, but, unfortunately, that decade was already a few years gone and the world already viewed the genre — and Stallone — in a different light.

Stallone By The Numbers:

Appearances by Frank: None!

Erik Amaya is the host of Tread Perilously and the former Head Film/TV writer at Bleeding Cool. He has also contributed to sites like CBR, Comics Alliance and Fanbase Press. He is also the voice of Puppet Tommy on "The Room Responds."
View all posts by Erik →
This entry was posted in Projected Pixels and Emulsion, Yakmala! and tagged cliffhanger, renny harlin, rocky v, stallone, the stallone diary. Bookmark the permalink.