Best of Yakmala: The Hand That Rocks the Cradle 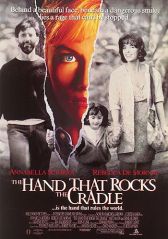 The Hand that Rocks the Cradle is a bad film in spite of the talent at the helm. It’s a rarity in the Yakmala canon as it is a well made picture. The purely visual elements of the film are high quality and Curtis Hanson is a very fine director. His L.A. Confidential is one of the best adaptations of a book made in the last twenty years. People speak fondly of his films The River Wild, Wonder Boys, and even 8 Mile. He’s quite good at at his craft. Unfortunately, craft is not enough to keep this film from entering our domain.

Plot: Mother to be Claire Bartel goes to a new OB/GYN, Dr. Mott. Mott turns out to be a bit of a perv and after he “examines” her, she has an asthma attack. Discussing the incident with her caring husband Micheal (Matt McCoy), she decides to report Dr. Mott to the proper authorities. This creates a cascade of other women complaining about Mott’s bed-side manner. (Oh, the Puns!) Mott, fearing the worst, shoots himself in his fancy post-modern home. Claire presumably finds another OB/GYN without Mott’s proclivities because she has a rather uneventful pregnancy from that point on.

But Mott’s wife (Rebecca De Mornay) goes through some hell. All of her late husband’s assets are frozen because of the pending lawsuits and she miscarries around a gaggle of lawyers. That’s right, a gaggle. Due to complications during the miscarriage, she can never carry another child to term. Distraught and withdrawn, Mrs. Mott decides to take revenge of the woman who began all of this: Claire Bartel.

Because, y’know, Mrs. Mott didn’t have a problem with the good doctor “examining” other women. 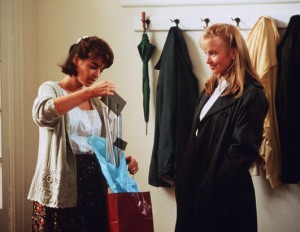 FLASH FOWARD A COUPLE OF MONTHS! Claire has had her baby and the family is enjoying an early spring with help from Magical Retard Solomon (Ernie Hudson in another thankless role). Claire takes on several volunteer jobs, so Michael suggests they hire a nanny to take care of the baby and their older daughter Emma (Madeline Zima). Enter Peyton Flanders. She tells Claire she lost her husband and unborn child within a few days of each other and, consequentally can no longer have children — hey! That’s Mrs. Mott!

So Peyton (I assume Mrs. Mott’s first name is actually Peyton. The film gives us no reason to think otherwise) moves in and begins to slowly take over the mommy duties of the house. I don’t just mean clean clothes and stuff. She starts breastfeeding the newborn.

Thus begins a series of incidents, upsets, and disasters orchestrated by Peyton to isolate Claire from the rest of the family. Peyton’s ultimate aim is to replace Claire. As far revenge plans go, it’s pretty brilliant.

Oops, Solomon catches Peyton breastfeeding the baby. Peyton engineers it so it looks like he’s been bad-touching Emma.

She also manages to get Claire out of the house for a few days and tries to seduce Micheal, but when you remember that she’s Wally George’s daughter, De Mornay’s attractiveness vacilates at 120MHz. Micheal resists.

Claire returns, discovers Peyton’s identity and promtly smacks that would be homewrecker on the nose; like a man. As Justin said ages ago, Peyton goes cuckoo bananas. You can probably guess how the movie ends: with Michael left in the basement with his legs broken.

So What’s Wrong with It? The film’s ultimate failure is the lack of likeable characters. Except for noticing the way Dr. Mott touched her, Claire is incredibly blind to all the things going on around her. She never asks the right questions and behaves stupidly because the plot demands it. Micheal is similar. The movie never really gives us a reason to care about them. I suppose in the mid-1990s, being successful and white was enough material for the audience to latch on. In a rare clothes-on role, Julianne Moore’s Marlene is nothing but bitch, bitch, bitch. From this movie, you’d never think Moore would do any better but Fox Movies of the Week. Even Ernie Hudson, who is generally charming, comes off poorly thanks to the magical shoehorn role that is Solomon. 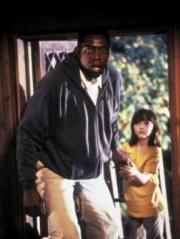 As Justin pointed out a few years back, the only smart and likable character is Emma. This five year old seems to be swayed by Peyton as the movie unfolds, but pretty quickly picks up on Mrs. Mott’s switch to crazy at the film’s climax. Emma goes into horror movie survivor mode at that point and is ten times more heroic than Claire.

At least the movie never actively wants us to root for Peyton.

The Hand that Rocks the Cradle is a thriller without a central protagonist and without a character you want to see survive or defeat her adversary, what is a thriller? The movie gives us so little to root for that it collapses under its own weight. In that cave-in, though, is the root of its Yakmala quality. Just like Staying Alive, the script has complete confidence in its world-view. Claire is impervious to criticism because she detected a bad man. Peyton is Satan’s Daughter because doesn’t go to therapy. As citizens of the real world, there is enjoyment to be had in the bizzaro Earth these character inhabit. Also, Peyton’s systematic disruption of Claire’s life is pretty entertaining; it’s just too bad the screenwriter could not find more satisfying way to tie it all up.

Also, Curtis Hanson brings a deft hand to the photography and even his actors. His one flaw: he commits to this script like it were Chinatown.

Though ably directed, the movie misses its intended mark, and while not a production disaster like, say, The Room, it is a Yakmala film.

Erik Amaya is the host of Tread Perilously and the former Head Film/TV writer at Bleeding Cool. He has also contributed to sites like CBR, Comics Alliance and Fanbase Press. He is also the voice of Puppet Tommy on "The Room Responds."
View all posts by Erik →
This entry was posted in Projected Pixels and Emulsion, Yakmala! and tagged bad touch, Rebecca De Mornay, The Hand That Rocks the Cradle, Wally George. Bookmark the permalink.