Spider-Man: Turn Off the Show 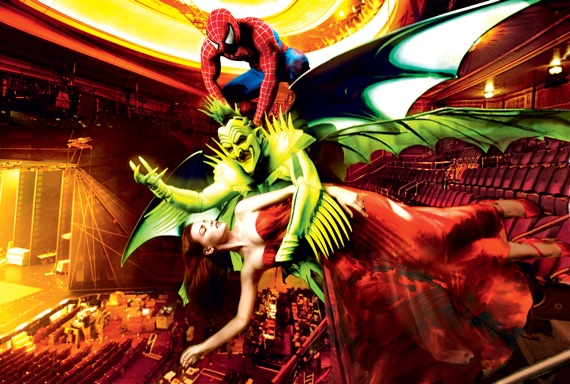 This is the worst Harlequin novel cover ever.

Lieutenant Colonel Terrence Lakin was recently court martialed for refusing to submit to a tour of duty in Afghanistan; he questioned the veracity of Obama’s birth in America, and because of that, he decided he wouldn’t listen to his orders to report back to the war zone. Orly Taitz, Democratic America’s #1 go-to birther nut log, has decided the best way to help Lt Col Lakin was to pitch a musical about him, and is “appealing for Andrew Lloyd Webber to contact her.” Obviously, a musical written by Taitz about the evil, foreign-born sleeper-cell President and the heroic soldier who stood up to his illegal reign of moderate reform would be something akin to watching a drunk hobo shouting about the government’s implantation of a microchip in his brain while he bashed at a Casiotone with his foot.

Still, I’d rather watch that instead of Spider-Man: Turn Off the Dark.

This has been all over the news, especially in the past couple of weeks, as the previews for the show have been like a Saw movie in terms of the injuries involved. But, in case you weren’t aware: they have written a fucking Spider-Man musical. Now, lest you think this is some horrible amateur fanfic made flesh, it’s directed by Broadway legend Julie Taymor with music by Bono & The Edge of U2. So it’s horrible professional fanfic.

Thanks, guys. Nice shades, Bono. You’re indoors, but whatever. And thanks for the story about the dude dying in your apartment, Edge.

Oh, and that part about the music not sounding like U2? Yeah, listen to this and tell me it’s a radical departure, because NO:

Now, I don’t wanna be that guy who tries to limit what comic books can accomplish. I’m not a deep enough fan to know all the narrative ins and outs of the world of Spider-Man, and I believe that comic book properties can be adapted into other mediums with great results (The Dark Knight, Iron Man, Scott Pilgrim, etc). But, when I think of a fun, action-packed superhero yarn like Spider-Man, I don’t think of Julie Taymor’s experimental costuming and grand themes of hope and love and whatever the fuck else Bono was yammering about.

She's swooning from the sheer idiocy of it all.

I don’t know if you’re excited about a chrome Amazon covered in spikes, but I’m certainly not. Oh, wait, she sings? Yeah, still not.

It’s not as though Spider-Man has no right to tackle weighty material; it certainly can and has. But Spider-Man has never been the kind of property where people have said, “You know what would really improve this? Songs and Soviet Expressionist backdrops.” And again, these are all judgments based on not having seen the show. Ultimately, it is unfair to the production for me not to have seen it, and I will take that criticism. But from what I’ve seen and heard, it looks like an ill-advised ball of crap; an attempt to add gravitas and “artistry” to a property that never really required it. The last time this happened, Ang Lee had directed Hulk, and it was godawful and required that the next Hulk movie just ignore it and move on.

And the way the previews are going, will there be any actors left on Broadway to play the roles? The latest and highest-profile injury was when stuntman Chris Tierney fell two stories and broke a bunch of bones. But there have been others: two separate stuntmen were injured trying to perform the same special flying effect, and an actress suffered a concussion after being hit in the head by a rope (this actress just left the show, BTW). Of course, injuries happen on Broadway, but four before leaving previews seems unprecedented. Some have called for the show to be scrapped, but with $65 million pumped into this thing, that would be a hell of a money pit.

What? Yeah, $65 MILLION, easily the most expensive show Broadway has seen, so it’s not like anyone’s back is against the wall or anything.

Right or wrong, good or terrible, the main question I have about Spider-Man: Get a Different Title is simple: who wanted this? Was there really a clamor for a hyper-stylized musical adaptation of a Marvel comic book, or did the U2 gang just punk everyone? Did Edge bet Bono $5000 that he couldn’t walk into a room and lay out the plan for this show with a straight face? What did they do when they realized they had investors? It’s too late for Ashton Kutcher to walk into the Foxwoods and let Julie Taymor know it was all a joke.

"It was totally my taint the whole time!"

I will go on record: if this… production is actually good, I will eat my words. But, please, honestly, does Spider-Man: Turn on The Weather Channel really have the potential to be at least not awful? I’m not holding out much hope. I know people love Julie Taymor for what she did with The Lion King, but she also directed Across the Universe, which few people liked. And who did she work with on that movie?

I rest my case.

Good luck, cast and crew. I hope it actually turns out to be worth it, and that no one fucking dies.

4 Responses to Spider-Man: Turn Off the Show