Food & Wine Thursdays: How to Open a Bottle of Wine

I’m surprised at the trepidation people feel toward opening bottles of wine. This peculiar fear has fueled an industry of (very expensive) products that allege to make opening a bottle of wine “effortless” or at the very least “easier.” 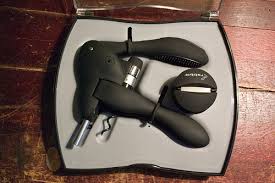 But I promise you that all you need is your basic $8.95 two-stage Waiter’s Corkscrew. It’s so named because it allows you to operate the corkscrew with one hand, which all waiters–being compulsive dice throwers–have to do. 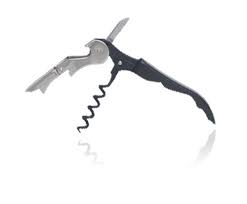 First, remove the foil. I don’t stand on ceremony so in all but the most formal situations I just grab the entire foil capsule and pull it off in one motion. This works on 90% of wine bottles. But you can also take the blade of the opener and run it around and under the lip of the bottle. Carefully pull the blade up to the top of the bottle which should neatly remove the top of the foil. That’s actually the hardest part.

Turn your corkscrew until it’s all the way in the cork or “ball’s deep” as Master Sommeliers say. Push the lever (the usually silver part) against the bottle so that the first stage (the stage closest to the joint) is against the lip of the bottle. Lever the corkscrew up toward the ceiling until it stops. Now, move the lever so that the second stage is on the lip of the bottle and lever up toward the ceiling again. Do the second stage slowly since some shorter corks don’t have much more room to go before they pop out and that could cause a serious mess.

That’s it. It’s really easy. And after a little practice you’ll find it to be the absolute quickest non-automated way to open a bottle of wine. Impress your friends this holiday season.

Oh yeah, and this being the internet and all I’ll do a video and link it up shortly.

I'm a wine professional. Like a real one who makes most of his living in wine and have for most of my adult life. I also write, but you can see that.
View all posts by David D. →
This entry was posted in Dispatches From Academia, Food and tagged corkscrew, Food & Wine, how to open a bottle of wine, Wine. Bookmark the permalink.

1 Response to Food & Wine Thursdays: How to Open a Bottle of Wine