What’s the Moral of the Story? 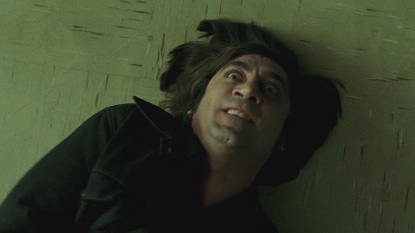 NOTE: This WAS a picture of Chigurh after the car crash, but it keeps fading in and out. So, here's this instead.

Last night, No Country For Old Men was on Spike TV. I know; there are no tits or MMA fighting in the film, which baffled me as to why Spike was showing it. But, they let the movie through almost intact, really only censoring one shot of gore (I’ll get to it in a moment) and cutting a few swears, and it was in HD, so I watched it while Queta finished some schoolwork. It got to the end – a point of contention for many viewers – and Queta turned to me and asked, “So, what’s the moral of this story?”

All I had at the time was, “Don’t get involved with drug dealers.” But, I felt like I should expand now with my previous thoughts about the ending. Queta deserves more.

And, as we’re talking about a recent film, I will activate the Spoiler Shield Generator:

A lot of people complained about the ending, or lack thereof, in No Country. It seems like the lack of proper conclusion was intentional on Cormac McCarthy’s part – an exercise in pure subversion. When you’ve set up a chase between a “good guy” (Llewelyn Moss) and “bad guy” (Anton Chigurh), the expectation is that a showdown will occur in the end. But we don’t get one. Instead, Moss is murdered by the Mexicans before Chigurh even finds him again, Chigurh takes the money (it’s not really spelled out in the movie, but it is in the book), and that whole situation is concluded.

Then we get the penultimate scenes, where Chigurh meets up with Carla Jean. He tells her it’s her time to die, gives her an opportunity to flip a coin for the chance to survive (which she calls him out on – more on that later), and exits the house after killing her. He gets in (I think) her car, and drives away. A couple blocks later, while crossing an intersection, another car T-bones his at full speed. We don’t know what happens to the other driver, but Chigurh stumbles out with a compound fracture on his arm. He bribes a kid into giving up his shirt to use as a sling, and he limps off into the sunset. Cut to a monologue by Tommy Lee Jones, and FIN.

I can understand people thinking they were cheated. However, I think the ending works as is. On one level, I think framing the story as simply Moss v. Chigurh ignores the use of Sheriff Bell (Jones). Really, Bell is the custodian of the story; it’s about his inability to reconcile his “ideals” of the way crime used to be with the brutality he’s seen lately. That’s why he gets the opening narration, and why it’s about a completely different murder that happened a while ago. It’s also why he talks about the couple who took in elderly tenants and murdered them for their Social Security checks. It’s also why there’s a scene between him and another old lawman talking about teenagers running around with green hair and “bones in their noses.” The story is really Bell’s lament about the disintegration of civility, that things were different before. His uncle, at the end, dissuades him of this idea – things have always been brutal and uncontrollable. From that perspective, it’s easier to accept the story’s collapse into randomness. By the end, the “good guy” was killed at a motel as an afterthought, the “bad guy” got away with the money, and a whole bunch of people who didn’t deserve it died. This is what Bell was complaining about: nothing makes sense anymore.

As for Chigurh, he’s seen as some unstoppable force; an Angel of Death. Almost everyone who comes in contact with him dies by his hand. This makes sense for the story throughout most of it, as many of the people he kills are involved in the drug deal, or tainted by it somehow (the two men he’s with when he visits the site of the shootout, Carson Wells, the businessman who hired him). There’s also some collateral damage, though: some innocent people go down as well (the deputy who arrests him at the beginning, the guy in the car immediately after, and so forth). Referring back to his last scenes, we see him kill Carla Jean, giving her the same coin schtick he gave the man at the gas station (whom he spared). She calls him out on his bullshit, saying, “The coin ain’t got no say in it. It’s just you.” And she’s right.

Which is why I think the car crash fits in at the end. If we go into the story with an idea that Chigurh is some divine force, we also understand that he’s ultimately human. We see his vulnerability when Moss manages to hit him in the leg during their brief shootout. He’s not invincible, he’s just a man. And, like any other man, he has his own motives and justifications. He chooses to live by some idea that what he’s doing is predestined; “I got here the same way the coin did.” But that’s not true. He tries to justify that he’s calling on Carla Jean because Moss never made the deal with him to give up the money for her life, even though he has the money, and Carla Jean didn’t interfere in any way. She knows he’s a lunatic, and no matter how everything else went down, she would probably die anyway. Out of all his murders, hers is arguably the most needless. Nothing changes if she stays alive, so why kill her, other than to satisfy his own bloodlust?

And look at that face! Why would you kill that?

Which is why I think the car crash was included. It’s important that the crash is set immediately after he kills her. I feel the crash was, in its own way, some divine punishment for Chigurh. He acts as a force of nature, cleaning up the mess that the drug money left in its wake. But, as a human, he can overstep his bounds, and Carla Jean’s murder is his most egregious offense. He serves a grander purpose in a way, so he’s not killed outright, but the crash is a strong warning that he really didn’t need to kill her. Note how he exits the scene: he bribes the kids and walks away. He could’ve killed them and ran – he’s done worse for less. But he gives them a fifty and limps away, arm in a sling. It’s the closest to humility Chigurh ever gets.

So, what is the moral of the story? Well, honestly, it still comes down to something like, “Don’t get involved with drug dealers.” But, in a broader sense, the story deconstructs “good” and “bad,” as well as our expectations of how the fight between them plays out. We’re not going to get a neat answer, where the good guy fights the bad guy to the death and comes out victorious. The bad guy’s going to win sometimes, and the results are neither pretty nor glorious. I think that’s where people’s offense to the ending of the film stems from: it knows it’s not a satisfactory conclusion. Tough noogies.

Still, I want a silenced shotgun. That’d be sweet.

SUCKERPUNCH!
View all posts by Louis →
This entry was posted in Home of the Bizarre Rant, Projected Pixels and Emulsion and tagged car crash, compound fracture, deconstruction, no country for old men. Bookmark the permalink.

10 Responses to What’s the Moral of the Story?