Firstly, yes, there is a Neverending Story II. It stars an actor who took his own life and is, on its own, a fairly boring movie. We’ve screened it at Yakmala, but I wouldn’t call it one of the more memorable ones. It loosely follows the second half of the novel, in which Bastion loses a memory every time he makes a wish with AURYN. (Get ready for a pronunciation note) Falkor, the Rock Biter, and the Child-Like … er, EMPRESS MOONCHILD!!!!!!!!!!!!!!!!!!!!!!!!! all make appearances. At some point, I might dissect this one, but I think we need to move onto the third film in the cycle.

In the film-blogging world, there’s the often-used, overly dramatic claim that a remake or sequel “raped my childhood.” I thought this concept to be hyperbole of Olympian heights … then I saw “The Neverending Story III” and learned one’s childhood can be violently violated through the eye, doused with lemon juice, and re-violated without the courtesy of a night’s rest. And keep in mind I never used the wildly popular rape metaphor for ANYTHING.

WHAT THE FUCK IS JACK BLACK DOING HERE?

Bastian runs into the school library where Mr. XXXXXXX, the kindly bookshop owner from the previous films keeps the card catalog in check. In this film, he’s played by Freddie Jones, who played Tufir Hawat in DUNE (I haven’t forgotten about my unfinished analysis of that film). I’m not going to go to far into why a magical book shop owner would now be a jr. high school librarian, but maybe he’s part of the Watcher’s Council or something.

Yes, that was a Buffy reference. This movie makes me go for cheap jokes.

The two discuss the BOOK. Mr. Willywaggle does not want him to touch the thing, but Bastian grabs it, as he often does, and the BOOK tells us about the protagonist’s struggle:

After returning from Fantasia, Bastian’s dad … “Mr. Bux” re-married and moved into the home of his new wife. She has a daughter, so Bastion now has a step-sister who finds his talk of luck dragons and talking wolves quite disconcerting.

So Bastian wishes himself back into Fantasia, figuring Jack Black and his band of “Nasties” are too illiterate to read. Once he arrives in Fantasia, he learns from the gnomes, Falkor, and a talking tree that the land is under threat from “The Nasty.”

So Jack Black starts making trouble for Fantasia. After Bastian, the Gnomes, the tree, Falkor, the Rock Biter and Rock Biter’s Son all arrive at the place where they keep the Fantasia version of the BOOK, it is decided Bastian must return to the Real World and defeat the Nasties before there nastiness infects all of Fantasia. 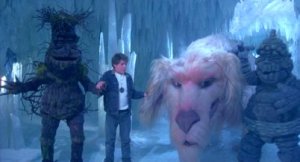 Bastian returns with the Rock Bitter Kid, Falkor, the Gnomes and the Tree. Although, he doesn’t know this going in … they all got caught up in his magical wake and must make there way to him. That’s right. This is the golden premise that got this film made: “This time, they’re in our world.” Seriously? No, seriously? The plot of “Masters of the Universe”,”Beast Master 2: Through the Portal of Time,” and other classless, cheap fantasy films? For reals?

Meanwhile, Bastian sister finds AURYN and begins making wishes with it to no ill-effect on her memory. I’m going to put the pronunciation note here because describing the sister’s wishing spree will give me a migraine. In the book AURYN is always used as a proper noun without a definite article, indicating its own autonomous power. In this film, it’s just the Auryn, a magic wishing necklace. While this might seem small, it’s indicative of the outright cynicism at work in the film. They just didn’t care. 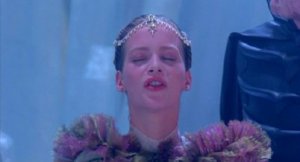 Let’s look back on the series for a moment. We’re had Falkor and Atreyu cross the land of Fantasia only to fly around its shattered remains. We’ve had Bastian and Gang make their way from a castle shaped like a hand to the Silver City surrounded by a lake of acid. We’ve had a amazing vistas and matte paintings and in this shoddy, cut-rate film, our climax is set in a mall.

Bastian and sister learn to work together, the Fantasians are returned to their world, MOONCHILD!!!!!!!!!!!!!!!!!!!!!!!!!!!!! regains her composure, and the Nasties are converted into nerds thanks to Falkore scarring them and Bastian breaking out some kung-fu. No, really. Sister writes into the BOOK. Also, I think, AURYN is returned to the land of dreams and stories.

But I’m left weeping. This is actually a bad movie in its purest form: it’s cynically made. The best Yakmala movies are works of passion. The filmmakers desperately believe in their work despite a lack of money, talent, or simple competence. “The Neverending Story III” is a special beast that burst from the chest of the following thought, “Dumb kids will watch anything.” Consequently, the film has no respect for its source material, the previous films, or kids everywhere. Every mistake can be traced back to the belief that you do not have to work very hard to make a kid’s movie because they don’t know better.

And I guess sometimes, it’s true.

(Looking for images to go with this write-up, I’ve found most people do in fact weep openly after watching The Neverending Story III. It’s “Magic Mirror Gate” of film-blogging.)

Erik Amaya is the host of Tread Perilously and the former Head Film/TV writer at Bleeding Cool. He has also contributed to sites like CBR, Comics Alliance and Fanbase Press. He is also the voice of Puppet Tommy on "The Room Responds."
View all posts by Erik →
This entry was posted in Nerd Alert, Projected Pixels and Emulsion, Yakmala!. Bookmark the permalink.