The Zombie Apocalypse Meets Its Match

Zombie movies are this generation’s uplifting sports drama; no matter how stale, we just can’t get enough. Survival horror, of which the zombie film is the poster child, works because no one is safe, but if they’re really lucky, pack a gat and play ball, one or two characters will make it through. If only the Zombocalypse was like the 1992 US Men’s Olympic Basketball Team. We wouldn’t have to watch annoying and useless characters stumble blindly for the movie until the evitable bite turns them geek. Even the useful characters die, usually because they’re surrounded by idiots. Imagine if we could assemble the perfect team of survivors. With this group, not only does everyone make it out alive, the zombie apocalypse turns into so much half-rotted mulch on the highway.

The Leader – Sheriff David Dutten (Timothy Olyphant) The Crazies remake
Okay, so maybe Sheriff Dutten doesn’t have the best track record. The fact of the matter is very few leaders in these films do, especially ones with coherent plans. So Dutten only managed to get one person out alive. There are two mitigating factors: a) she was a pregnant woman, so way to prioritize the continuation of the species and b) he had to deal with armed zombies, the US Military and a fucking nuclear bomb. Show me someone else that can do that. The alternate would be Ben of Night of the Living Dead. His track record is even worse, but this guy had maybe the worst group of survivors of any hero before or since. When the most useful people in the group set fire to the only means of escape, that’s a problem. Sure, Ben didn’t have the best plan, or even a plan, but he did keep that short bus alive long after everyone should have been shotgunning bleach.

Any chance you didn't see that?

The Enforcer – Selena (Naomie Harris) 28 Days Later
In a zombie movie, it’s imperative that the leader’s orders be obeyed without question. One slip-up means certain death, and any death means another one of them. You know what I’m talking about. Selena’s a person that knows the stakes and acts without hesitation or conscience to see that things get done right. What happened when that geek might have turned Mark? Selena chopped her only friend into chum without even blinking. She’s also incredibly resourceful: in gun-free England, she makes do with a machete and Molotov cocktails.

Did someone say chainsaw hand?

The Q – Ash (Bruce Campbell) Evil Dead Trilogy
Survival horror is about using what you have, not what you wish you had. What you need is a man of singular vision. You need a man who looks at a station wagon and sees a whirling-bladed death-tank. You need a man who looks at a chainsaw and sees a workable prosthetic. The one problem with Ash is he needs a short leash. No letting him fraternize with the locals, no letting him put his hand into evil places and above all, if the Necronomicon should be found (it seems to follow him around like a puppy), it’s best to let someone else – anyone else – read from it.

And don't stare at me, you got the bug eyes.

The Wheel Man – Peter (Ken Foree) Dawn of the Dead original
Oftentimes, the reason that people get eaten in zombie movies is because they hole up someplace and wait for the ghouls to get in. Remember your Muhammad Ali: float like a butterfly, sting like a SEAL team. It’s possible Ali never said that. Anyway, the best vehicles for floating through ghoul country are some form of converted big rig, RV or better yet, a helicopter. Peter has those bases covered and and he delivered one of the coolest lines in the history of zombie movies. If you have to ask what that line is, you should probably stop reading now, because this column probably reads like stereo instructions in Basque.

Son of a bitch! I just bandaged that!

The Doc – Scarlet (Rose Byrne) 28 Weeks Later
While zombie-related injuries are untreatable, there are numerous other hazards in a post-apocalyptic world. Roving packs of bikers armed with conventional weapons are always bothering heroic survivors, to say nothing of the potential for scrapes and bruises while fleeing the undead. Medical personnel are in short supply in zombie films, but Scarlet would be an auto-include even in a packed field. Other than her medical skills, she went through Army basic training, so you have another gun on your side. Plus, this is Rose Byrne we’re talking about, so it’s not like she’s hard on the eyes or anything. Heh heh. I said “hard on.”

You've got some red on you.

The Average Joe – Shaun Riley (Simon Pegg) Shaun of the Dead
Every zombie movie needs an average Joe to put things in perspective. It helps if the Joe is decent in a fight and if he reacts appropriately when one of his loved ones is inevitably turned. Lionel from Dead Alive almost got it due to his impressive lawnmower skills, but he spent way too much time with Mum before he got wise and made six hundred gallons of geek chowder. While Shaun doesn’t kill Ed, he does take out his mom, and besides, he’s hell with a cricket bat. 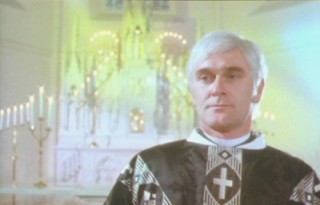 The Holy Man – Father McGruder (Stuart Devenie) Dead Alive
When Hell is full, the dead will walk the earth! You need a man to kick ass for the Lord! Father McGruder, kung fu master and Catholic priest, is the only choice. Sheriff Dutten will have to keep a close eye on Father Mac so that he doesn’t get carried away with all the asskicking and get turned into a snack. Until that moment let the zombies beware the mighty boot to the head!

I bet I can get this to come out his taint!

The Killing Machine – Tallahassee (Woody Harrelson) Zombieland
Okay, so all the bases are covered, except for one thing: who actually kills the damn ghouls? Every team needs one guy whose only job is to be giant dick to the apocalypse’s hapless zombie couch. Tallahassee killed a zombie with a banjo. With guns that he seems to be able to find with remarkable ease, he’s the cure the plague’s been wanting.

The Dog – Beast (Striker) The Hills Have Eyes original
Are dogs necessary? Hell yes. Unless someone on the team has super senses and can warn when the sneakier ghouls approach, you need a dog. You need Beast, the revenge-driven German Shepherd and true hero of The Hills Have Eyes. When mutant hillbillies kill Beast’s mate, he decides to go hunting, racking up the biggest bodycount in the film.  Sadly, I couldn’t find a picture of Beast, probably because he tore the throat out of any photographer who got too close.

Author, mammal. www.captainsupermarket.com
View all posts by Justin →
This entry was posted in Projected Pixels and Emulsion and tagged apocalypse, dream team, zombies. Bookmark the permalink.

12 Responses to The Zombie Apocalypse Meets Its Match