In any given television season, dozens of shows premiere. Lucky are the (maybe) dozen that get another season, and luckier still are the ones that go beyond that.

What this, of course, means is that a bunch of other shows are scrapped by end of season, many before then. And each year, there are the shows that don’t make it, accompanied by viewer outrage that they were canceled. Now, a lot of the time, I understand why these shows are scrapped. Most of the time these are niche shows whose fan bases overestimate their appeal, like “Jericho” (linked above). CBS canceled it after its first season due to low ratings, its viewers staged a public revolt, CBS brought it back for a small second season, and the ratings were even lower.

Now, honestly, I don’t watch much series TV. Queta’s got her shows she loves, and I’ll watch with her sometimes, but other than catching up with “House” or “SVU” occasionally, I don’t watch a whole lot of scripted shows. So I never really get into the whole “Save Our Show!” rigamarole that scripted series can engender. However, there was one exception:

“The Middleman” was a program on ABC Family (BARF, I know, more on that later) in the summer of ’08. The plot is as follows: Wendy Watson is a struggling artist working a day job. After being involved in a monster-based problem at the lab she worked at, she is recruited by someone who only goes by the name “The Middleman.” He’s not quite a crime fighter; like the Men in Black (obviously an influence on the show), he’s there more as a fixer to keep problems from getting worse. She becomes his intern of sorts, and each episode involved some ridiculous sci-fi plot that, if unchecked, would inevitably lead to the end of the world, or galaxy, or whatever.

Now, “The Middleman” was neither hard, nor serious, sci-fi. I think “Doctor Who” is more rigorous in its fidelity to scientific law. But, neither was it completely silly. As absurd as the plots would get – and some were ridiculous, like a kung-fu master in a war with the Lucha Libre, or Dr Phil revealed as a hunter of humans – they were played as straight as possible. The fourth wall remained standing.

Why was this show great? Simple answer: it was just fun. Each show was little more than an excuse to reference-drop, and film geeks were well-served. So voluminous were the references, that the references and fake names were often based around one movie per episode (i.e. the entirety of one episode’s name-drops and shout-outs were from Back to the Future, coming to a head when a radio station Wendy and Middleman investigated was named KBTTF). Beyond the nerd trivia contests, Wendy and Middleman made a very entertaining duo. Wendy (played by Natalie Morales, and not the anchor on the Today Show) was an offshoot of the Manic Pixie Dream Girl; much more cynical, but still a near-impossible combo of geek cred and beauty. 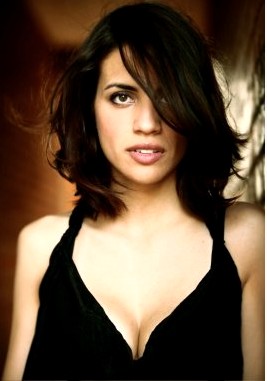 Even more intriguing, though, was the Middleman. Played by Matt Keeslar (whose biggest roles were in Art School Confidential and Waiting for Guffman), he was the embodiment of Chet Squarejaw; a straight-laced Boy Scout who drank his milk every day. However, his quaint mannerisms couldn’t be confused with naiveté, as he always understood the gravity of the problems at hand. Together, they had a great rapport; his Sgt Friday countered by her sarcasm. A high point in the dialogue was his aversion to swearing, leading to an array of ridiculous exclamations:

The supporting cast was fine as well, the highlight being Ida (Mary Pat Gleason), Middleman’s android assistant. Like the TARDIS, she’s supposed to be able to take any form, and, also like the TARDIS, she got stuck – in her case, as a crotchety librarian. She was even more sarcastic than Wendy; one repeated joke involved her insinuating Wendy was stoned in ever-more entertaining ways.

The stories were just a campy good time as well. The season played like a checklist of sci-fi tropes. There was a zombie episode (where the zombies ate fish), a vampire episode (vampire puppets, actually), an episode about alien war impacting Earth (in the form of a 14-year-old girl who is actually an alien warrior trying to stop a boy band, who are actually generals of a hostile alien race), and the de facto series ender: the parallel universe episode (where Earth has been ravaged by the show’s Steve Jobs stand-in, and Middleman becomes Snake Plissken). Nothing is taken too seriously, as the show itself knows how goofy it all is. Above all else, “The Middleman” was entertaining because it was simply fun to watch.

So, what happened? Ultimately, I blame ABC Family for two reasons. One, it wasn’t the right channel for the show. In the same season, ABCF also premiered “Secret Life of the American Teenager,” by all accounts an abomination of television, and that went on to be the channel’s flagship series. It wasn’t the right audience. “Middleman” would probably have been a better fit for – god help me – Sci Fi Channel (I refuse to write SyFy). It is the closest in terms of demographics and tone, and probably would have stood a chance at a second season there.

However, once ABC Family had it, they didn’t seem to know what to do with it. It had a decent pre-premiere marketing run, but once it began, they dropped almost all promotion for it. Barely a few episodes in, I don’t think I ever saw commercials for it. Even during the credits of one episode, where channels usually reserve that time to promote the next episode, they were running commercials for other shows. And, especially given cable’s predilection for rerunning the hell out of their programs, they barely showed “Middleman.” It played on Monday nights at 10, with a repeat at midnight the same night, and that’s it. No other time the rest of the week. Hell, they were rerunning episodes of “8 Simple Rules” more often than that. It seemed like they were actively killing the show, especially given that the “de facto” series finale wasn’t supposed to be the end of the season. They had another episode set after that which was written, but cut from production. But, all is not lost: in researching this post, I found out the complete series was released on DVD, which I will have to buy as soon as I can.

It’s a real crime what happened to “The Middleman.” One of the more promising shows in recent memory, there were few limits as to where it could go had it been renewed. It was well-written, and had great characters, and – above all – it was just a blast to watch. But, instead, we have “Secret Life of the American Teenager.” So, evil does win.

SUCKERPUNCH!
View all posts by Louis →
This entry was posted in Projected Pixels and Emulsion and tagged a repreciation, nerdy show, rosario dawson's doppelganger, the middleman. Bookmark the permalink.