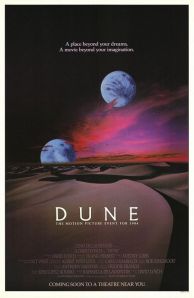 From an early age, I was intrigued by David Lynch’s 1984 telling of Frank Herbet’s novel and how it is just off-kilter. It doesn’t play by the rules of sci-fi movies established in the previous six years. Consequently, I went on a quest in my younger days to understand why the film doesn’t work.

Turns out, it does.

A feature film version of Dune was long in development. Comic book writer/art filmmaker/general weirdo Alejandro Jodorowsky attempted to make the film in the early 1970s. He assembled a team of artists including Moebius, H.R. Giger and Dan O’Bannon to help conceive the alien landscapes of depicted in the novel. He cast Salavador Dali as the Padishah Emperor Shaddam IV. Jodorowsky was prepared to take big departures from the novel, including the planet Kaitan being made entirely of gold and capable of space-flight. Many of these ideas would work their way into the linked comic series “The Incal” and “The Metabarons.” This film never happened because, well, Hollywood was scared shitless by Jodorowsky and his ideas. 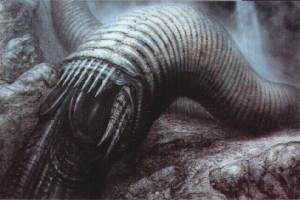 A little while later, Ridley Scott began developing Dune for producer Dino De Laurentiis. Scott intended it to be his follow up to Alien. Unfortunately, his older brother passed away and Scott decided to work on something he could shoot much quicker. Oddly enough, this turned out to be Blade Runner. But that is another story …

De Laurentiis prevailed upon David Lynch to take up the helm. Lynch had just found mainstream success with The Elephant Man and had plenty of offers around town. George Lucas wanted him to direct “Revenge of the Jedi,” Universal wanted him to take on “Fast Times at Ridgemont High.” At the time, Lynch felt is was important to establish a relationship with the studios and make a big feature, but when you consider these two projects, it makes the choice of Dune a little bit clearer.

With its mind-altering spice drug, empathic sisterhoods, and occasional flights into prophetic dreams, it does seem a natural fit. The novel is written in a very interior way; all the big action set pieces happen between chapters, with the characters then reflecting back on them. The characters are all trained and obsessed with sussing out the true intentions of other characters by judging the slightest slump of the shoulders or sweat on faces. Everyone engages in odd behavior, but sees is as normal. Sounds a little like Twin Peaks, doesn’t it?

Lynch did fall in love with Dune and was signed to do a sequel. He intended to make “Children of Dune” and follow the story into its next phase with the true Kwisatz Haderach arriving. Sadly, the failure of the film and his treatment by the studio has made Lynch reluctant to comment on the film.

As I’m a little short on time this week, Dune will continue with an exploration of both available cuts and the myth of the six-hour version.

Erik Amaya is the host of Tread Perilously and the former Head Film/TV writer at Bleeding Cool. He has also contributed to sites like CBR, Comics Alliance and Fanbase Press. He is also the voice of Puppet Tommy on "The Room Responds."
View all posts by Erik →
This entry was posted in Projected Pixels and Emulsion and tagged 1980s, david lynch, dino de laurentiis, dune, movies, muad'dib. Bookmark the permalink.

6 Responses to Dune: A Preamble