In today’s installment of Kat’s Corner (the popular radio feature in which I tell stories from my exciting life), we discuss the all-consuming problem that at one point or another has caused most of us great consternation: finding the perfect roommate.

Relax, Social Playgrounders, I have not ditched my husband and cat. But while talking with a friend tonight about her current roommate-search-struggles, I was reminded of the huge weight placed upon the semi-stranger whose access to my life and bathroom gave us an immediate and forced intimacy that could be only witnessed elsewhere between war buddies, perhaps. And that makes me reminisce… I recall the times in college when inebriated boys and heartbroken girls were dragged home by other just-turned-18-year-olds, and the campus police and concerned onlookers were calmed by the reassuring, “Oh, don’t worry, we called his/her roommate. He/she’ll be fine.” What does an 18-year-old know about caring for the sobbing and crushed? Or, I shudder to think, for those suffering from alcohol poisoning? Yet in 1998 the sharing of an analog answering machine made you more than classmates- you were family.

And once we made it out of college and ventured into the bright world of temping while trying to figure out What I’m Going to Do With My Life, we found more grown-up apartments (eek, credit checks!), which necessitated finding our own roommates. Without Campus Housing Administration to choose them for us, we were forced to post on roommate message boards, and the black hole known as Craigslist. I know, everyone out there has a story of how with the help of Craigslist they found the perfect couch, sold their TV for twice its value, traded their yak to a bushman, whatever, but the fact remains that when you use a tool so vast and indiscriminate, for every one normal respondent, you get a lot of weirdos. When you advertise a room for $300 a month, you get a lot more weirdos.

In the summer of 2002 my friend Kari and I, then housemates in a quirky little part of San Diego, were looking for someone to live in our third, and vacant, bedroom.

We used the message board at UC San Diego, as well as a site called roommates.com (the current format of this service is a shadow of what it once was). We got a bevy of interesting applicants, and settled on a tennis player who supported himself by moving furniture on the weekends. He was a lovely guy who moved away to be closer to his favorite tennis courts. When our tennis player left we tried roommates.com, but didn’t get many responses, so we tried Craigslist. My email in-box was flooded by so many emails I started dividing them into 2 folders upon receipt: “WINNERS 04” and “LOSERS 04.” This folder was full of people like BadBoyMike228:

We never called back any of these charming fellows. Too needy. Then we got this response from Ben:

i am am inquiring about the room for rent that you have posted on craigslist.org. i am looking to move into a place as soon as i return to san diego, i am currently out of town until july 7th while i visit back east.
about myself, i am 27, male, i am a full time student study advertising and graphic design, i work in the area, i cureently live in north park and would like to stay in the area, lets see what else…..for leisure i like to hang out with friends, watch movies, hop from dive bar to dive bar, i do a lot of photography and artsy fartsy things, pretty much i like to do anything that keeps me entertained when i’m not at school or work. although i moved to san diego i am not much of a beach person, odd. my only two faults are that i do smoke, however this is limited to outdoors and street corners and also i am a bit of a night owl. other than that i am 100% A-OK.

i suppose thats about all i can think to write at this time. please contact me if you have any further questions, comments, or anything else. thank you.

Other than his apparent aversions to the Shift key and spellcheck, Ben sounds pretty good, doesn’t he? He was our top pick until he came by for the interview… high on speed. Or meth. Possibly both. Next!

We ended up going with Abe, a very cool person despite his unfair resistance to us calling him “Babe-raham Lincoln.” We lived with Abe for about a year and a half, then had to search again in 2004. *sigh*

We rejected Craig based on his email address alone: reallyspecialed@…

Jenna was one of our top picks early on. She was very sweet and polite, but she was in massage school and offered to give us free massages as part of her homework. I know some people would jump at this opportunity, but it skeeved me out, and she was so nice I couldn’t say “Your offer skeeved me out.” So instead we told her we were going with someone else.

That’s when we heard from Michael:

I love your ad at least it was open and kind. At the moment I am in between places thanks to my stupid partner bnut thats a different scene altogether. I recieve a check on the first from my dads death benifits and $390.00 is so in my budget. Though I like the taste of alcohol not beer I am not much a drinker. But I love smoking the medicinal stuff so if that is a problem I will understand.

Surprisingly, we felt that Michael was not a good fit.

Presumably Michael on a good day

We also met with an effeminate young man who worked at the Hustler store downtown, who showed up at our house carrying fancy cheese. He had expected us to have crackers in the house and when we told him we didn’t he was dumbfounded when we couldn’t enjoy his little offering in the manner he had been expecting. Kari and I found it odd that he tried to turn our roommate interview into a cocktail party, and pushed the cheeseplate back and forth on the coffee table, silently daring each other to taste it. Neither of us did, but perhaps that’s because he excused himself to take our portable phone outside and carry on a 45-minute call to his boyfriend, who apparently he suspected of having one foot out the door. When Kari called him later to tell him we were going with someone else as our roommate, he screamed at her that she was a homophobe and a bigot. She didn’t tell him that his sexual orientation was the only thing we felt was normal about him.

We eventually found a very nice guy who only needed a place to stay 3 or 4 nights a week, since he was in town on a long-term contract job assignment. He’d bring home take-out every night, fall asleep watching TV in his room, and never hogged the bathroom. Perfect roommate, and we stayed together until his contract was up, and Kari and I both felt it was time to move on from San Diego. But we had to meet a lot of duds during the search.

When you think about that aforementioned forced intimacy, what really made it generally easier to cohabitate with a college-assigned roommate than a stranger? While I had my occasional issues with some of my university-assigned roommates, none of them were the kind of social deviants that Craigslist matched me with. Was it that other people screened by your university’s admissions department were perhaps more like you, assuring a greater likelihood that you’d get along? Do the Housing office people actually put thought into the assignments? Or is it totally random chance? 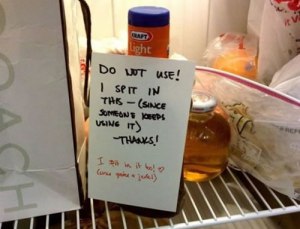 Thankfully we never encountered this problem

Whatever the distinction, the road to roommate bliss is paved with freaks of nature. Yes, as a special treat to my faithful listeners/readers who have made it through this sordid tale I’ve saved the best for last: the all-time worst response to a seeking-roommate ad. First prize goes to Michael A. Ludwig, a sergeant in the Marine Corps.

Hey girly,
Sounds like you’ve got a good thing going over there.  Unfortunately, my girlfriend wont let me live with other women in the house.  She says I’ve got that “wandering eye.”  Whatever.  Are either of you ugly?  Maybe that would make her more comfortable?

Now, I typically don’t post people’s identifying information, but wow, does he deserve it.

No problem about your wandering eye- I have a lazy one of my own. That’s okay if you can’t be our roommate. Good luck on your search.

I am always this shocked.
View all posts by Kat →
This entry was posted in Kat's Corner and tagged roomates, Social Playground, weirdos. Bookmark the permalink.